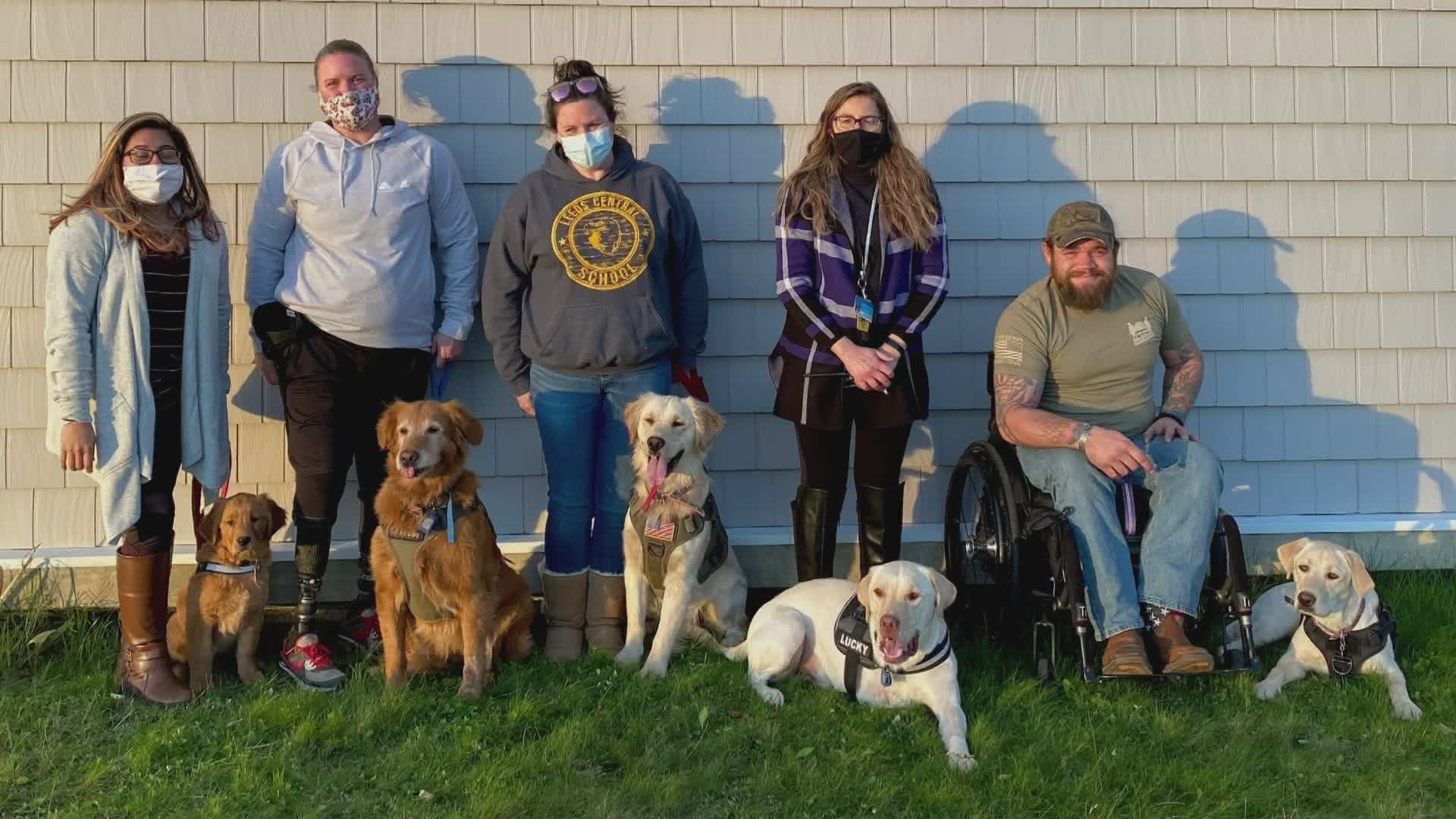 LEEDS, Maine — We here at NEWS CENTER Maine met Lucky at the start of 2019. Army veteran Christy Gardner was training him to be a therapy dog, and she brought him by the news station, while he was training with her older service dog, Moxie. Lucky was born a little different, with a right paw that didn't form correctly; eventually his leg was amputated; sparking an incredible connection between him and Gardner, a double-amputee herself.

That was just the beginning of Lucky and Christy's story, now captured - in part - in a children's book; "Lucky: A Little Guy With A Big Mission."

Lucky is now a therapy dog at Leeds Central School. His new handler brought him to Christy's home, so we could spend some time with him, Christy's two new trainees: Doug and Libby; and her first service dog, Moxie.

"Lucky was my tenth, but my first special needs puppy, so it's a little different and I think we have a special bond because of it," Christy explains. "He's also the first puppy that Moxie actually liked."

The puppies love to play, but their ultimate mission will be to serve a much higher purpose.

"The plan with Libby is to train her as a service dog or therapy dog, and if she does well with her training she could be certified as a working dog and enter that field, or be assigned to a person; and then if she does extremely well - as we expect - because so far, with temperament and intellect she's been phenomenal; if she passes all of that and her physical and her joint certification and heart certification we hope to use her for breeding for the foundation so we don't have to buy puppies. We will breed purpose-bred dogs," Christy explains; adding that buying a puppy with proper lineage can cost between $3,000- $4,000.

RELATED: Puppy with missing wrist bone being trained by wounded veteran to help others

While she's been training dogs for years now; Christy started her own foundation in the spring called, Mission Working Dogs.

"There are so many people in need of service dogs; other schools or hospitals, even the VA that want therapy dogs, but I can't keep up with the training myself so we formed the foundation," says Christy. "Now we have a board of veterinarians and other trainers and we're looking for a puppy raisers to help raise the puppies until they're ready to go into school."

"Most of mine have gone on as therapy dogs for schools or hospitals, so seeing the impact they make for those folks and then the few that are veterans' service dogs and seeing the veteran either get out of the hospital or go back to school; go find a job and actually be comfortable working; or even if they're just homebound, getting out to get a little exercise... getting around the neighborhood, because the dog will say, 'I need to play, I need to walk, I need this, I need that,' and if you care for them enough you'll set aside your own needs and want to take care of them. So even if you are scared to leave the house, the dog needs to leave the house so you go with the dog," Christy explains. "The dog is a great icebreaker out in public; I've noticed with her when I walk around stores, people don't look at my legs, they look at the dog. All the questions are about the dog and not what happened to me."

While Christy has gotten pretty good at sharing her story and teaching others about these working dogs, it took a little nudge from a New Hampshire author to help spread her message even further; enter Eileen Doyon.

"I was looking for a mission because I had done eight books and there was still something missing that I wanted to do," Eileen explains. "I was looking at my Facebook feed one night and - I'll probably cry - I was going through my Facebook feed and I saw Christy's interview with Steve Hartman, 'On The Road Again.' My father was a Marine, that's kind of how I started my book series. My father died of lung cancer in 2011, but veterans have been very dear and near to my heart - along with my husband's - and I really wanted to make a difference."

"So I said, 'Oh my God, this is it. This is my purpose.' How can you not be inspired by a double amputee Army veteran who never gives up on anything?" Eileen asks. "So I messaged Christy, I said, 'Hey Christy, I just saw your interview with Steve Hartman, can I do a children's book about you and Moxie and Lucky?' and she said sure. That's how it started and I have to be honest with you, I've never done a children's book in my life."

The book, Lucky: A Little Guy With A Big Mission – takes a few fictional twists and turns, but ultimately shares the story of overcoming challenges and finding new ways to navigate a world that's a little more difficult for a three-legged pup.

"I really believe the book is for people between two and 92 because it teaches us that being different is okay," says Eileen.

Christy agrees; "The point of it originally was to tell his story, but the effect of it is really just to enlighten people on accepting differences and - I'm not saying moving on - but pressing forward. You can achieve so much in your life if you can set your mind to the goal or ignore the issues or find the silver linings in things like that."