Craig Grossi rescued his dog Fred from an Afghanistan battlefield; but it's the work they're doing with veterans in prison that inspired Grossi's second book. 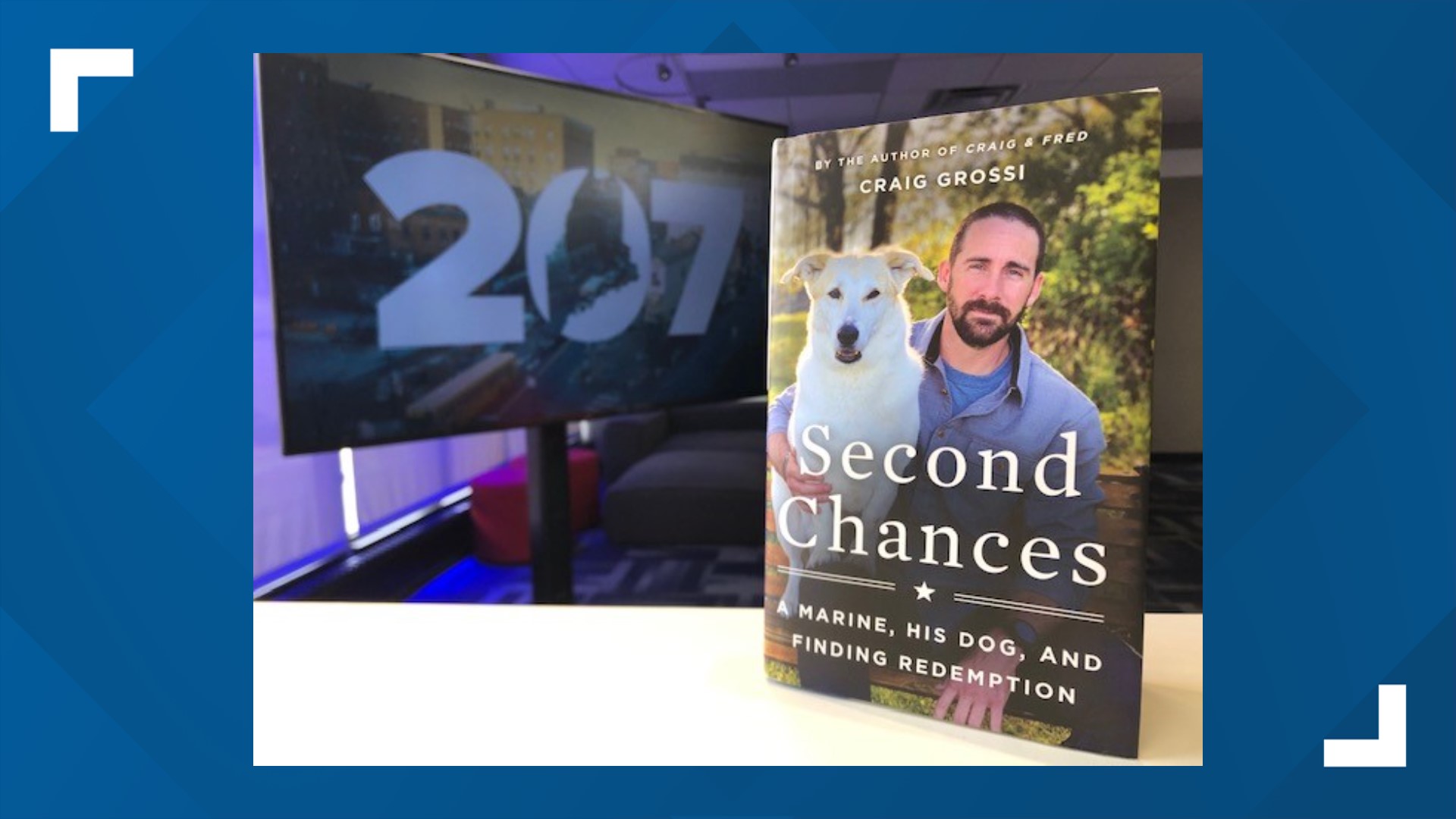 WARREN, Maine — There are so many stories of people rescuing dogs, and dogs rescuing people right back, but this one is unique. Craig Grossi found his dog Fred on a battlefield in Afghanistan, and while the stray and the Marine really did rescue each other more than 6,000 miles away, it's the work they do in Maine that inspired Grossi to write about Second Chances – and how we can all find redemption in the most unlikely of places.

"I found Fred in late summer of 2010 in Helmand province specifically Sangin, Afghanistan. It was an area that was seeing a lot of violence. We were losing a lot of Marines at the time to IED's and Taliban fire," Grossi explains. "In between gun fights and just holding our ground we would look over our shoulders and we would see this funny dog just trotting around the battlefield."

Fred was one of many strays in Afghanistan, but Grossi and his fellow Marines knew this dog was special. While others roamed in packs, Fred bounced around on his own. "The kid in me kind of took over. I wasn't a Marine on a battlefield, I was just a guy who loves dogs," Grossi says. "Then I was walking towards him with a piece of jerky and he wagged his tail, which was the last thing I thought that he would do."

"Before we left, we broke down our camp and we moved miles outside of town away from the Taliban so we can have real space to sort of see around us for the next 24-48 hours waiting for helicopters to come pick us up. And I thought, 'Alright, if he comes with us through the desert then I'll know,' because it didn't make sense for him to do that. There wasn't food out there, there wasn't water... and the next morning we woke up and we saw this little dust bowl coming through the desert in the hot sun and it was him," says Grossi.

"He had sniffed us out and followed us for miles through the desert and found where we had gone to. I was like, 'Okay, let's start to put together a plan...' We've been on a pretty amazing adventure ever since."

Their unique bond is an incredible story on its own, inspiring Grossi to follow a new passion and write his first book, Craig and Fred. But their journey took a new turn when the two stopped by the Maine State Prison after someone suggested he meet then-warden, Randall Liberty.

"I was Army," Liberty tells us. "I am a retired Command Sergeant Major and I had the honor of serving in Iraq in Fallujah."

RELATED: The challenges and rewards of growing vegetables in prison

Liberty thought Grossi might have something to offer their veterans. After a few visits, Grossi began a writing program at the prison, which is the focus of his second book: Second Chances. In the book, Grossi writes about how Liberty treats the inmates like human beings; fellow service members.

"For me it's about dignity and treating people with respect," Liberty explains. "It's also important to remember these are incarcerated Mainers. They're still Mainers, they're still Americans, most of them will be released back into the community. If you treat them with respect and dignity they'll have much better outcomes."

"I saw myself in a lot of the guys," Grossi says about his first interaction in the veterans' pod. "I saw myself in especially Michael Kidd, who had to come home to a town that didn't really have the resources that he needed as a veteran and as somebody getting out of the military... He took a couple of wrong turns and it led him down a really dark path, and so that was my first kind of realization was like, 'Wow. If I hadn't been born in this area I could've just as easily ended up in a place like Maine State Prison.'"

During class, the guys write about their own experiences and their families. Some write songs. Others write poetry. Other times they just hang out and chat about their shared experiences in the military. All of it - we learned from Michael Kidd - is therapeutic.

"Mail is one of our primary communications, so with writing I recognize a lot of changes after Craig's writing program in the way that I would correspond with my mother or with my son," Kidd tells us. "I was able to talk about things in my life that I didn't even realize were an issue. Or maybe just something that was really meaningful to me that now I can share in a letter. So writing is huge here. And I think a lot of those men didn't realize it either. So when they started writing about traumatic events in their life they were able to tap into something, to find a new avenue to get over that trauma and address it in their lives."

Many of the men in Grossi's writing program are also involved in a service dog training program, working with pups that will help injured veterans all over the country.

"The dog program, Craig's writing program, anything like that is an opportunity to get over these walls and the fence and really touch the lives of anybody, whether it's our family or whether it's a veteran that receives these dogs that we will never meet," Kidd explains. "It gives us a primary opportunity for us to really feel worthy of something and feel like we still have an opportunity to be something in life, that this isn't an endgame... this is a beginning for a lot of us."

Prison isn't exactly a warm, welcoming place - and many argue it shouldn't be. But through service dog training, university classes, gardening programs in which the inmates grow vegetables for local food pantries, and writing, many are finding something they lost many years ago.

"They are finding their purpose." Liberty says. "Many of them have a post traumatic stress from their military service. We have to ask ourselves: when we ask people to go off to war for us, what duty do we have to help them transition back?"

"I think that pod and Craig's work with Fred has been tremendous in helping their recovery," says Liberty, now Commissioner of the Maine Department of Corrections.

"It really started with Fred and the fact that he wagged his tail at me all those years ago on that battlefield," Grossi admits. "That was the first lesson that he ever really taught me and he continues to teach me over the years... I call it stubborn positivity. It's the idea of finding something to be grateful for, finding something to improve on and wag your tail at, so to speak, when everything around you seems to be encouraging you to do everything else."

"Fred has literally, through sharing this story, has brought me here," Grossi explains. "Brought me to another kind of challenging environment, where people have lots of reasons to not wag their tail and to not be grateful, and he's showing me again that there's always a reason to wag your tail. And that people will do it when you give them just a little bit of a chance."

To learn more about Craig Grossi and his books, click here.