104-year-old Maine woman, living on her own, has been knitting for over a century

Dorthea Brown was born in Nova Scotia in 1915. Her mother taught her to knit when she was just four years old. 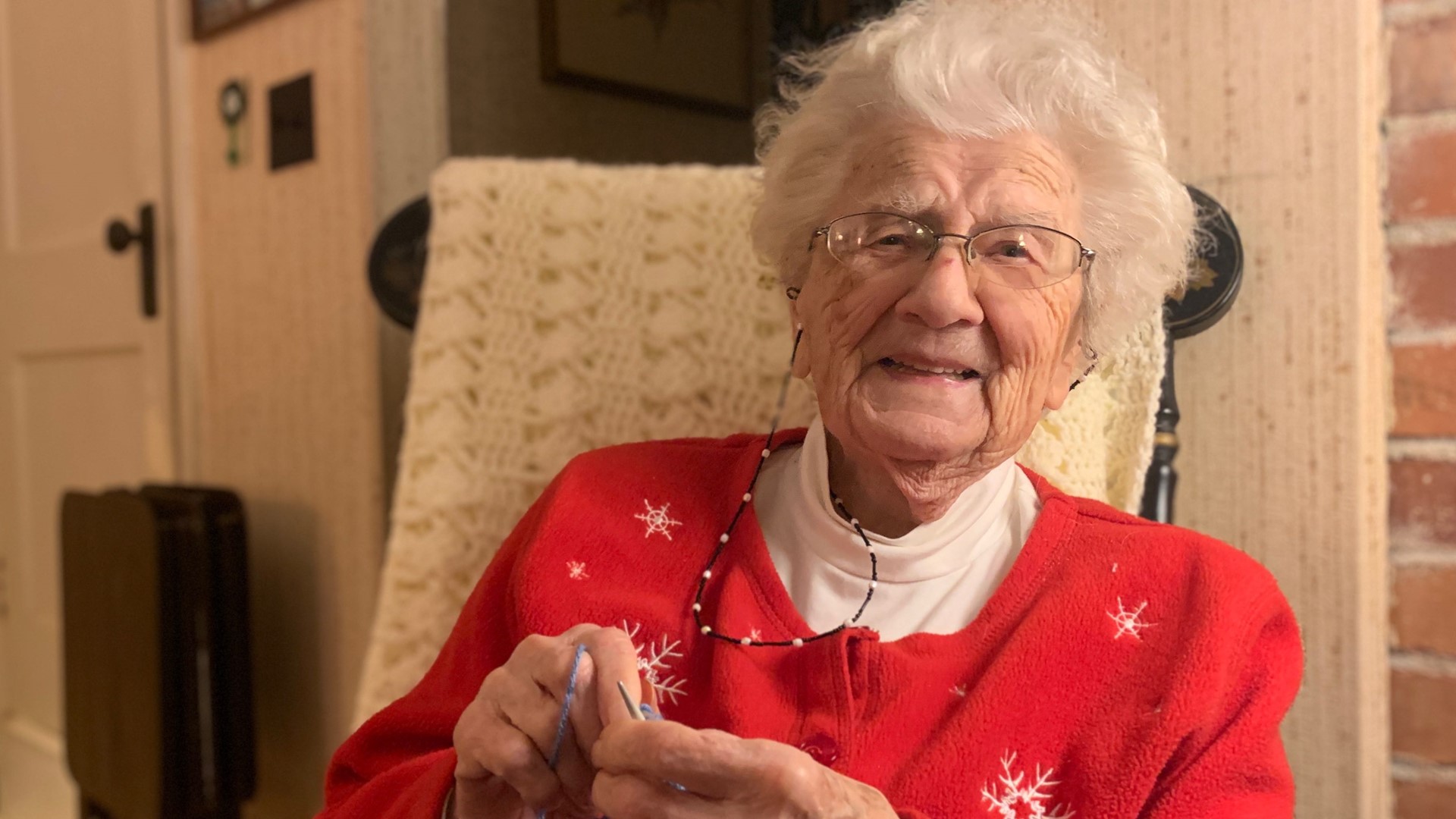 LEWISTON, Maine — Thursday nights are busy at Dorthea Brown's home in Lewiston. A half a dozen women let themselves into the 104-year-old's white farmhouse and weave their way past the kitchen and bedrooms into her back living room.

Dottie, as her friends call her, usually goes to bed early, but on Thursdays, she makes an exception to stay up late with her "girls" whom she says are worth it.

"They all have their own seats. Don't let anybody else sit there," Dottie joked as she introduced her knitting group.

Dottie was born in the small village of Upper Northfield in Nova Scotia. She lived in a grandparent's home, lit with kerosene lamps, with her parents and her father's brothers. Dottie was an only child who says her only friend was a lamb her father gave her the responsibility of caring for it when she was just five years old. 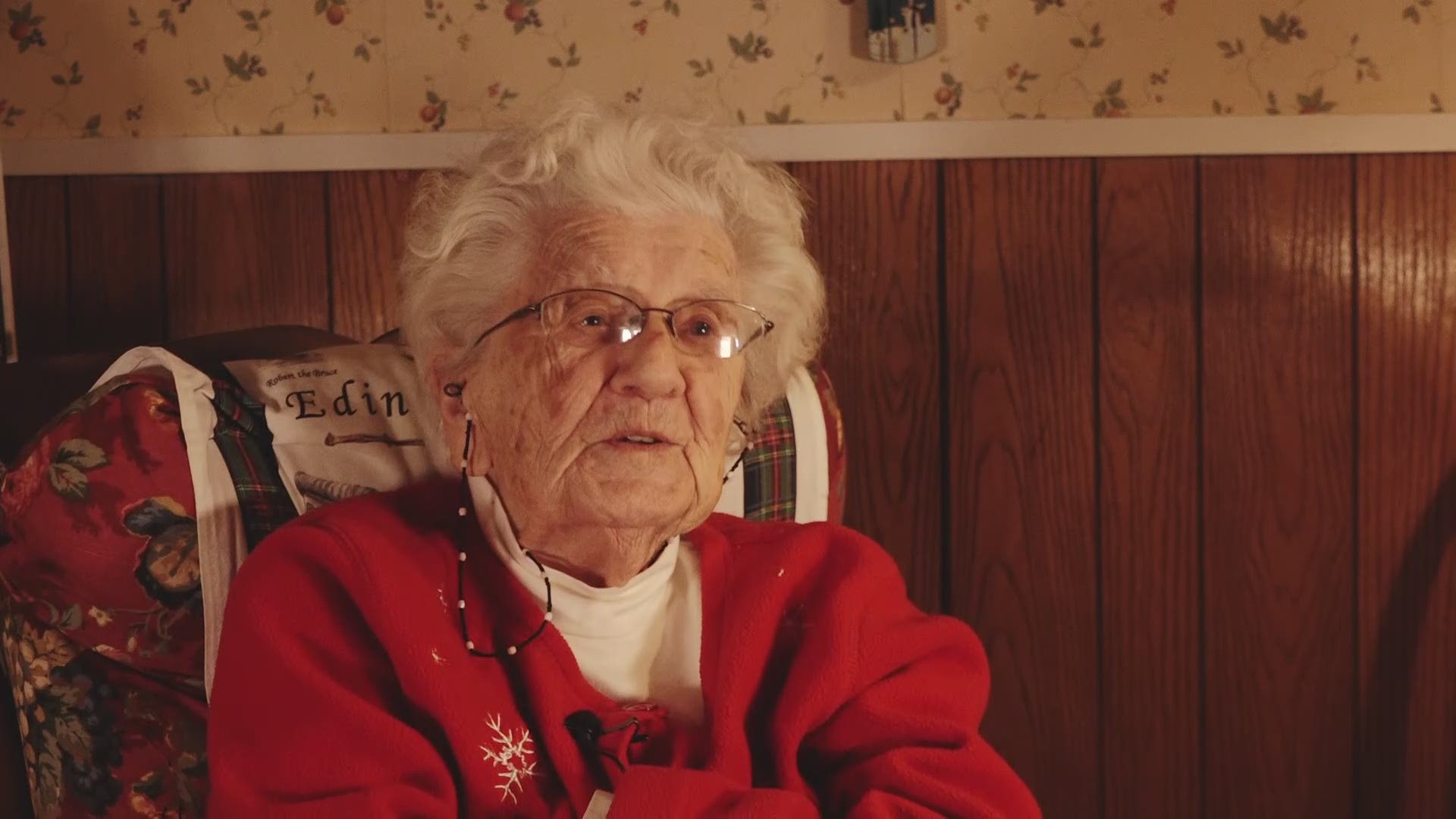 Dottie's grandfather was a cobbler and would make her shoes. Unfortunately, they were "hideous." Dottie would walk down the lane in her ugly shoes and slip them off when her house was out of view. She preferred going to school in her bare feet rather than wearing her "horrible" shoes. Her grandfather found her out and she was sent to the woodshed which is why, with a giggle, she advises parents, "spare the rod, spoil the child."

In 1935, Dottie married Mainer George Brown to whom she'd been introduced by her parents.

"He was a hick. Oh, a hillbilly hick. He was! But he got better," Dottie said through laughter. The couple had two sons and stayed married for one month shy of 60 years when George passed away. George had wanted to move to the Lewiston home were Dottie still lives but she initially refused because there was no toilet, only a privy.

"I said to my husband, 'I will not go up there until there is a bathroom.' And he said, 'There is no place to put one.' I said, 'You find one or go by yourself.' He found one."

Dottie has been living for the last two decades on her own in her Lewiston home -- with a bathroom -- in large part because of the help and support from her family, neighbors and the women of Sit and Knit.

Her fellow knitters pick her up for church, take her trash to their home so she doesn't have to bring a trash can to the curb, and they call her "all the time." Dottie says her neighbors and other friends take her grocery shopping, help her balance her checkbook, and help her out around the house.

The only complaint that the knitters have of Dottie is that she can be stubborn. Recently she got stuck in her sink when the 4 foot, 11-inch tall great-great-grandmother climbed a step ladder to clean her curtains and couldn't find the step when she was coming back down.

"I was in there for quite a while," Dottie said matter-of-factly.

Credit: Dottie Brown
Dottie Brown knitting in 1919 in Nova Scotia when she was 4-years-old

Among the laughter and busy fingers at Sit and Knit, one might never know the group was organized with a set of rules.

"There will be no gossip, we won’t talk church, and we will have prayer at the table when we have our refreshment, and if they want to come under those conditions, fine. And it's worked out beautifully," Dottie explained.

And the women don't just knit together. When Dottie was 100 years old, a few of them snowshoed across Porter Lake in New Vineyard. Every year Dottie is in the Moxie Parade in Lewiston. She used to ride a tandem bike with her pastor, but for the last two years, she has given up the bike riding.

"I have a lovely bike in the barn, but I have been declared beheaded if I take it out," Dottie said and cast the blame on her son for taking her bike away.

Some of the women in Sit and Knit drive an hour to spend time in Dottie's warm living room every week, but they say she is worth it.

"She’s just truly an amazing person," said fellow knitter Sandy Wood. "I just pray that she has many more years to enjoy."

Between her family, friends, and laughter Dottie Brown has knit together quite life in her 104 years.

RELATED: Bath woman transforming the after-school scene as she works to let teens know they matter