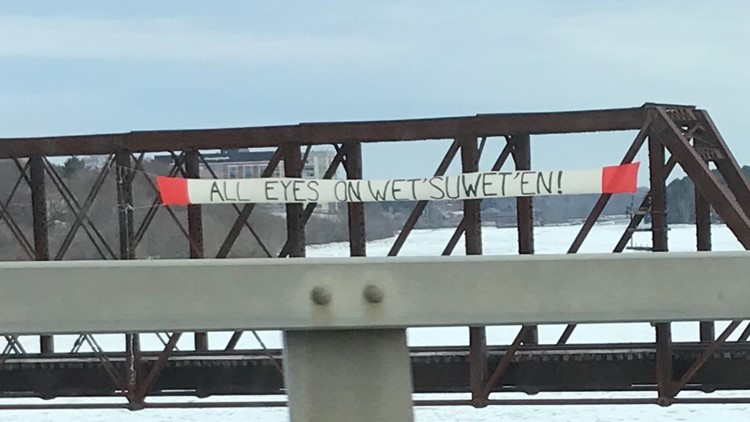 Photo by: NCM
A very large banner has been tied on to the top of the railroad trestle that reads, “ALL EYES ON WET’SUWET’EN”

Large banner on trestle between Bangor and Brewer raises questions

BREWER, Maine — If you crossed the Penobscot Bridge on Wednesday you may have noticed something different. A very large banner has been tied to the top of the adjacent railroad trestle that reads, “ALL EYES ON WET’SUWET’EN”

The Associated Press reported on Feb. 19 that WET’SUWET’EN is an indigenous group that has been demonstrating by setting up blockades in British Columbia, Ontario, Alberta and Quebec in solidarity with opponents of the Coastal GasLink pipeline project, which crosses the group's traditional territory.

View from the Penobscot bridge of a very large banner tied on to the top of the adjacent railroad trestle.
NCM

Both Bangor and Brewer Police Departments say the trestle is the property of Pan Am Railways and they will have jurisdiction of any investigation.

Pan Am Railways Executive Vice President Cynthia Scarano confirmed to NEWS CENTER Maine that whoever placed the banner on the trestle was trespassing.

"Being on railroad property is obviously dangerous for the trespasser but it is also very dangerous for train crews and the communities in which we operate," Scarano said.

RELATED: Can wearing a face mask protect you from the new coronavirus (COVID-19)?

RELATED: Medical marijuana is third in revenue in Maine