Maddy Smith’s family fought the state for access to the world’s most expensive drug – hoping to cure her Spinal Muscular Atrophy. 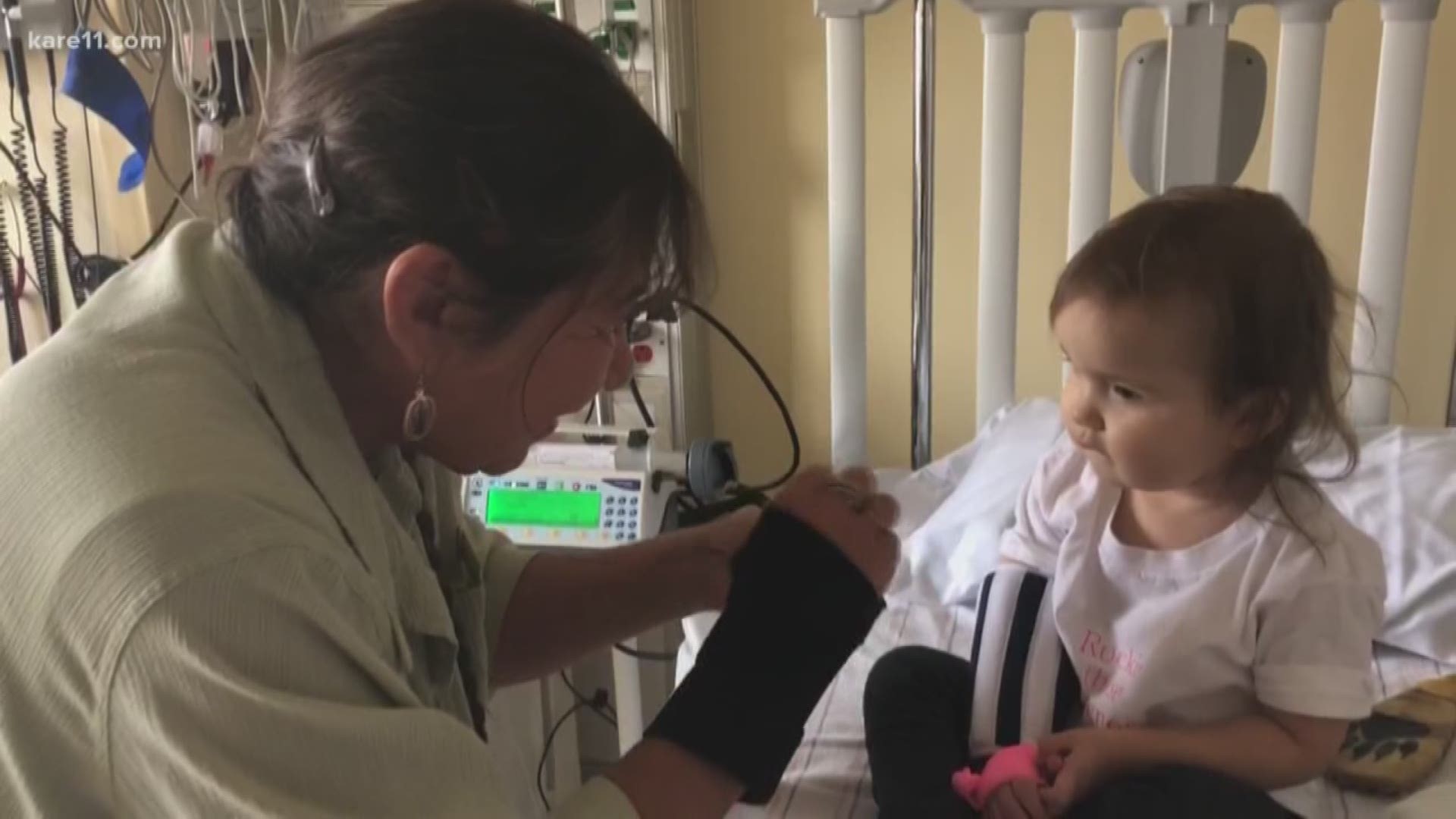 BLAINE, Minn. — Maddy Smith woke up to hope Thursday morning.  It was the day her family had been waiting for and fighting for – the day the toddler would receive an infusion of a gene therapy drug that could cure her.

Maddy has Spinal Muscular Atrophy, known as SMA, a potentially deadly genetic disorder that, if untreated, prevents babies from swallowing, breathing independently and even from holding their head up.

Even after treatment with different drugs, Maddy is unable to walk, talk or eat solid foods.

A new gene therapy treatment called Zolgensma is a potential cure – but at $2 million it is controversial because it grabbed headlines as the most expensive drug in the world.

“It’s such a big day but I don’t feel scared.  I’m excited,” said Angie Bruce, Maddy’s mom, as she fed Maddy a bottle Thursday morning.  The family invited KARE 11 to join them as they prepared to go to the hospital.

KARE 11 first introduced viewers to Maddy just three weeks before her second birthday, the age at which she would be too old to receive the drug.

Maddy is insured through the State of Minnesota Medical Assistance program, administered by the Department of Human Services.  Initially, the state denied their claim, refusing to pay for Maddy’s Zolgensma.

Her mom and her doctors fought with the state to reverse the ruling. Four times, DHS declined to cover the drug. Finally, just days after KARE 11 reported Maddy’s story, they reversed the decision.

The one-time therapy is designed to treat the root cause of SMA by delivering a fully functional copy of the gene that is missing or malfunctioning in Maddy’s body.

Even with its sky-high price tag, in the long run Zolgensma could be less expensive than years of injections of the other drug Maddy was receiving.

Maddy’s grandmother Sandy Davidson was overcome with emotion as she thought about the journey.

“I know it’s expensive, but you know she’s worth every penny and more. Every child is,” Davidson said.

“We’re about to see what $2 million looks like,” Angie said.

They drove from their home in Blaine to the University of Minnesota Masonic Children’s Hospital, walking through the doors to treatment and hopefully to a different life, one in which Maddy could walk, talk and eat on her own.

“I’m just waiting for her to take off running with her brother. She’ll be the one chasing after him,” Angie said.

The family sent pictures of Maddy hooked up to the IV that would deliver the gene.  The process looks simple – taking just over an hour.  But Maddy’s doctor assured us it’s not.

Dr. Peter Karachunski of the Pediatric Specialty Care and Discovery Clinic at the U of M says it is “absolutely groundbreaking and incredible for us as providers and for families.”

He used to have to tell parents of kids with SMA there was little hope.  Thanks to the new treatment, that has changed.

“Now we can offer life-saving treatment and essentially a cure for this horrible disease,” Karachunski said.

Maddy is the first child in Minnesota to receive this gene therapy since it was approved by the FDA this spring.  But Dr. Karachunski says he’s worked on trials and the results come surprisingly quickly.

In videos from inside the hospital, Maddy can be seen sitting attached to the IV delivering the treatment as her grandmother sings to her.  She is calm, used to hospitals.  Her family is cautiously elated.

Hours later, they leave tired, grateful and eager for the milestones ahead.