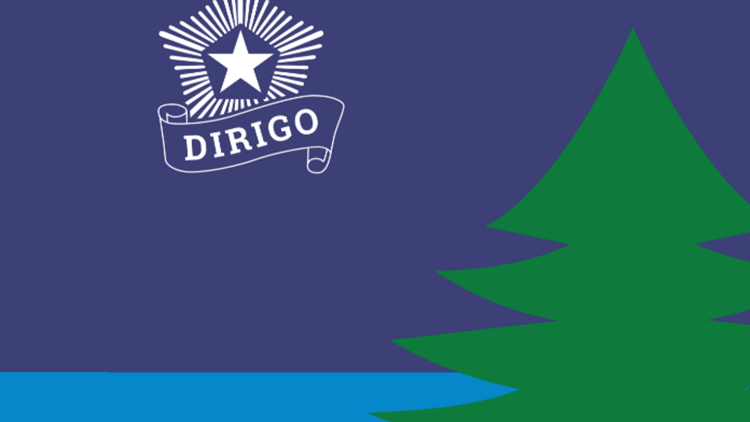 Photo by: Maine Dept. of the Secretary of State
The favorite choice in a three-way poll to select Maine's bicentennial flag was the design that closely resembles the original state flag from 1901.

AUGUSTA, Maine — For its second century as a state, Maine is getting a second flag.

Maine Secretary of State Matt Dunlap on Friday fulfilled a directive from the Maine Legislature to present a design for a flag to celebrate Maine's bicentennial of statehood.

The final design, submitted by Jeff Van West of Portland, was the favorite choice among 59% of voters in a three-way poll on the Secretary of State's website.

The Maine Secretary of State's Office is asking Mainers to vote for their favorite of three designs for the state bicentennial flag.
NEWS CENTER Maine

RELATED: Here's a question about Maine's bicentennial for you to run up the flagpole

Van West's design is similar to Maine's original state flag from 1901. The background is split into two shades of blue representing the sky and water. A pine tree is featured on the right side. To the left is the North Star above a banner with the state motto, Dirigo.

Maine became a state on March 15, 1820. A year-long observance of the bicentennial will run through 2020. The bicentennial flag is meant to serve as a unifying symbol for the celebration.

Before the flag is officially adopted, it must receive approval from the State and Local Government Committee, as well as Maine's Bicentennial Commission.