But Jefferson may have had a more direct involvement with Maine’s constitution, and may actually have written part of it, according to Herb Adams. 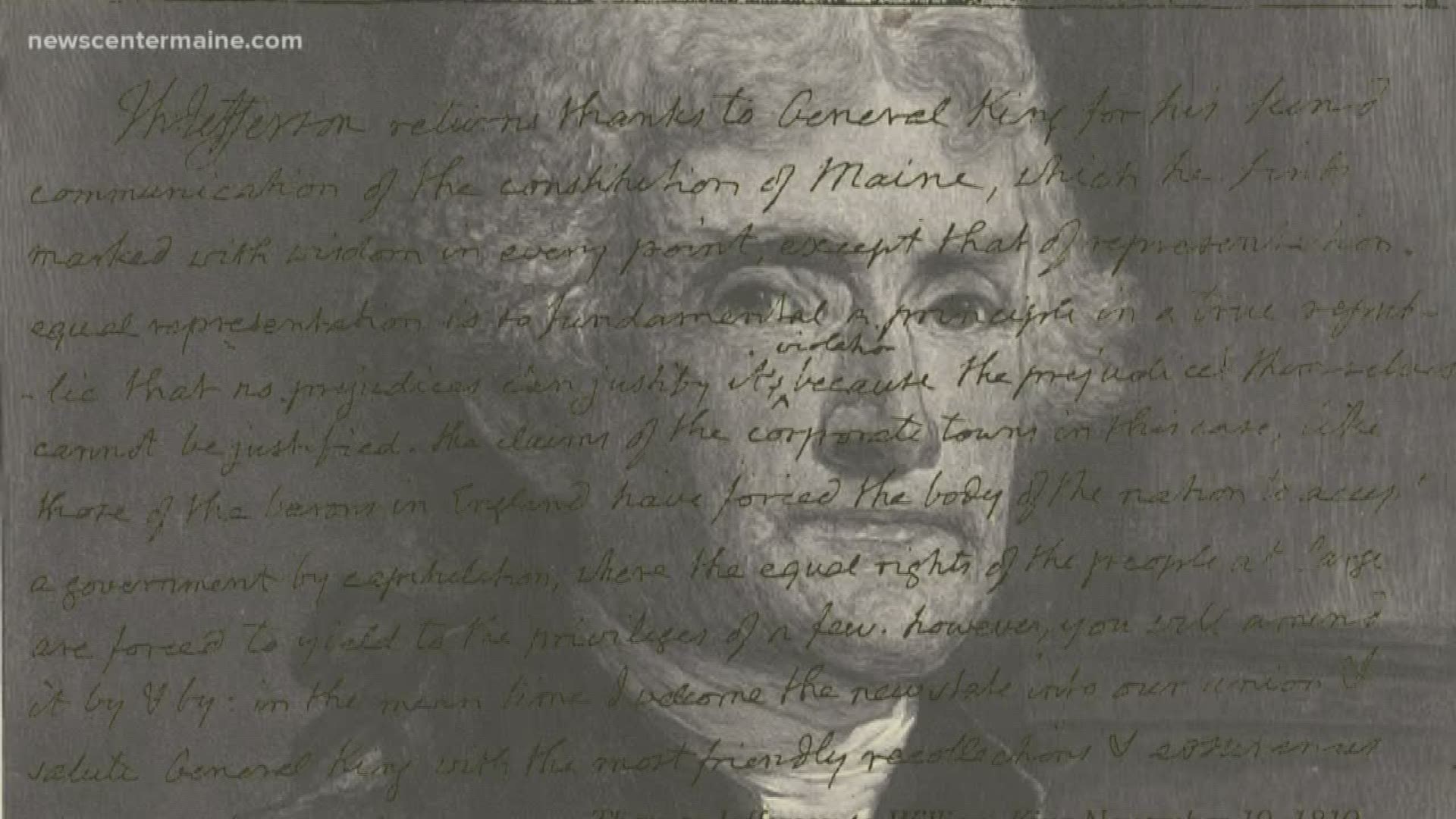 PORTLAND, Maine — Next week will mark a milestone in Maine’s history, as the state approaches the 2020 bicentennial celebration. December 6 will be the 200th anniversary of the statewide vote that approves the new Maine constitution. At the time of that vote, most Mainers likely didn’t know there was criticism of it from one of America’s founding fathers—who may have also written part of the document.

The letter from Thomas Jefferson to William King, dated Nov. 19, 1819, is still in the archives at the Maine Historical Society. King was the leader of the statehood movement and the chair of the constitutional convention, which had created the document the previous month. According to Portland historian Herb Adams, King had met and visited Jefferson previously, and sent him a copy of the constitution for review and comment.

“Thomas Jefferson, of course, was one whose opinion he valued, and he sent the constitution to President Jefferson for his opinion at the same time it had been sent to the people of Maine,” said Adams.

“Thomas Jefferson Returns thanks to General King for his kind communication of the constitution of Maine, which he finds marked with wisdom in every point, except that of representation.

Equal representation is so fundamental a principle in a true republic that no prejudices can justify its violation because the prejudices themselves cannot be justified. The claims of the corporate towns in this case, like those of the barons in England have forced the body of the nation to accept a government by capitulation, where the equal rights of the people at large are forced to yield to the privileges of a few.

However, you will amend it by & by:   in the meantime, I welcome the new state into our union & salute General King with the most friendly recollections and assurances of esteem & respect, Monticello - Nov. 19. 19 “

Adams says the concern Jefferson stated about representation concerned part of the constitution that allowed Portland and Wells, the two largest cities or towns in the state, to have multiple representatives to the Legislature, elected at large, instead of one per town, as Jefferson appeared to favor.

And Jefferson wrote back, praising the document and its ideas…except for one thing.

except that of representation. Equal representation is so fundamental to a true republic that no prejudice can justify its violation

The issue, says Adams, was about the number of representatives to the Legislature from the two largest incorporated towns or cities…Portland and Wells. They were allotted multiple representatives instead of one.

“Jefferson didn’t like it because he felt it represented the influence of big things over little things. Jefferson said ‘Great cities are great sores’, and he looked on any place of 8,500 people (Portland at that time) as a big city.”

But the letter also shows Jefferson believing the new constitution would eventually be amended “by and by”, and it was. After a U.S. Supreme Court ruling in the early 1960s, known and “one person one vote,” the law was changed to require individual electoral districts.

But Jefferson may have had a more direct involvement with Maine’s constitution, and may actually have written part of it. Herb Adams said a section of language in the document about education is generally believed to have been written by Jefferson himself, at the request of William King.

“It’s a piece Jefferson called Literature, we would call education,” says Adams. (It is) basically saying it is the responsibility of the state to make sure the towns pay for education…

and that is in the Maine constitution to this day.”

He says Thomas Jefferson was always said by William king to be the author of that piece.

“We never found the piece of paper (to prove it) but it may eventually show up.”

Voters overwhelmingly supported the new Maine constitution in December of 1819 Adams says they likely never knew about the role played by such a famous American.