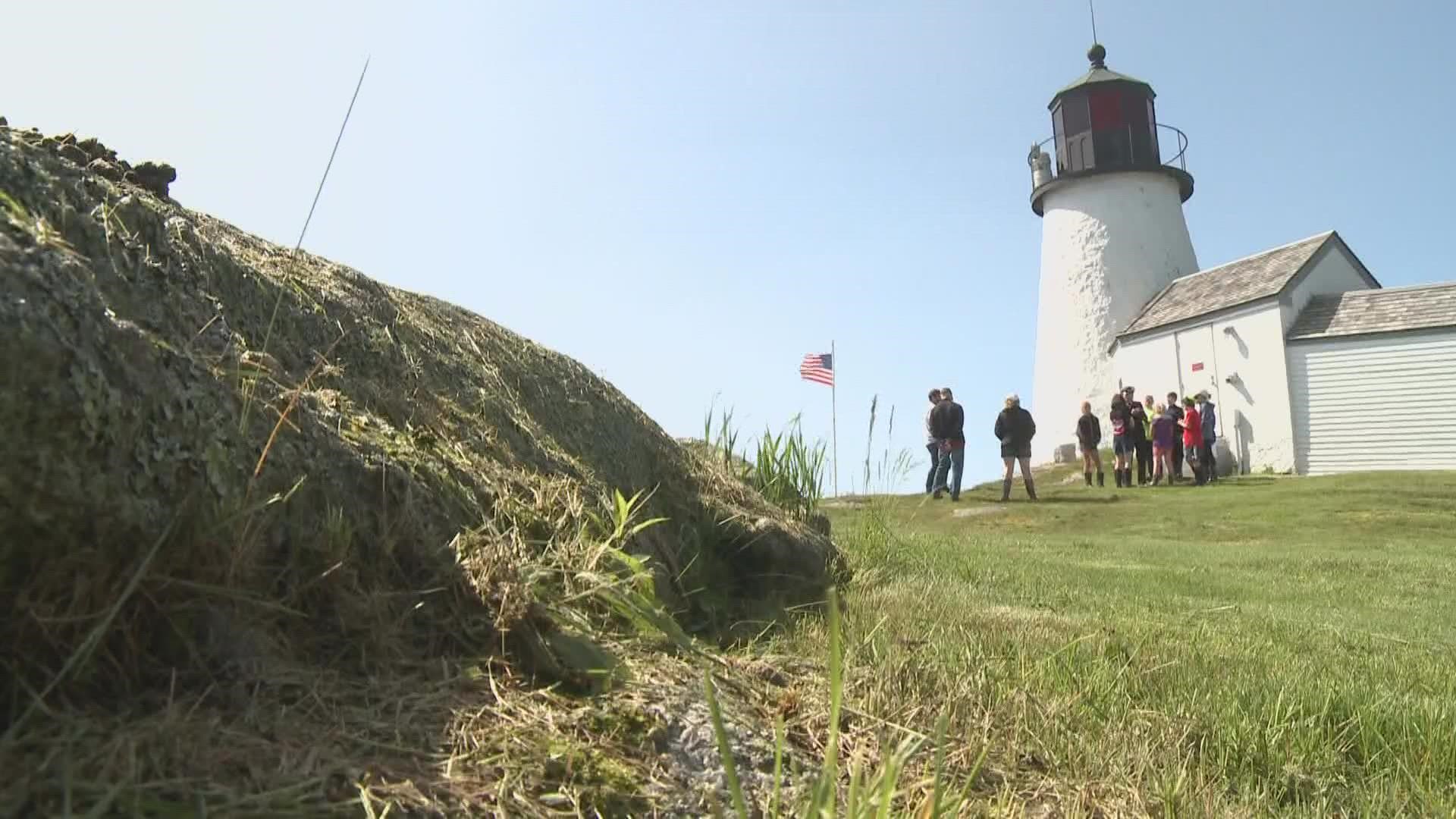 BOOTHBAY HARBOR, Maine — Elaine Jones carefully, and briefly, removed the red cloth, revealing a bronze plaque attached to the wall of the Burnt Island lighthouse. It celebrates the bicentennial of the lighthouse tower, and the distinction it now holds. There were other Maine lighthouses built before this one, but Burnt Island has outlasted them all.

“This is the oldest original lighthouse in Maine. The tower has never been rebuilt, never changed, stayed the same as it was in 1821,” said Jones, proudly looking at the tower, built from granite dug out off the island.

Jones is the unofficial lightkeeper of Burnt Island, a job she inherited when the Maine Department of Marine Resources took ownership of the island 23 years ago. Since then, a part of her job for DMR, Jones has led the renovation of the buildings, the creation of a museum and overall sprucing up of the island, located a mile or so offshore from Boothbay Harbor.

Jones has clearly loved curating the island’s history as well as making it a popular place for visitors.

“It went on the National Register (of Historic Places) in 1977, so right there we know it's something you need to protect,” Jones said, then smiled.

“I’m very proud to leave this lighthouse in much better shape than when I received it for the State of Maine.”

Many people appreciate Jones’ work, as well as the help from a large volunteer force she has assembled over the years. Which helps take care of the island. Governor Mills, artist Jamie Wyeth and the Coast Guard Region admiral all travelled to the island Thursday for the bicentennial ceremony.

More significantly, perhaps, they were joined by several former lightkeepers and their families who served on Burnt Island for the Coast Guard, and cared for and operated the light during their normally three-year tour of duty.

“She has worked miracles,” said Henry Sieg, of the work by Jones.

Sieg was the last lightkeeper before the Coast Guard automated the light in 1988. Even though in his years the Burnt Island light ran on electricity instead of kerosene, he said there was still plenty to worry about.

“You had moments of, not quite panic, wondering if the generator would be needed. The light would go out and you’d say ‘Oh my God, the light’s out.' Then you panic.”

Sieg told of his son and daughter both being born during his family’s time on the island, and how he would put his wife in a boat when she began labor, hoping to get her to the mainland hospital in time.

Steve McCullough said he was the son of a keeper, stationed on the island from 1959 to 1961—before electricity—when there was a lot of physical work for the whole family. The bell tower with the fog bell was operated by a system of weights that rang the bell.

“It was work,” said McCullough, “We didn’t have any electricity and a bell that had to be cranked every four hours, a 450-pound weight.”

He said he and his sister would work together to wind up the weight whenever the fog rolled in.

Those memories and more are enshrined in the museum on Burnt Island, along with the interior of the keeper’s house, carefully restored to the way it looked in the 1950’s, with a large black kerosene cookstove front and center in the spotless kitchen.

It was a tough life at times for all of them, though McCullough recalls the fun parts, too.

“This was a Coast Guard station, but my dad got away with quite a lot, “ he laughed.

The activity on the island nowadays, at least in summer, is people. The island has become a popular spot for visitors to walk around, admire the flower gardens, the ocean views and, of course, visit the light tower and keeper’s house. A place now that celebrates both beauty and history, and the lives of all those who lived there.

More information can be found here.

(NOTE: Burnt Island can only be reached by water. Visitors can come by their own boats or kayaks. There is also a lighthouse tour boat, operated by Balmy Days Cruises in Boothbay Harbor)