Research for the first time is confirming deer ticks that carry Lyme disease are extending their range. But many parents aren't aware their kids are at risk now. 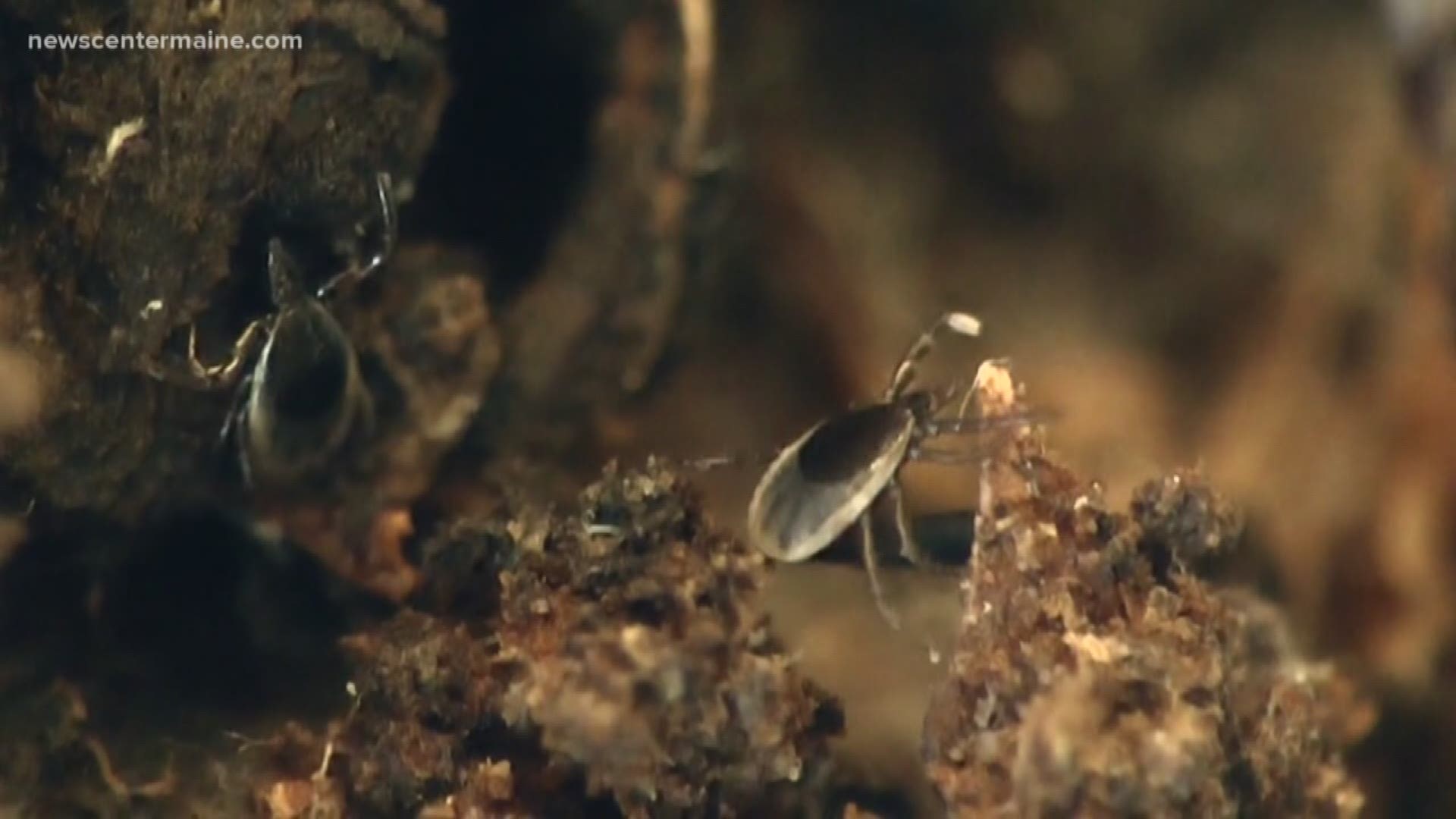 ORONO, Maine — New data from researchers at the University of Maine is confirming what scientists have feared all along -- that ticks are surviving extremely harsh conditions in Aroostook County.

This county is the only remaining county in the state where deer ticks that carry Lyme disease haven't been spotted yet.

Michelle Volk, a UMaine graduate student, is tracking tick migration in northern and Downeast Maine. She placed tick nymphs -- which look like moving poppy seeds -- in bottles as "tick traps." The traps were buried in the ground from fall to April.

They were monitored in different types of conditions. Some bottles were places under leaves; others were exposed. More than 90% of the ticks insulated survived at locations near Millinocket and Presque Isle. In Presque Isle, the ticks were buried under more than 140 inches of snow.

Only 3% of the ticks without any insulation in the traps survived.

Volk hopes to use the data in a tick tracking map to let the public know where deer ticks are located throughout the state, especially in areas that are still reporting very small cases of Lyme disease.

"We really have no definite idea where they are surviving in northern and western Maine. This data is key to give us new insight as to how they are able to migrate and where they are heading," Volk said.

Aroostook County had four cases of Lyme disease in 2018, and Piscataquis had three cases, according to the Maine CDC. Cumberland County had the highest number of cases with 286.

The agency says there were more than 1,400 confirmed and probable cases of Lyme disease last year. This summer, Volk plans to test ticks in areas throughout the state and near areas where the traps were located for bacteria that causes Lyme and other tick borne diseases, Borrelia, Babesia and Anaplasma.

Sarah Brooks grew up going to her family's camp in Charleston -- about 30 miles northwest of Bangor. Now she takes her 6-year-old son Jordan, who loves the outdoors.

After a recent visit, she got a call from her son's teacher. Jordan's ear was red, and he said it hurt. Initially, his teacher thought it was a bug bite.

"I went to wipe it off, and I didn't expect it to wave back at me," said Brooks.

Jordan's teacher managed to pull out most of the deer tick -- but the head was embedded in his ear. Jordan received antibiotics to kill the bacteria that causes Lyme disease. But for Sarah -- who hadn't done a tick check on herself or her son -- it was a serious wake-up call.

"I wasn't as vigilant because I thought the ticks were dying over the winter."

Game Warden Joe Lefebvre patrols Knox and Lincoln Counties. But he never goes into the woods without protective clothing.

A camo-suit he wears is pre-treated with permetherin. The pesticide is able to incapacitate ticks or cause them to fall off the fabric.

Over the years, he has watched more deer ticks advance from the coast and southern Maine.

"More and more are progressing north about five miles every year -- I would find them in my armpits, on my back sometimes. I would bring 20 of these home a day," said Lefebvre.

Lefebvre was treated with antibiotics shortly after experiencing pain and a rash from a tick bite. But he ended up being diagnosed with chronic Lyme two years later.

Lefebvre is still receiving treatment, which he says saved his life, but he suffers from effects of Lyme disease. He loves his job but his health depends on taking precautions. The Maine Warden Service provides gear treated with permetherin to all game wardens and prompts medical attention after reporting a tick bite.

In the meantime, Jordan has not experienced any medical problems related to the tick bite. She and her family now wear protective clothing and do tick checks. She say Volk's research will be valuable.

"It's definitely scary, and I don't want my 6-year-old to have to deal with a lifetime of dealing with the side effects of Lyme disease. If we had a map, we could follow where the ticks are migrating, where there is a large outbreak -- that would be very helpful because we go camping and four wheeling."

According to Chuck Lubelczyk, a field biologist with the Maine Medical Center Research Institute, there are several different repellents that are effective. That includes permetherin, which can be sprayed on boots and clothing.

Permetherin lasts about six different wash cycles. If it is sprayed on clothing that gets wet often, users should respray every few days.