Researchers are combing sections of the woods trying to find out how far ticks have migrated into northern Maine. 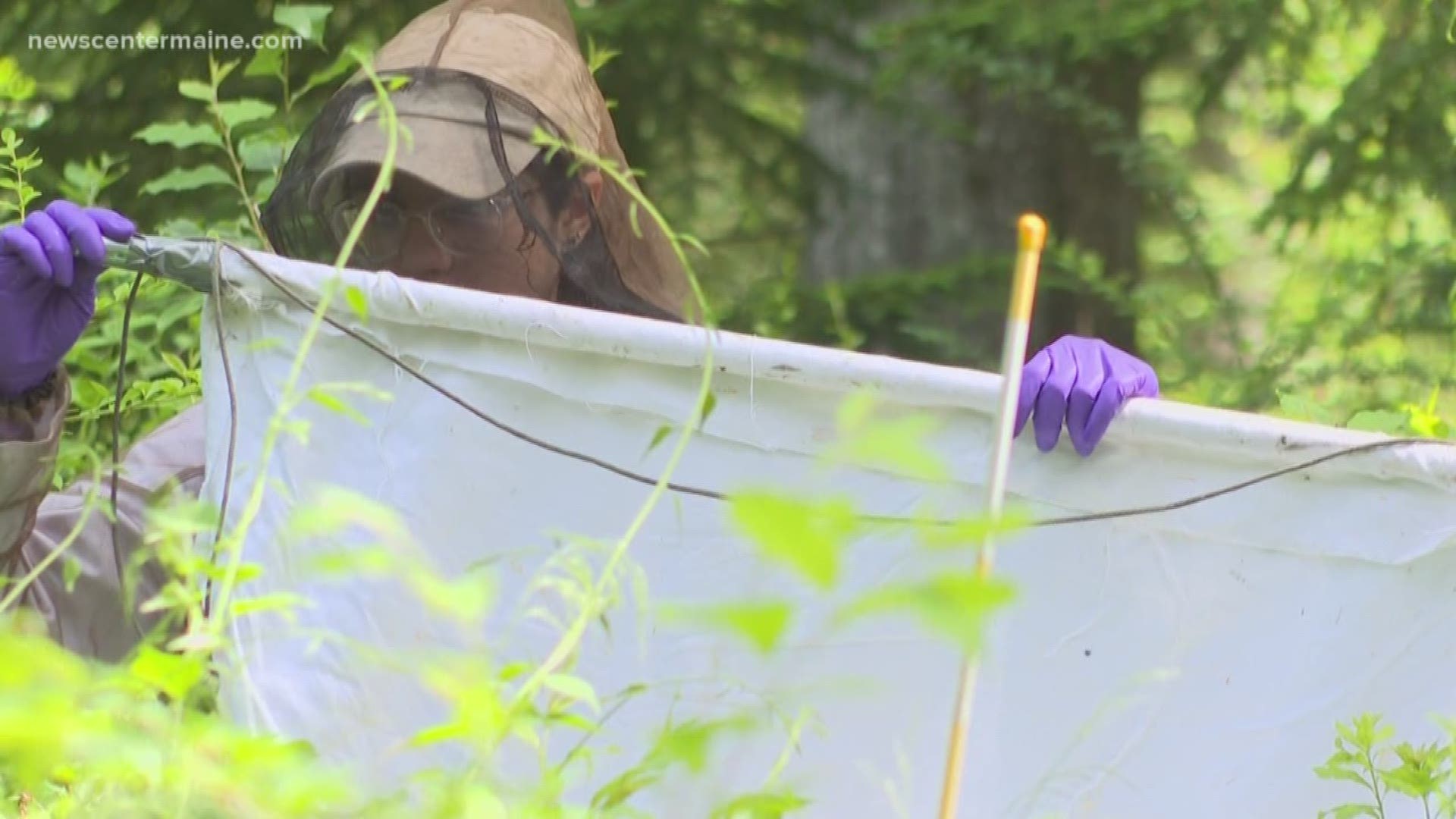 MILLINOCKET, Maine — Summer is a time Mainers look forward to all year. But for a lot of people -- concerns about Lyme disease is taking a big bite out the fun of being outdoors.

Deer ticks that carry Lyme are very active this summer due to wet and cooler temperatures, which they love. Experts say ticks are expected to crawl further north this summer – meaning cases of the disease will likely surge.

Graduate students from the University of Maine are trying to pinpoint where the ticks are and what diseases they carry. So far, their research discovered that ticks can live under snowbanks near Millinocket and far northern Maine -- now researchers are combing those sites to see if ticks are emerging in those locations.

Just 12 miles outside of Millinocket on a gorgeous summer day, Richard LeVasseur and his friends are heading out onto the water and they aren't wearing a lick of repellent.

"I have never seen a deer tick and I have never heard anyone in this area having Lyme disease," they said.

LeVasseur owns a lodge which draws tourists from all over the country, compared to central and southern Maine --  he says the majority of his visitors have few concerns about being exposed to ticks that carry Lyme.

RELATED: Tick-borne diseases can be deadly for pets
RELATED: Some parents rely on tick checks, not DEET to keep kids safe

About a mile away -- deep in the woods in Seboeis Public Lands, a team of students from the University of Maine are on a mission.

"We are trying to find out where ticks end in Maine -- the line as you will," said Michelle Volk.

Wearing white jumpsuits and protective headgear, Volk and Brianna Guy are hunting for ticks. They drag what looks like white flags across the leaves on the ground. Ticks looking for a animal to feed off of -- will often latch on. Volk is collecting data from five different site across the state. The data help create a tick tracking map to let the public know where deer ticks are located in Maine, especially in areas that still reporting very few cases of Lyme disease.

"It would definitely be good to be able to warn people that there is risk of tick-borne diseases, especially in places where we have been and we know we have ticks so far," they said.

Researchers are dragging near tick traps they placed here last fall -- the majority of ticks were placed in leaf litter inside the traps survived, despite being buried under nearly 3 feet of snow.

Several hours of dragging -- several sections in the woods results in the discovery of one nymph, the last stage before a tick becomes an adult. Researchers aren't necessarily surprised.

"We know they can survive the winter. That doesn't mean there aren't other environmental factors that are preventing them from being here. We'll have to wait and see what happens," Volk said.

We catch up with the students later in Cape Elizabeth.

Researcher are finding ticks in what's known to be a very active tick area -- especially following a wet spring and cool summer -- which ticks love.

Ticks from this site will serve as a control group giving researchers additional data to compare with other locations -- which include Presque Isle, Orono, Seboeis and Cutler. As far as that line where ticks haven't crossed yet -- ?

"It may be very well south of Seboeis, it may be around Seboeis. We are getting a pretty good abundance in the Bangor-Orono area," Volk said.

In July, researchers will be collecting ticks from field mice to see what diseases they carry. Besides the bacteria that causes Lyme, they are testing for anaplasmosis and babesia – two other tick-borne illnesses. Volk also hopes to use the data and post information about tick activity and diseases they carry on signs at all state parks throughout Maine by late next year.