A Portland nursing home has incorporated an incredible program in the Netherlands that places nursing students within senior citizen facilities. 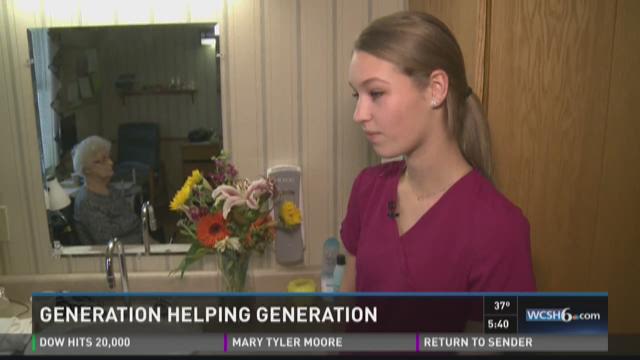 It’s based on an incredible program in the Netherlands that I first learned about on Facebook. Nursing students live alongside residents in nursing homes. The video that was posted showed the close connection students forge with residents.

I shared the video on Facebook asking “why can't we have something like this here?” One of my Facebook friends said, “We do, and it's right here in Maine at Saint Joseph’s Rehabilitation and Residence in Portland.”

“Hey there, I have some lunch for you,” Nursing student Jahnique announces as she walks into resident Pat Flagg’s room. The Saint Joseph’s College sophomore is taking part in the Intergenerational Living Project at Saint Joseph's Rehabilitation and Residence…

The program is a first of its kind program in the area. Six students from Saint Joseph's College, USM, and SMCC working at the nursing home also live there, free of charge. “It's good for them, it's good for us, it's good for our residents, it's good for the field so we're really, really excited about it,” Administrator Peggy Farrington said. Farrington explained she modeled the intergenerational living program after the same one in the Netherlands I posted on my Facebook page. “Our goal is that it's at least two semesters per student. We want them to really be here for that amount of time to get the experience and to get the training."

The program requires each student to work a minimum 16 hours a week as a CNA or Neighborhood Assistant at $11 to $12 an hour. As for the housing? Arguably nicer than many dorms.

Brooke shows us her room. It’s spacious enough to fit a double bed, desk, bookshelves, television and her own private bathroom.

“When I tell people ‘yeah I live in a nursing home’ they're like, ‘wait, what? Say that again!’".

Brooke is a junior at Saint Joseph's College. She takes biology classes on the Standish campus, but her dorm room is inside the nursing home near the “B” wing, just down the hall from patient Barbara Fetteroll.

"Do you like it when people come in and sing and have music? Oh yes." Barbara Fetteroll has lived at the nursing home for the past two years when the symptoms from a stroke and additional medical issues became too difficult for her to be cared for at home. Her husband Gene visits daily. The two have been married for 59 years and he brings humorous stories with him on his visits. He shares the prank Barbara, then a nursing student, pulled on him when the two began dating in the Philadelphia area. “They set up the chair for me with the whoopee cushion …see Barbara, see the look, and I sat on it and you know the rest.” I ask him, “So she had you at whoopee cushion?” Gene smiles broadly, nodding his head and says, “Yes, a whoopee cushion!” The two break out in a laughter so intimate, it’s easy to understand that humor has likely been the glue in their marriage.

Although the Portland-based program only started a couple of weeks ago, Gene and Barbara are already big fans.

Gene says of the nursing students, “They could be like our grandchildren, because we have grandchildren who are 18 to 25.and that's good because they bring in new ideas and new values and they might mention something that's on tv that we've never heard of it and that's fine, we're okay with that!"

USM Freshman Maddie hears the comparison to family and agrees. "Yeah, I do feel that way. I know it's very nice for them to have someone to talk to and sometimes they go into the room just to talk even if they don't need anything."

Maddie has already forged a close relationship with the Fetterolls. “It's just cool for someone to let you into their life and share and explain the stories that they've had."

Jon Dahms, who runs HR at Saint Joseph’s Rehab and Residence agrees. "It's a great experience that these students wouldn't be able to find elsewhere." Dahms coordinates the program with local nursing schools. He says this out of the box approach gives students critical real world experience. “We want these students to get so much more out of this than just coming to work each day and learning from someone who has experience. We want them to really interact with our patients, we want them to be out there and to be hands on, to really learn as they go."

The program, a twist on the traditional nursing home paradigm, is poised to serve a dual purpose: students provide comfort and assistance 24/7 to the patients, and the patients teach the students valuable lessons. Resident Pat Flagg explains, “People are human; they have a day when they're not very good and I hope they learn to live with that and look beyond it to see the person who is maybe unhappy or hurting and finding that out and relate to that problem."

Jahnique, Brooke and Maddie all say their first goal is to meet and get to know the residents. They say they aren’t worried about meeting the minimum 16-hour work requirement; living at the nursing home means they can be available to the residents at night, on the weekends, whenever the nursing staff needs them in a pinch. And, as they are quickly learning, they are also available to just hang out with the residents: play games, read, watch tv.

"I love it, they're just friends, they're still friends, they're just older friends, with different new stories that you can learn," Brooke shared. The free room and board, she says, is just the icing on the cake. An education like this? She’s not taking it for granted. “This was such a once in a lifetime opportunity that I feel like I'd be missing out if I didn't do it."

Peggy Farrington says she is taking a lot of notes and is willing to share them with any nursing homes or assisted living facilities that are interested in starting a program like their intergenerational living project. “The more successful we are, the better it can be for everyone,” Farrington shared, before a smile spread across her face. “I love my job. I just love it!”