The cost of duty: PTSD strikes soldiers in combat and first responders at home

Randy Liberty, who served 26 years in Maine law enforcement and 21 years in the infantry, says treatment at Togus VA saved his life. 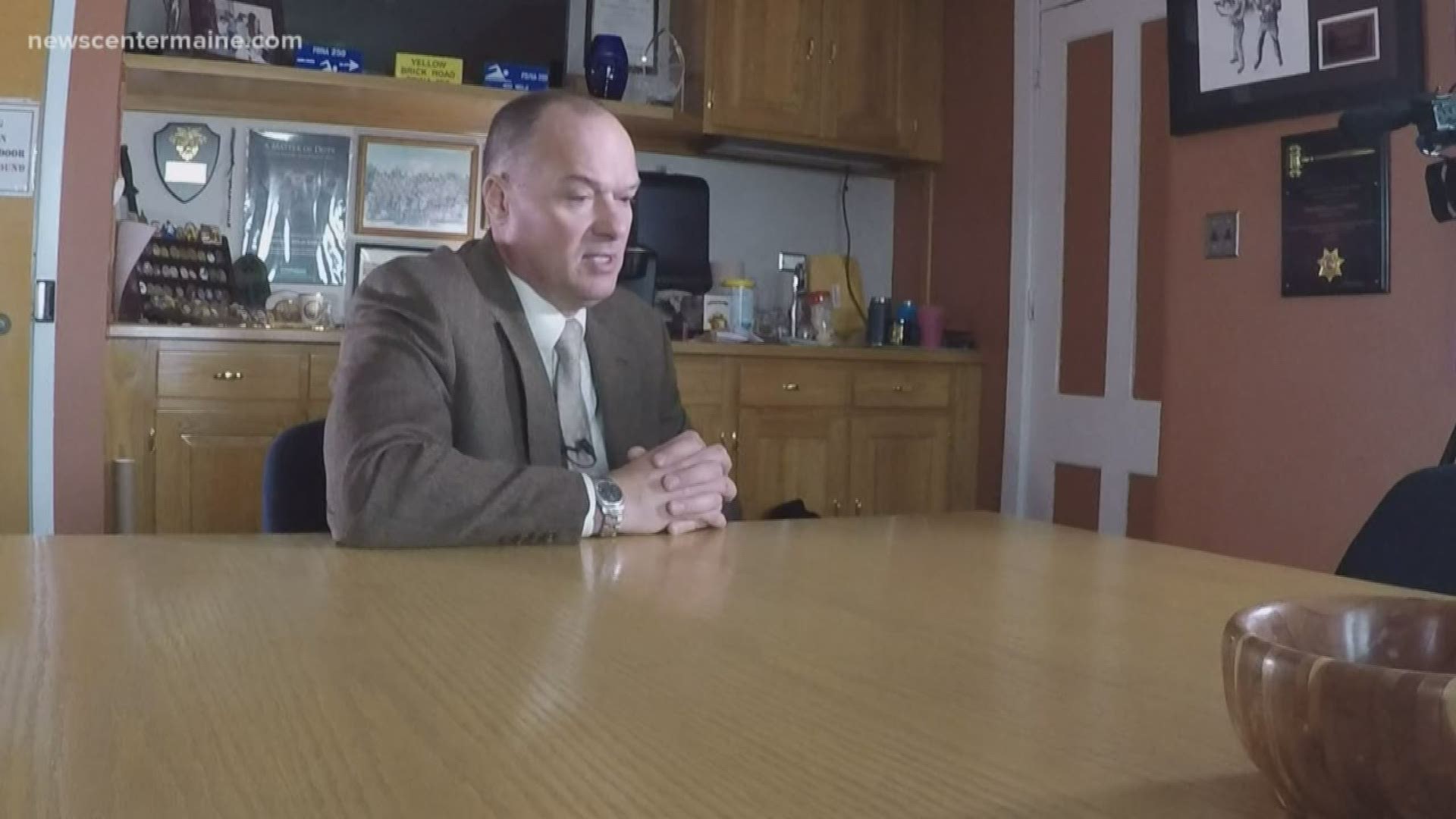 AUGUSTA, Maine — Randy Liberty was no stranger to trauma, even before he went to war and spent decades in law enforcement.

As a child, he watched his mother cope with domestic violence inflicted by his father, an alcoholic. He remembers poverty and relying on government "surplus food" -- he even remembers visiting Santa Claus in 1971 at the Maine State Prison, where his father was incarcerated at the time.

During his time at the Kennebec County Sheriff's Office – where he was sheriff the last nine years -- he witnessed dozens of suicides and fatal crashes. He worked as a drug investigator, handled a police dog and, as a rescue diver, pulled 19 bodies from lakes, rivers and streams.

Liberty also served in the military for 21 years, and in 2004 volunteered for a 10-month stint in Fallujah, Iraq.

During his service in Iraq, for which he received the Bronze Star, he lost about 103 people, including 24 Marines killed when a helicopter was shot down.

"The conversation that you have and the relationships you build in combat are unmatched with any relationship I've ever had in my life,” Liberty says. “And so for you to look in the eyes of someone and say, ‘We're not going to make it out of here,’ you know, that's a pretty frank conversation, you know? And you know, when you see that sort of stuff and the continuousness of it, you have to get good with it.”

As a battalion commander in Iraq, Liberty and his soldiers occupied an abandoned schoolhouse for 10 months supporting a Marine infantry company. They conducted raids and checkpoints, and twice hit roadside bombs

"You could feel it in your organs,” Liberty says of the impact.

He struggled with the responsibility of deciding which soldiers to send on each mission, knowing the might not return.

It's been 15 years since Randy returned from Iraq.

Today, after a stint as warden of the Maine State Prison, he’s commissioner of the Maine Department of Corrections.

What he sees in so many of those incarcerated, and so many in law enforcement and emergency responders, is the same thing – the same thing he struggles with every day.

“When I came back from Iraq, my emotions, really, from post-traumatic stress that was diagnosed later, [were] quick to anger and quick to emotion,” he says. “I couldn’t talk about Iraq without choking up and having to turn away."

His own painful journey with PTSD set Liberty on a new mission – his personal war, or sorts: To help other veterans and members of law enforcement with their own post-traumatic stress.

One of the greatest obstacles, he said, is the unspoken bravado shared by military and law enforcement.

“That would be part of the indoctrination that weakness is not tolerated and you're only as strong as the weakest person and ‘I don't want to hear you whine and complain, suck it up and drive on,’” he says.

Liberty received treatment at Togus VA – treatment, he said, that saved his life.

“There were times I was getting treatment -- every Tuesday I would go -- I would look for any excuse not to go because I didn't want to reopen that wound," he says.

But he hopes that speaking about his experience will encourage others to get help.

“If the sergeant major from Fallujah, a combat infantryman, Bronze Star Randy can admit that he has some emotional scarring from combat, you can come forward too and get treatment and it's not a dishonor to go get help,” he says. “You deserve it and your family deserves to get that treatment because there's light at the end of the tunnel."

You don't have to go to war to be crushed by PTSD, Liberty says. Local police officers, firefighters and other first responders carry the burden too.

Liberty points to 19 different times he raced to a scene hoping to save someone from drowning ... and instead had to retrieve a body.

“In a dive situation, it's a little more challenging because you're in the dark, and often you'll dive multiple tanks, and you won't see and then you'll be startled by the victim,” he says. “That's particularly challenging and emotional.”

“The sheer number of dead bodies is something both combat military and police officers encounter … and it beats a person down," he says.

Liberty is using his experience to create services for veterans who are incarcerated.

While serving as sheriff in Kennebec County, and then as warden of the Maine State Prison, he created veterans’ pods, which allowed veterans to be housed together and provide support through shared experiences. He also worked with Justice Nancy Mills to create a veteran’s court.

“This person was a good citizen prior to doing three tours in Afghanistan as a machine gunner,” Liberty says. “He comes back, he self-medicates, he's angry, he has some issues, that's considered. And then if he does get state time, he can go to the Maine State Prison and receive treatment there.”

In March, Liberty was interviewed for a podcast, "Mindful Things," produced by McLean Hospital as part of its Deconstructing Stigma campaign.

Fighting wars and serving as first responders at home often comes with a price tag: PTSD. At the very least, Liberty says, we should offer compassion and help to those who paid the price.

“Everything I've chosen to do, whether it be diving or executing search warrants for drugs or doing raids in Fallujah, those are all things that are very important and someone had to do them and I feel that I have the capacity to do them," he says. "But that doesn't mean it doesn't come with a cost, but I'm willing to accept that ... It's consistent, I think, in law enforcement and in corrections and in the military that it changes you. But you have to ask yourself, is the mission important enough? Is the job, is the task important enough to endure that? And my answer's always been yes.”

RELATED: Veterans with PTSD, anxiety turn to beekeeping for relief

RELATED: Former Marine helps other soldiers heal by 'walking off the war'