"Together we can prevent suicide and save young lives," Maine lawmakers say in a video posted to social media in support of The Trevor Project. 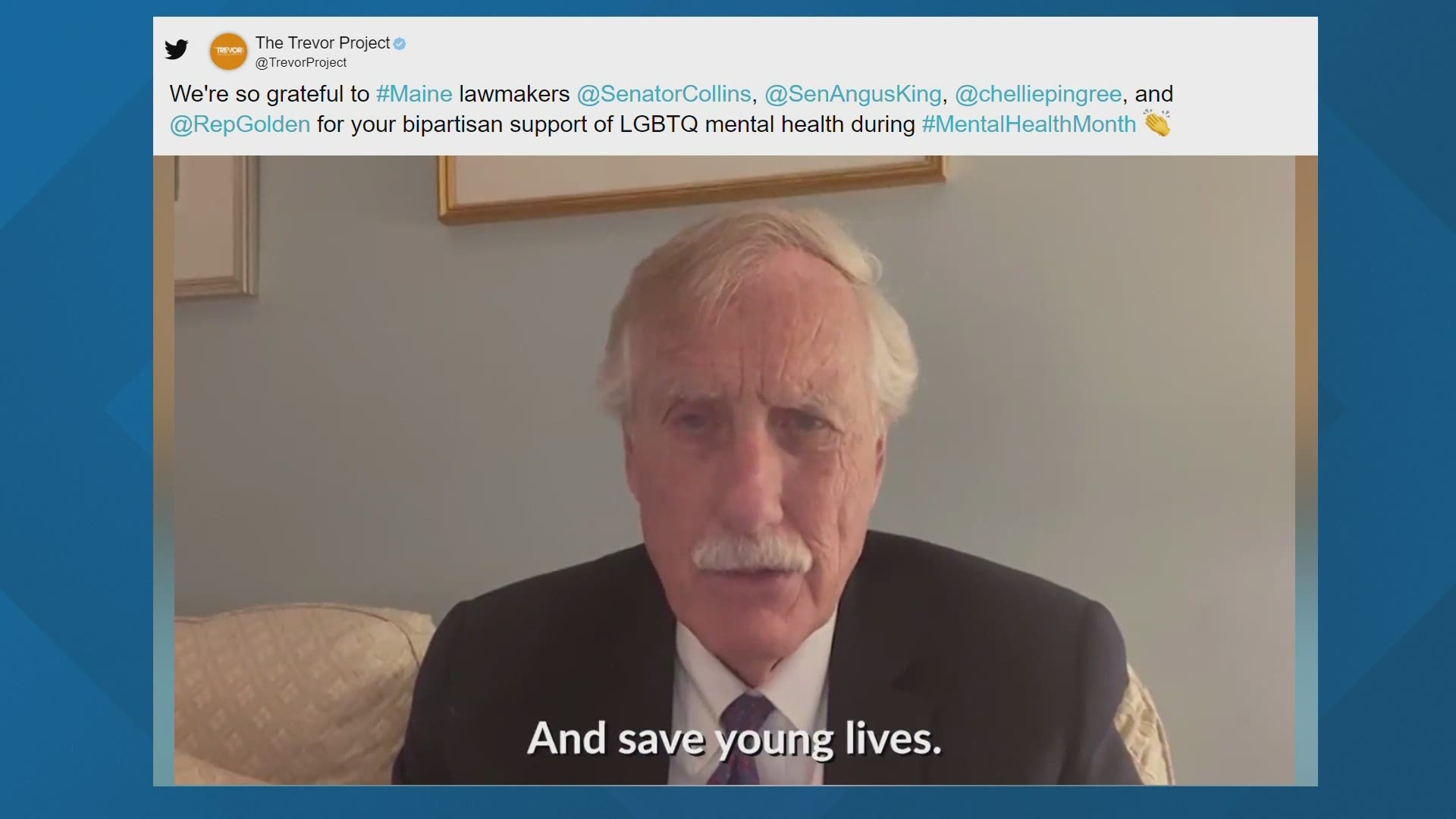 MAINE, USA — As Mental Health Awareness Month comes to an end and Pride Month begins, Maine's lawmakers in Washington are coming together to send one unified message.

Sens. Susan Collins and Angus King along with Reps. Chellie Pingree and Jared Golden joined forces in a video to support The Trevor Project, the world's largest suicide prevention and crisis intervention organization for LGBTQ youth.

In the video, lawmakers say that suicide is the leading cause of death for young people in Maine, and young members of the LGBTQ community are even more likely to consider suicide.

"But there is help and there is hope," Golden says. "This isn't a political issue, it's a public health crisis."

We're so grateful to #Maine lawmakers @SenatorCollins, @SenAngusKing, @chelliepingree, and @RepGolden for your bipartisan support of LGBTQ mental health during #MentalHealthMonth 👏 pic.twitter.com/X9QVlr77Bu

“No one should feel that suicide is their only option, but the sad truth is that far too many teenagers who identify as LGBTQ are struggling and do not feel safe or welcome,” the Maine Delegation said in a joint statement. “We want these young people to know that they are never alone and that there is always hope and help. As National Mental Health Awareness Month comes to a close and Pride Month kicks off, this is a perfect time to help share the resources that are available and to send a message that you are never alone.”

On its website, the Trevor Project's National Survey on LGBTQ Youth Mental Health 2021 reports that "62 percent of LGBTQ youth reported symptoms of major depressive disorder in the past two weeks, including more than two in three transgender and nonbinary youth."

For more statistics on youth in the LGBTQ community, click here.

Throughout May, NEWS CENTER Maine has aimed to break the stigma around mental health with the "Let's talk about it" campaign.

This is designed to normalize the experience of mental health challenges and to decrease stigma by sharing experiences, relaying knowledge from experts, and of course, talking about it.