Adam Daley Wilson discovered art after years as a practicing attorney. He's using that art to bring awareness to the stigma experienced by people with mental illness 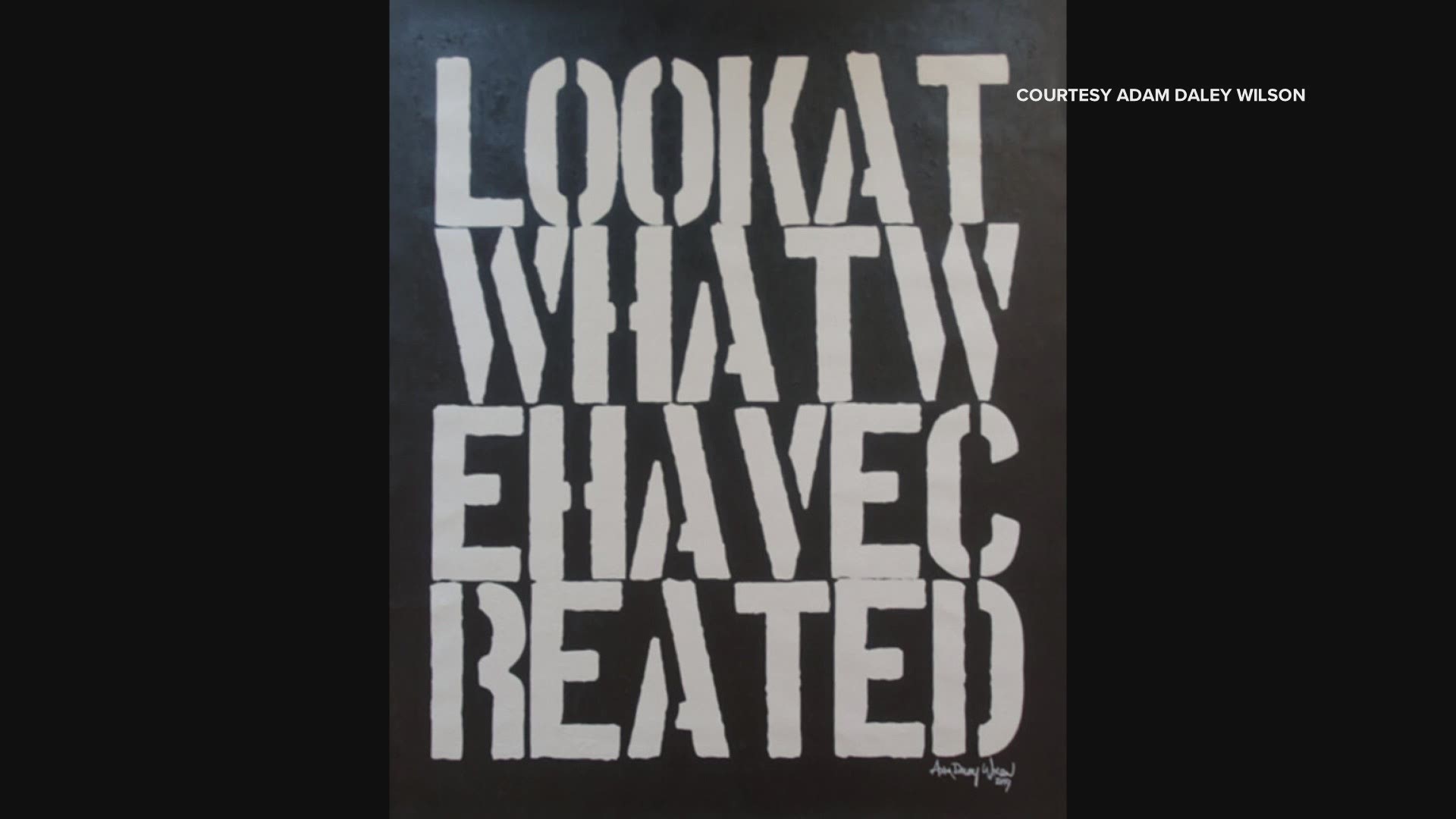 PORTLAND, Maine — Adam Daley Wilson worked with words for 15 years as an attorney before he was ever inspired to explore the meaning of those words on canvas.

Today, when he's not writing legal briefs or parenting two teens, he's creating text-based conceptual art on the wall of his studio -- a hallway less than four feet wide, just two blocks from the Portland Museum of Art.

Stark, provocative words on canvases sometimes the size of that studio wall. Ideas that are often provocative on equally sharp images -- "thought-provoking" work that has appealed to major collectors, one whose collection includes several Warhols, and to the director of Chicago's Aspect/Ratio Projects Gallery, where Daley Wilson's first solo show, "Already Gone," runs through March 13.

"He was describing how he works, that he thinks about [the pieces] for months but then when they come out in five minutes," she told NEWS CENTER Maine. "Nobody else, that I've encountered, at least, is working that way."

The views in his work are intentionally strong, Daley Wilson said, and any one piece could carry many meanings. He won't share the thoughts or feelings, personal or political, that led to his body of work. Instead, he leaves it to the viewer to find their own meaning.

"My favorite thing as an artist [is] when I see somebody have that mental hiccup when they're looking at my work and they thought it said one thing, and they were so sure, and then they realize it could also mean two or three other things," he said. "I think it's a way to change minds."

The title of the exhibit draws on Daley Wilson's life over the past five years, and the mental illness that first prompted his art. For 20 years, he has lived with Bipolar 1.

Daley Wilson graduated from the University of Pennsylvania and then Stanford Law School before practicing at law firms on both coasts, for the government, and for non-profit organizations. He remains a member of the bar in three states and continues to work with law firms nationwide.

About six years ago, he "started to have thoughts and ideas coming out in words." After his doctor tweaked his medication, those ideas became more tangible and he began to transfer them to canvas.

A year later, his work, “Some Feelings and Thoughts I’ll Have Any Second,” showed at a second fair in New York City. The work, he said, "flat-out announced my bipolar to the world" and "started to normalize it."

Credit: Adam Daley Wilson
Portland artist Adam Daley Wilson's first art fair exhibition, in New York City in 2017, featured the 12-foot installation, "Some Feelings and Thoughts I'll Have Any Second." Daley Wilson said it includes 256 questions and statements he thought in about three minutes. The exhibition marked the first time the artist "flat-out announced my bipolar to the world."

His experience with Bipolar 1 is reflected in his art, although his work expresses a much broader range of ideas.

The piece, "Species Anosognosia," takes its name from a term describing "people so mentally ill that they don't even realize they are," Daley Wilson said. "It's the idea that it's not denial. It's not refusing to see. It's just honestly not being able to see it."

"Species Anosognosia" is also a comment on society in general, he said: "The simple idea that we don't have anosognosia, that we do know what we're doing."

Armetta recalled the head curator of the Museum of Contemporary Art looking at one of Daley Wilson's pieces during the group show there.

"You know, I would be lying to you if I didn't say that it's exceptionally difficult sometimes ... there's some days in depression you don't want to get out of bed in the literal sense, or in the mental sense," he said."And yet I know so many courageous people who do. They get out of bed, they move forward, and that's what I've found I've been able to do with a lot of work and a lot of help."

Daley Wilson said he diligently takes prescribed medication, visits his doctor, manages stress, and works to stay healthy in general because it helps regulate symptoms of bipolar. He's also learned to monitor himself for signs of change.

"You get to know and you're trained in how to recognize all of the tells, just like in poker, that go to warning signs so you can catch it," he said. "As you start to go down, but especially as you start to go up, you lack that insight."

But the physical and psychological effects of bipolar are only part of the story. He said the stigma experienced by people with mental illness can be equally devastating.

"It is devastating to be silenced by an entire culture or an entire group of people, to have anybody try and just diminish and demolish your self and your sense of self and your credibility and your character just because you happen to have a diagnosable illness. It's crushing.

"It is scary to care about yourself enough and have enough compassion to rise above the shame and, not just the stigma, but the ... it's an absolute decapitation of the self that comes when people marginalize you and treat you as something horrible just because you have a mental illness."

"Nobody would discriminate against somebody with cancer or diabetes, nobody would give somebody with Alzheimer's a hard time ... people with mental illness get this all the time ... and it hurts, and it's hard to rise above. It is as difficult to move forward on as the most severe depression."

But his art encompasses more than his experiences with bipolar.

"It's also about my experiences as an adult in this society and as somebody who's tried to look cross-culturally to see what goes on in the world," he said. "So I try and bring a lot of things to it."

Daley Wilson said he hopes people see his art as an attempt to participate in the larger conversation in the world – and how insight may or may not be helping the world save itself.

“It just doesn't really seem to square with what all species are supposed to do which is survive ... and it really doesn't seem to be squaring with any kind of moral or ethical or spiritual or faith construct that anybody seems to want to have or purport to have across the globe, not just western [culture]."

Armetta said the "seminal" piece in the current show is “You Could Not Be a Less Relational Self,” a 54-inch-by-117-inch oil on new media that includes the text, "I could not forget you more."

With his art already in "a few fairly sizeable collections," Armetta said the logical next step for Daley Wilson would be to continue to be noticed by critics, but even more, by curators, and perhaps to be included in a group showing at a museum.

Daley Wilson hopes his art will expose the stigma experienced by those with mental illness -- the stigma he experienced while practicing as an attorney.

Locally, he recently became chairman of the board of directors of the Yellow Tulip Project, a Maine-based, youth-run non-profit organization that works to end the stigma associated with mental illness. 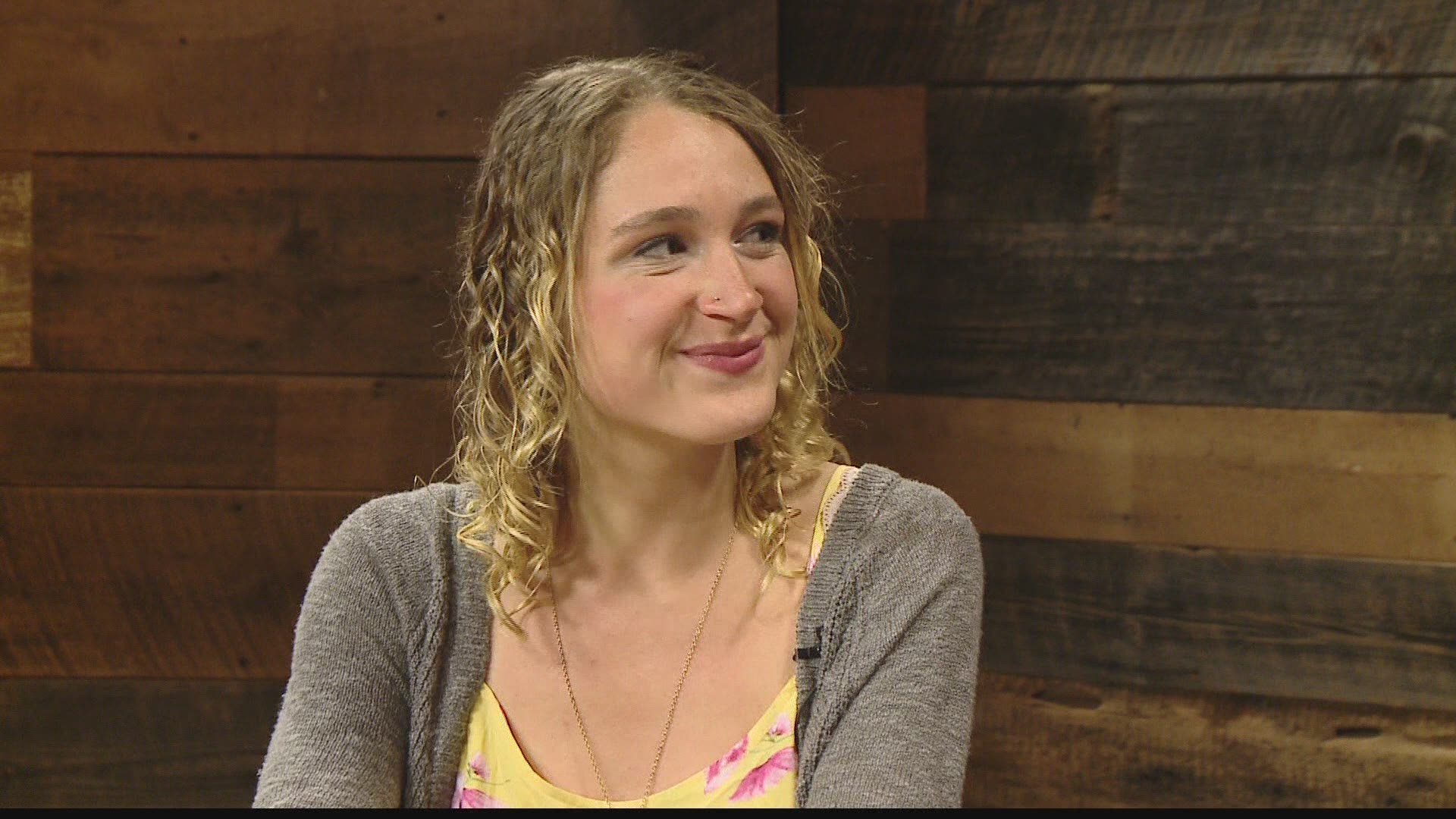 "You know, it comes down to, 'If you don't do it, who else is?' and, 'Are we going to stay silent forever?' and 'Are we going to be muzzled forever?'" he said of working to defeat stigma. "Or are we just going to be who we are? Do we have a right to say, 'Here I am. You don't have to like me, but I'm going to let you know who I am.'Because this happens to be who I am, and there happen to be downsides, and I'd like those downsides to be fixed. I'd like the stigma to go away, just like I'd like there to be more access to mental health [treatment] and to medicine, so people who have a legitimate illness get a chance to come out of the shadows and get some help."