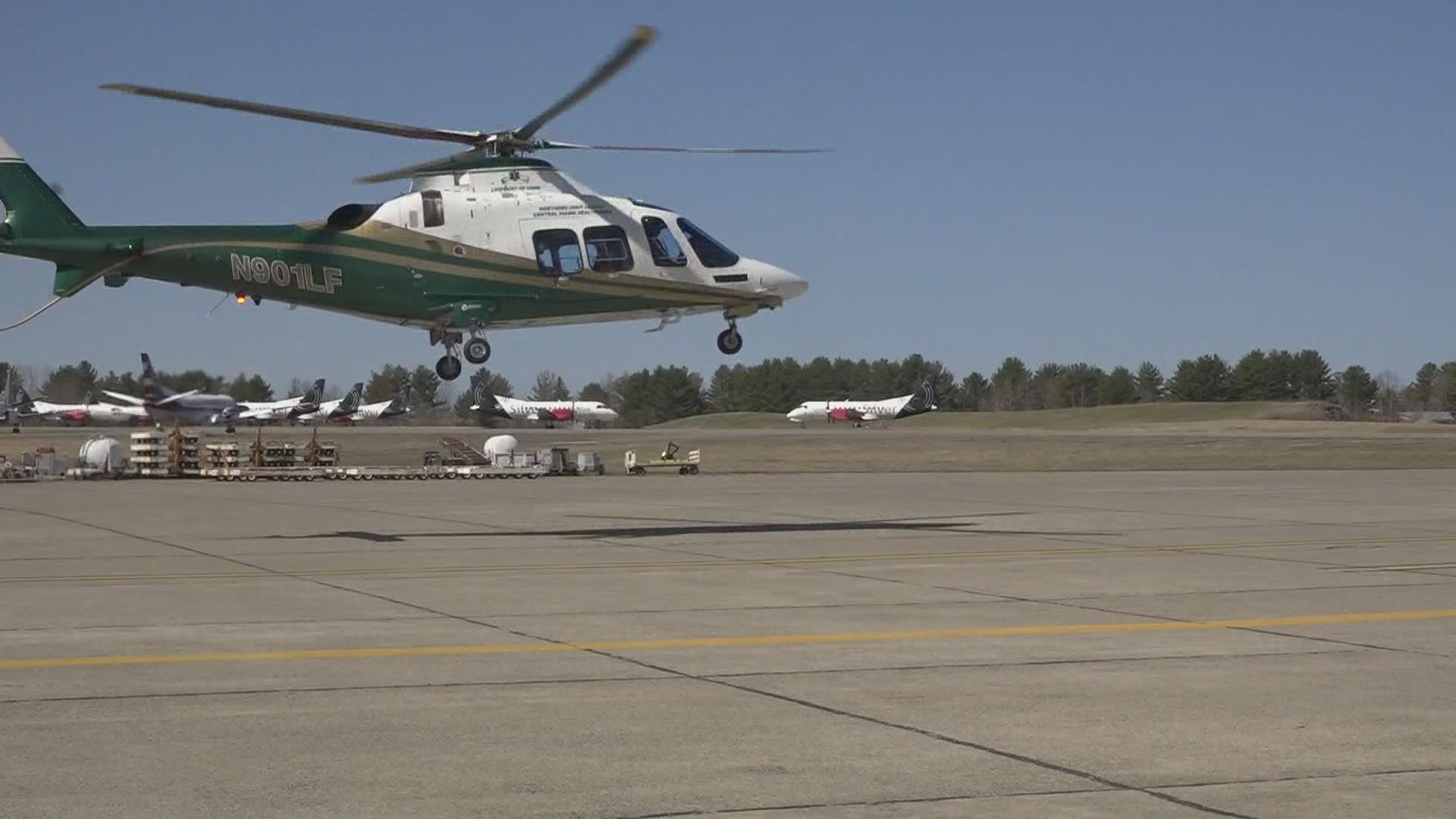 BANGOR, Maine — LifeFlight of Maine has been getting to emergency scenes a bit faster these days because of two new state-of-the-art helicopters.

Both are replacing old ones that had been serving Mainers for 16 years. The new helicopters come with better capabilities, enabling crew members to better assist critically ill Mainers.

Thomas Judge is the executive director of LifeFlight of Maine. He said the LifeFlight crews' one goal is to help save lives.

"The aircrafts are faster, more efficient from a fuel burn stand-point, longer range, and they have advanced avionics to be able to do precision aviation. We can fly in conditions that we couldn't fly in before. We can carry more weight," Judge said.

LifeFlight made the $6.5 million investment for each of the two helicopters to provide even better services to critically injured Mainers.

"We are five generations into the newer aircraft, and so this is an investment into the state of the art technology to make sure we are doing the best things for patients," said Judge.

This new @LifeFlightMaine helicopter might look just like the old ones, but it’s nowhere near. LifeFlight purchased two new $6M helicopters that can fly farther and quicker, has more room inside, better technology...all to provide better critical care. #NEWSCENTERmaine pic.twitter.com/lrUMYBmtMi

Judge said Maine has the toughest aviation weather, outside of Alaska, having the latest technology is key in their rescue missions all throughout the state.

"We can fly in conditions that we couldn't fly in before, we can carry more weight," said Judge.

The helicopter purchases were possible because of community donors.

"Thousands of Mainers, who have come together to say this is important, if this is my loved one, if this is me, I want to make sure that LifeFlight is there when needed," said Judge. "Without philanthropy, without people that support the public, we can't deliver our mission."

Judge said these helicopters will increase the ability to take care of even more patients by about eight percent, which is about 200 critically ill Mainers a year.

"It certainly is slightly faster which is nice when you have a state the size of Maine and you kind of have to serve the state with three aircraft," said Stephen Leavins, a LifeFlight paramedic in Bangor. "It includes a compressor for medical air, and that comes really handy with our NICU trips when we are taking pre-mature babies."

LifeFlight has three bases in Maine: one in Bangor, one in Lewiston, and one in Sanford. Bangor and Lewiston recently got the new helicopters.

"We fly a lot, we are a very busy service," Leavins said.

LifeFlight transports more than 23,000 patients a year, it approximately does 1 mission every four hours.

"So it isn't about shiny and new, it's about technology that we are investing in, on behalf of patients," said Judge.

On Thursday, April 15, LifeFlight at 5 p.m. will host a Facebook Live event to show off the new aircraft.

The 'Future is Bright LIVE Aircraft' event will be broadcast live to Facebook from the Bangor hangar and will include:

You can email info@lifeflightmaine.org with questions.