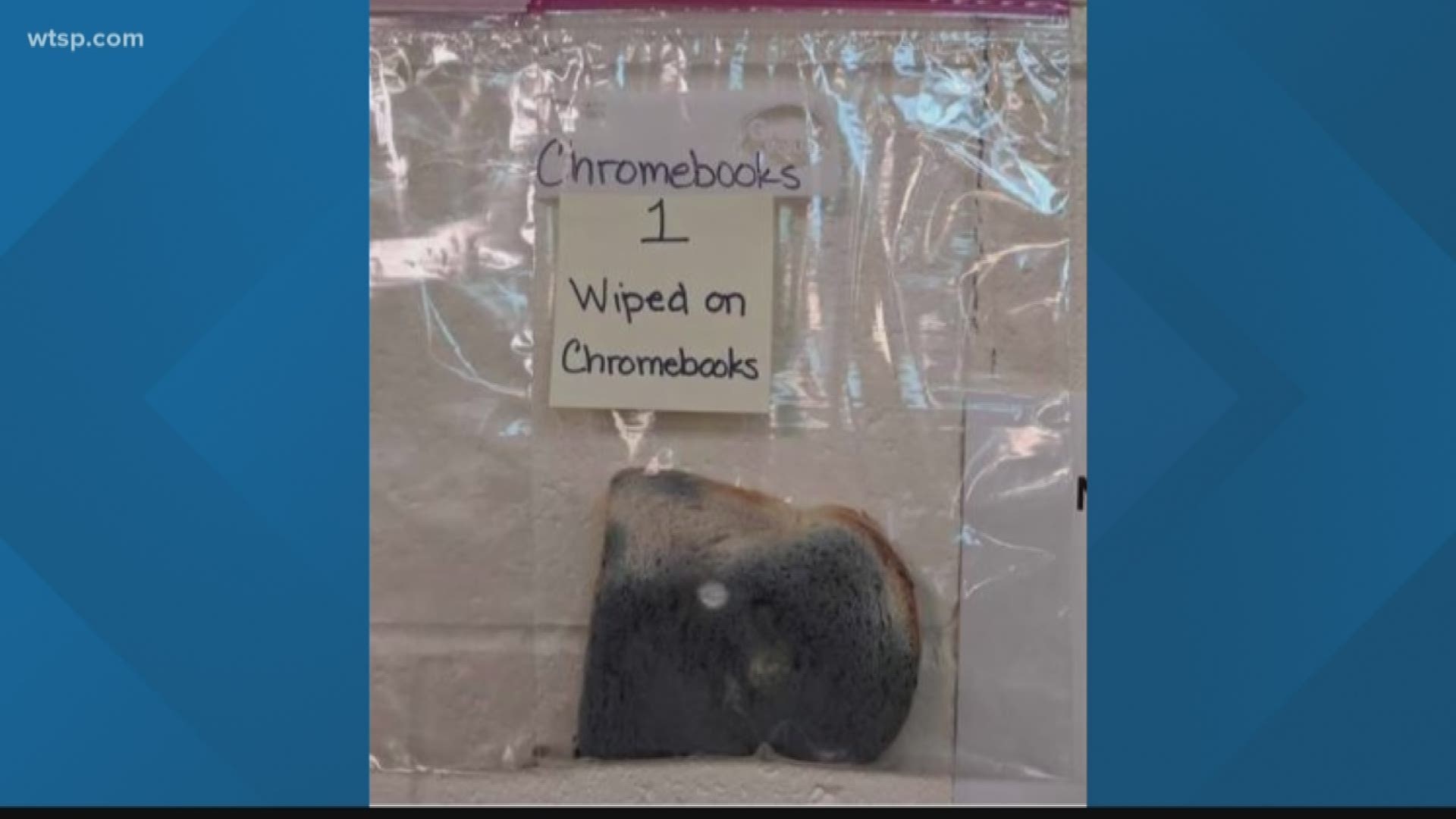 IDAHO FALLS, Idaho — Just in time for flu season, a teacher in Idaho did a little experiment to show her students the importance of washing hands and sanitizing workspaces.

Vaccines are still considered the most effective way of battling the flu. But also, washing your hands frequently is an important bit of advice healthcare officials often share.

Now, that message is being driven home by a little science experiment that’s gone viral on social media.

Jaralee Annice Metcalf did the experiment last month, just as flu season was starting. She and her students took five slices of plain white bread and touched one with dirty hands, one with hands washed with soap and water, one with hands that used hand sanitizer, one slice wiped on their Chromebooks and one kept fresh and untouched.

They put each slice in separate plastic baggies and sealed them. They then left them in the baggies for 3-4 weeks. The results were gross.

The only slices that didn't show widespread mold were the control slice (fresh and untouched) and the slice touched with hands that had been washed with soap and water. All the other slices had mold.

The slices with the most widespread mold were the ones touched by dirty hands and wiped over the Chromebooks.

Metcalf clarified that the baggies used are meant for raw meat and they were sealed tight. She also said her class usually sanitized the Chromebooks, but didn't for the experiment.

"We are an elementary school. Not a fancy CDC lab, so relax a little and WASH YOUR HANDS," she wrote.

In Florida, peak flu season is usually January through February, whereas nationwide it typically peaks in December. According to the Florida Department of Health, flu activity this month has been above average throughout the state.

The department said flu activity remained elevated in children for this time of the season.

But handwashing won’t necessarily help once you get sick, which is why they also strongly encourage immunizations.

“Getting a flu shot, we have seen,” said Wiese, “has prevented people from getting more seriously ill if they get sick with influenza as well as preventing hospitalizations and deaths.”

The sliced bread experiment demonstrates the difference over time between bread contaminated with germs from the classroom’s chrome books to slices untouched, contaminated by dirty hands, and those cleaned with soap and water or hand sanitizer.

“I think it's good knowledge. I think that people think that hand sanitizer kind of like does the job. But it looks like you need to maybe like a get things off completely off from your hands not just rub it into your hands,” said Shalee Klaff, a Tampa baby sitter who was admittedly grossed out by the photos.

The timing, says the health department, couldn’t be better for this little experiment to be popping up on social media, because the flu is running rampant in more than 20 states right now. That’s earlier in the season than usual.

Parents we spoke with say their trusty bottle of sanitizer is never far away.

“I think that it would really persuade them that they need to encourage handwashing, and always have hand sanitizer available,” said Tampa mom Elizabeth Hill.

The advice to wash your hands frequently isn’t exactly new information, but for some reason, the message doesn’t always get through.

Health workers and parents hope the images - as gross as they may be – will get that point across.

“You can’t deny what this is showing you. And a lot of people have to see something to see to learn something,” said Hill. “So, I think it’s very good that you see what it’s like and you can understand maybe a little bit better.”

RELATED: Winter flu season is here early, could be intense

RELATED: Peak flu season is here, and Americans still don't know how to wash their hands