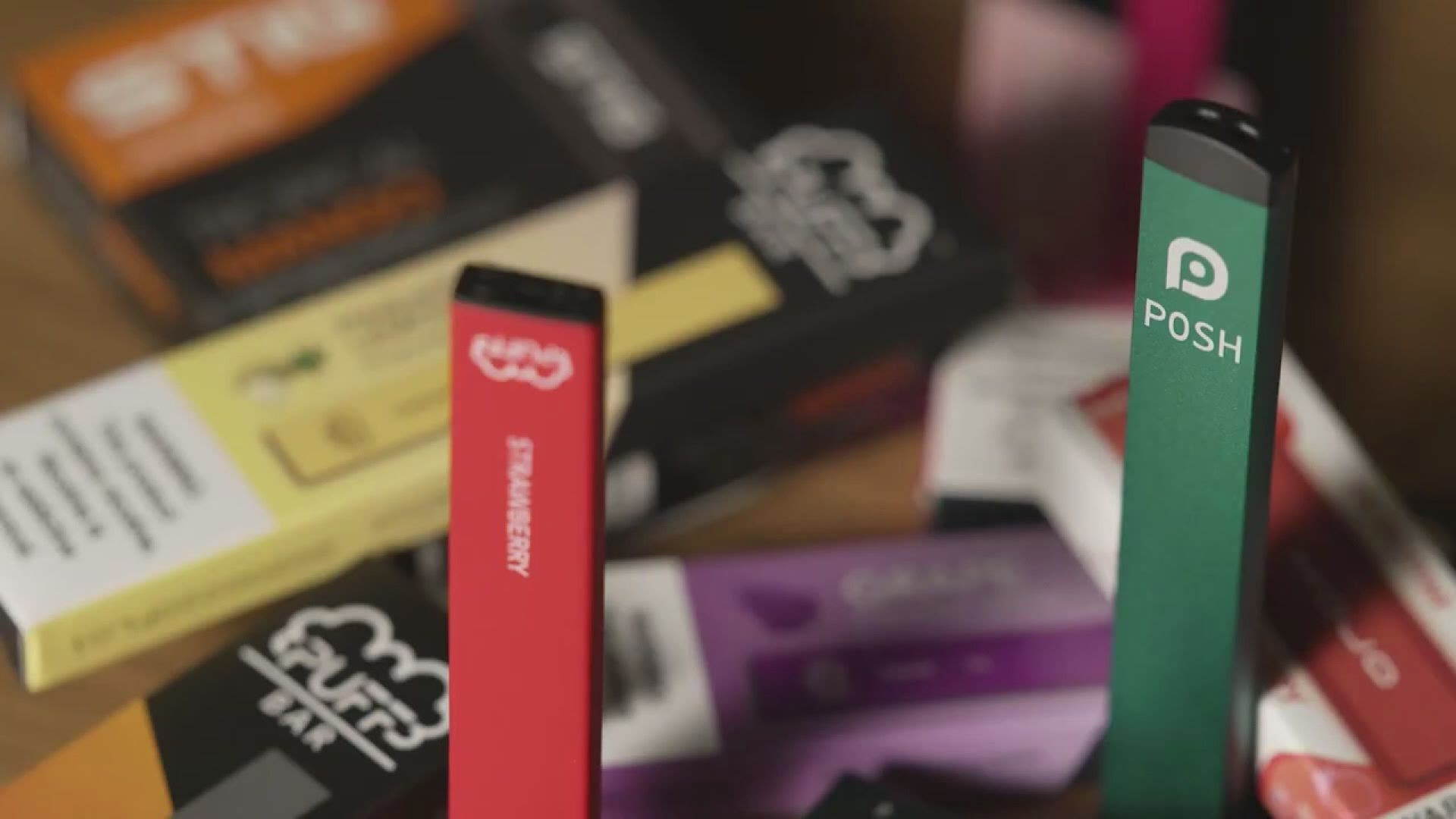 AUGUSTA, Maine — A new public health campaign was launched Monday to end the sale of all flavored tobacco products in Maine.

“Tobacco use among Maine youth is skyrocketing,” Hilary Schneider, Government Relations Director at the American Cancer Society Cancer Action Network (ACS CAN), said in a release. “Data shows that four out of five kids who have ever used tobacco started with a flavored product, and that’s not an accident. Tobacco companies have developed an array of menthol, mint, and candy-flavored products because they know that’s how to addict their next generation of customers."

According to a study by the Journal of Medical Internet Research, there are over 15,000 flavored tobacco products on the market, including flavors like Winter Menthol, Peppermint Mocha, Cherry Crush, Banana Blast, Pop Tart, and Cotton Candy. Flavors are used in a variety of tobacco products, including cigarettes, cigars, chewing tobacco, and e-cigarettes.

African Americans suffer the greatest burden of tobacco-related mortality of any racial or ethnic group in the United States, the U.S. Department of Health and Human Services (DHHS) found in a 1998 Report of the Surgeon General.

A 2018 drug use and health survey by the U.S. DHHS found that more than eight out of 10 Black adults who smoke use menthol cigarettes.

Research has shown that menthol flavoring makes it easier to start and become addicted to cigarettes.

“The science of menthol makes it the most dangerous flavored tobacco product,” Dr. Jeffrey Stone, a pediatrician from Waterville, said. “Menthol numbs the throat and masks the harsh taste of tobacco, making it easier to inhale and inhale more deeply."

The campaign says the use of flavors to lure and hook kids was called out by other speakers at Monday's event, and all spoke of the need for a reckoning with the generational health disparities caused by tobacco industry targeting. LGBTQ adults smoke at rates up to two and a half times higher than straight adults. One in three transgender adults smoke cigarettes, and one in three LGBTQ smokers smoke menthol. Shane Diamond, who identifies as trans and queer, highlighted the tobacco industry’s targeting of LGBTQ communities with predatory advertising in magazines and sponsorships of local Pride events and celebrations.

“The tobacco industry sold us on a feeling – a feeling of comfort, of connection, and often, of momentary escape,” said Diamond, who recently quit smoking. “They used our daily experiences of homophobia and transphobia and otherness, and they built us a community and a culture that drew us in, that normalized tobacco use and made us feel accepted and cool, even as it was impacting our health – even as it was literally killing us. Flavored tobacco products are just part of the bait.”

Wabanaki Youth Council member Eben Francis of the Penobscot Nation spoke about the unjust commercialization of a sacred medicine to his people.

“In our culture, we use tobacco as a way to give thanks. It is sad to see something of cultural significance being used to exploit young people. Even as a 13-year-old, I know people my age who have used e-cigarettes or other commercial tobacco products. Tobacco companies use flavors and fun names to attract kids. This clearly shows that we are being targeted, which is scary for many reasons.”

“Smoking harms nearly every organ of the body and causes cancer, heart disease, lung disease, stroke, diabetes, and COPD,” said Dr. Stone, “But let’s not forget the brain. Our brains are still growing until age 26, making youth and young adults much more susceptible to nicotine addiction. This simple fact is why the tobacco industry is continually looking for new ways to attract kids, and why lawmakers must counter with public policies that give our young people a fighting chance to grow up tobacco-free.”

Tobacco use among Maine youth is on the rise. Maine’s high school smoking rates are higher than the national average and the second-highest in the Northeast. In 2019, 1 in 3 Maine high school students used some form of tobacco, including cigarettes, smokeless tobacco, cigars, and electronic cigarettes. That’s a 33% increase since 2017. More than one in four Maine high school students now use e-cigarettes, a rate that has nearly doubled in the past 2 years. The U.S. Surgeon General has warned, “No matter how it's delivered, nicotine is harmful to youth and young adults.”

“Like many physicians and parents, I’ve watched the explosion of youth e-cigarette use, or “vaping” in my community, added Dr. Stone. “The negative impact on some of my young patients – their health and readiness for school and sports– has been dramatic. Some of these devices deliver much more nicotine, much deeper into the lungs. For example, one Juul pod contains as much nicotine as a pack of 20 cigarettes.13 E-cigarettes come in literally thousands of flavors, like Cotton Candy, Strawberry Shortcake, and Purple Haze."

Last week the American Lung Association released its “State of Tobacco Control 2021” report card, which grades each state and the District of Columbia on five policy areas that have been proven to prevent and reduce tobacco use and save lives. Though receiving several “A” grades for strong smoke-free workplace laws and programs to help tobacco users quit, Maine received a grade of “F” for failing to end the sale of menthol and all other flavored tobacco products.

Reflecting on the current coronavirus pandemic, Dr. Stone stated, “While some may say we can’t take on tobacco during the COVID epidemic, I say there is no better, more important time to do so. Now, more than ever, preventing tobacco use and nicotine addiction has got to be a priority.”

“The tobacco industry preys on marginalized communities,” Diamond said. “They lure us, they hook us, they addict us, and they make it as hard as possible to quit. Today we call for justice and equity. It’s time to end the sale of menthol and other flavored tobacco products.”

The Flavors Hook Kids campaign is already supported by over two dozen statewide and community partners. They intend to build their coalition, educate lawmakers, and raise the voices of Maine youth, young adults, LGBTQ, and communities of color, calling for an end to tobacco-caused health disparities and a chance for the next generation of Maine kids to grow up tobacco-free. More information about the Flavors Hook Kids campaign can be found here.