Maine drug overdose deaths up 4% in second quarter of 2020, in part due to pandemic

A report released Wednesday by Maine's Attorney General and Chief Medical Examiner points to 'isolation of living through the pandemic' as one cause of the increase. 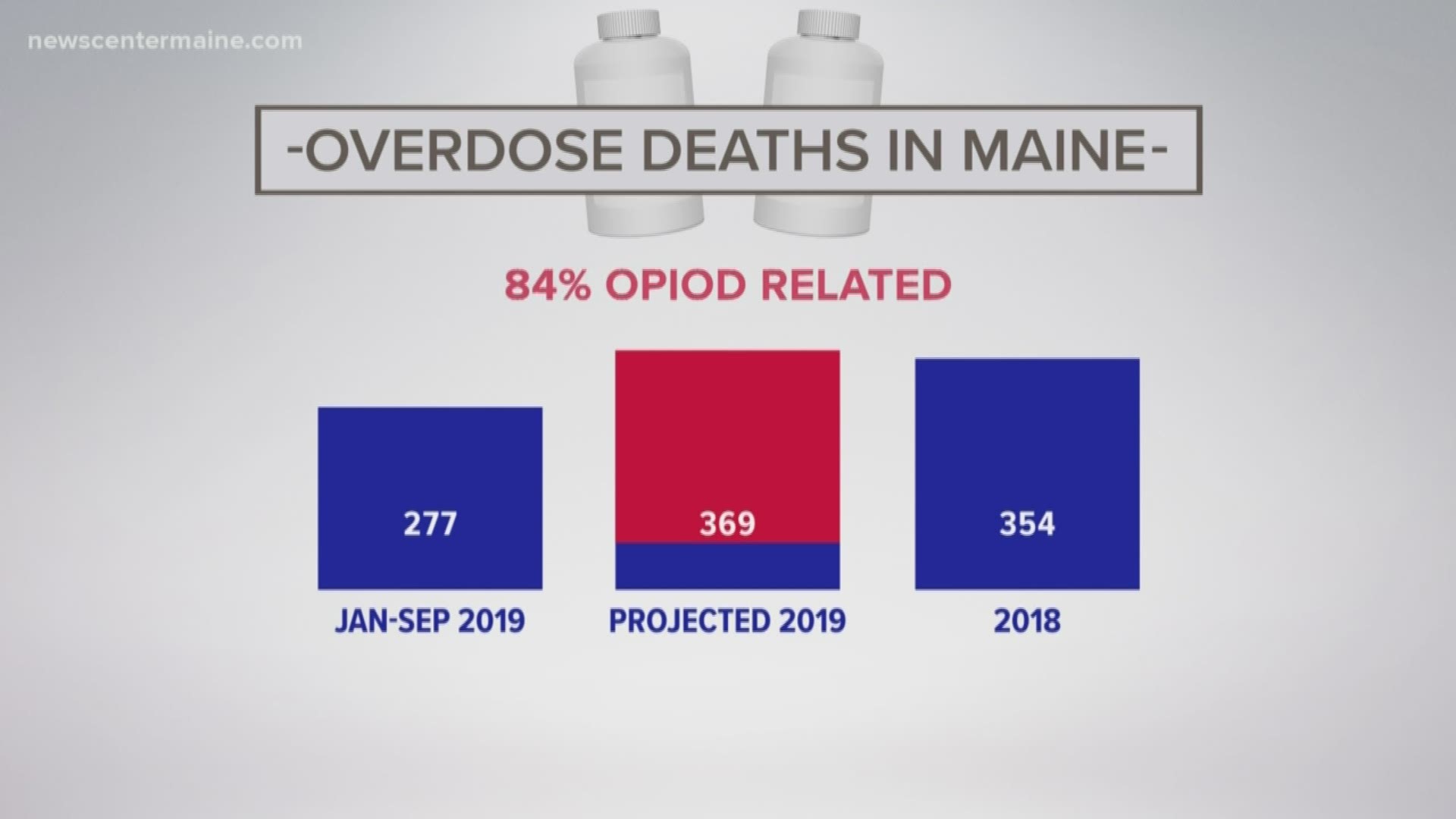 AUGUSTA, Maine — During the first half of 2020, 258 Mainers died of drug overdoses, a 27 percent increase over the last half of 2019 and a trend seen throughout the country as people continue to struggle with the COVID-19 pandemic.

Drug overdose deaths in Maine were up four percent, to 132, during the second quarter of 2020.

The statistics were released Wednesday by Attorney General Aaron Frey and Chief Medical Examiner as part of a report by Dr. Marcella Sorg of the University of Maine's Margaret Chase Smith Policy Center.

Of the 258 overdose deaths, 82 percent were caused by at least one opioid, the report states, and 81 percent by two or more drugs.

Pharmaceutical opoids caused one quarter of all deaths, almost always in combination with other drugs, according to the report.

Sixteen deaths, or six percent, were ruled deaths as a result of suicide, while 236 (91 percent) were accidental and six (2 percent) were undetermined.

In a statement, Frey attributed the increase in deaths in part to "the increased isolation of living through the pandemic"—factors spelled out in the report as "isolation, avoidance of medical services, and alterations in the illicit drug supply."

Eight percent of the fatal overdoses in 2020 were of individuals experiencing homelessness. Nearly two-thirds of the deaths involved the synthetic painkiller fentanyl or a fentanyl analog, according to a release from Gov. Janet Mills.

Also on Wednesday, Mills announced an initiative designed to combat the increase in fatal drug overdoses experienced throughout the pandemic.

Set to begin in November, the OPTIONS (Overdose Prevention Through Intensive Outreach, Naloxone and Safety) initiative will provide mobile response teams in each county in the state to work with groups at high risk of overdoses, such as people experiencing homelessness, those who have left treatment programs and those recently released from jail, "to promote drug prevention and harm reduction strategies," connect people to recovery services and treatment and distribute naloxone or Suboxone.

The teams will share public information including warnings about the dangers of fentanyl, reducing the stigma of substance use disorder, and emphasizing the importance of calling 911 immediately during a suspected overdose.

“The COVID-19 pandemic is a destabilizing and deadly time for persons in recovery across the entire country,” Gordon Smith, Maine’s Director of Opioid Response, said in a release. “We know that we cannot pave the way to recovery if we can’t keep people alive. The OPTIONS initiative will provide on the ground, lifesaving support in communities across Maine to ensure that people have a chance to seek the help they need to recover from substance use disorder.”

“This initiative will connect them with familiar faces in their communities who know how to help in a moment of crisis and all along the path toward recovery," Dr. Jessica Pollard, director of the Office of Behavioral Health at the Department of Health and Human Services, said in part, in the release.

The OPTIONS initiative will be funded by $2.5 million in existing federal funds including $500,000 in coronavirus relief funds through the Office of Behavioral Services at Maine DHHS and will operate with assistance from the Maine Center for Disease Control and Prevention, the Maine Department of Public Safety, and in partnership with regional behavioral health providers and recovery centers, local law enforcement, emergency responders, coaches and others, according to the release from Mills.