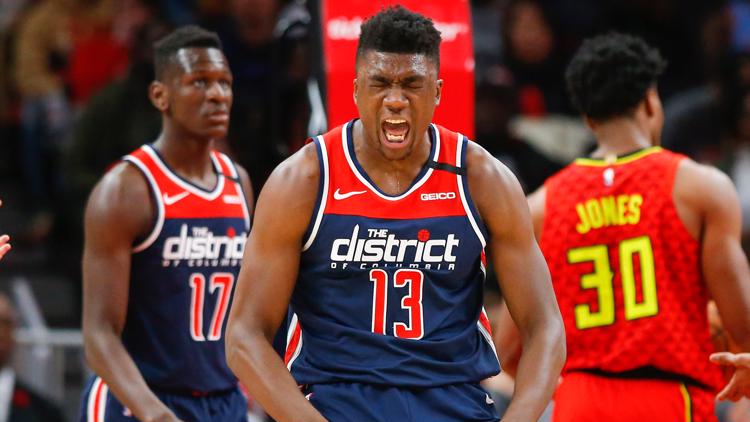 Photo by: AP
Washington Wizards center Thomas Bryant (13) reacts after a slam during the first half of an NBA basketball game against the Atlanta Hawks, Sunday, Jan. 26, 2020, in Atlanta. (AP Photo/Todd Kirkland)

WASHINGTON — The Washington Wizards on Thursday announced that following the news that a Utah Jazz player has been diagnosed with coronavirus, the team, coaches and basketball operations personnel will self-quarantine for the next three to four days for possible exposure to the virus.

The Wizards issued the following statement:

"Under the direction of team and MedStar medical staff, the Washington Wizards have advised players, coaches and basketball operations personnel to self-quarantine for the next three to four days. The decision was made with an abundance of caution due to the team’s recent game schedule, which saw them play at Utah on Feb. 29 and against New York (who played Utah on Mar. 4) on Mar. 10.

Players, coaches and basketball operations staff who exhibit or develop flu-like symptoms will be tested for COVID-19.

The Wizards and Monumental Sports & Entertainment will continue to monitor the situation with an emphasis on ensuring the health and safety of our fans, employees and players."

The NBA on Wednesday night suspended its season to help combat the spread of the coronavirus. This means the Wizards season is suspended.

Below is the full statement from the NBA on it suspending its season:

"The NBA announced that a player on the Utah Jazz has preliminarily tested positive for COVID-19. The test result was reported shortly prior to the tipoff of tonight’s game between the Jazz and Oklahoma City Thunder at Chesapeake Energy Arena. At that time, tonight’s game was canceled. The affected player was not in the arena. The NBA is suspending game play following the conclusion of tonight’s schedule of games until further notice. The NBA will use this hiatus to determine next steps for moving forward in regard to the coronavirus pandemic."

The Washington Wizards currently are 24-40 overall on the season.

Rudy Golbert, a center for the Utah Jazz, has coronavirus. This information has been confirmed by the AP.

This news comes less than two weeks after the Wizards played the Jazz in Utah.

Bowser did say in the news conference that she is asking people and organizations to limit gatherings over 1,000 people. Due to the state of emergency, she does have the authority to prohibit events of this nature, but she did not order that, as of yet.

Monumental Sports, who own the Wizards, Washington Capitals and Mystics, also said it would still have fans attend games.

This is a developing story with more information come.