The President's directive comes after Maine shifted to an age-based approach that essentially dropped the prioritization of people by occupation or health condition. 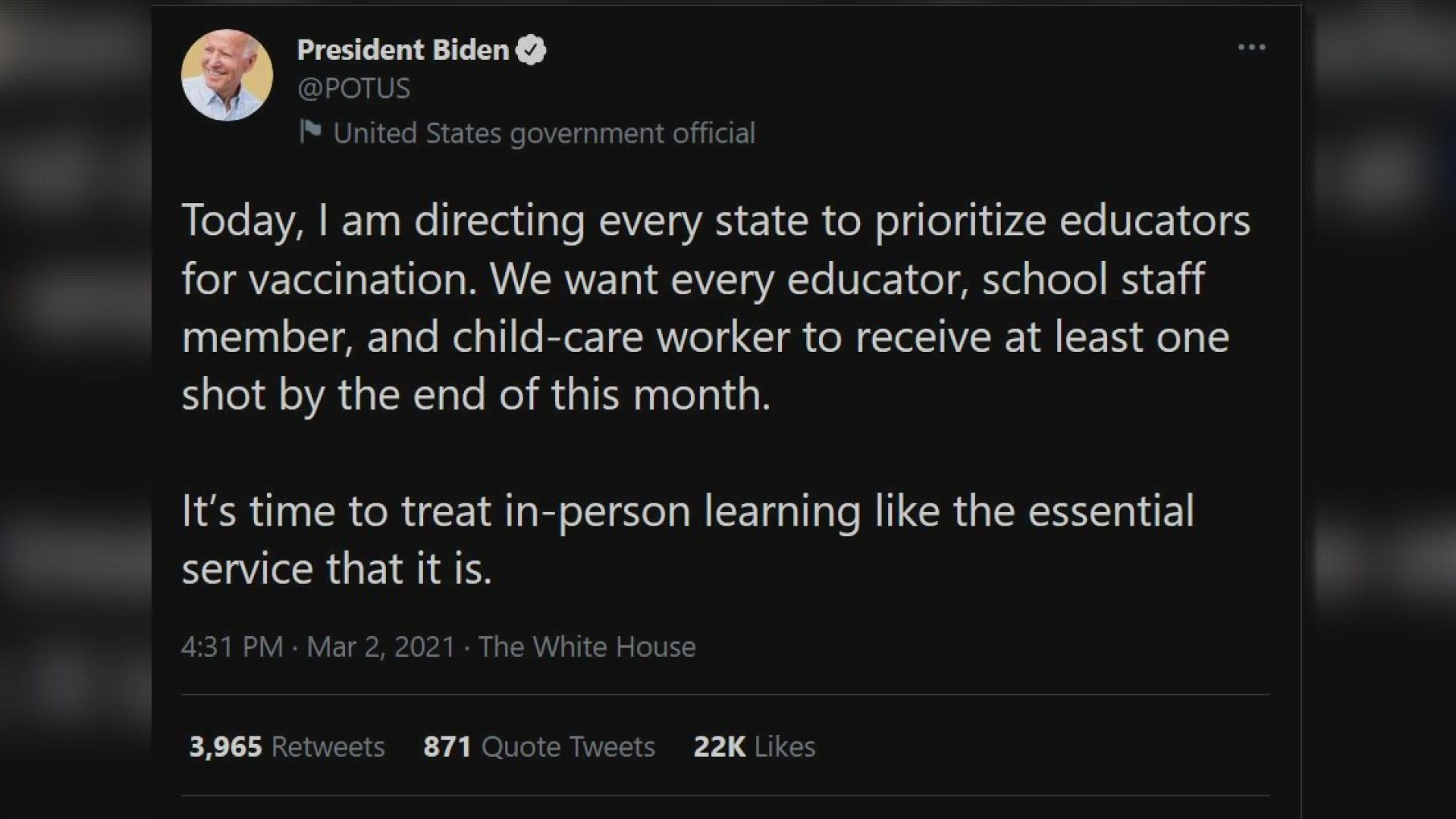 PORTLAND, Maine — School staff across Maine have been wondering for months if they would be given priority to get a COVID-19 vaccine.

Under Maine's phased approach, Phase 1b held the potential for teachers to get that priority, but the state never finalized those plans.

Governor Janet Mills announced Friday that Maine would switch to a solely age-based approach, in essence, dropping any preference given to people of certain occupations or with underlying health conditions.

"I’d suggest interviewing some teachers about the heartbreak and surge in anxiety that went with Friday’s announcement. Teachers’ mental health has been wrecked this year, and the government has done nothing but applaud our work as they turn their back on us," tweeted 'Carl,' a 32-year-old education technician who works in Cumberland County who did not want to be identified.

But Tuesday, President Joe Biden announced that the U.S. would have enough doses of vaccine for the entire adult population by May, and he directed states to focus on educators getting their first shots by the end of March.

NEW from President Biden. @nirav_mainecdc @MEPublicHealth @MaineDHHS have a plan to set up dedicated sites for educators, but no plans announced yet. #maine @newscentermaine #COVID19 https://t.co/ypj3YWjWpE

"The Governor shares President Biden’s goal of vaccinating school staff and child care workers — as well as those most at risk of serious illness and death from COVID-19 and the rest of Maine residents — as soon as possible. Today’s news about more doses coming faster could help us achieve this goal, and the Governor looks forward to receiving more information from the White House about this expected increase in vaccine supply."

"It’s unfortunate that it took action from the President to make this happen, as we really thought Janet Mills was going to have our back," wrote 'Carl.' "I was very happy with the strong language our union (the MEA) used to advocate for us."

During Friday's announcement of the age-based approach, Maine DHHS commissioner Jeanne Lambrew said the state would establish dedicated vaccination sites for educators, but that those sites would still follow the eligible age groups. Lambrew said there are about 10,000 educators in Maine who are age 60 and older, which is the first age bracket to become eligible under the new system, which takes effect Wednesday, March 3.