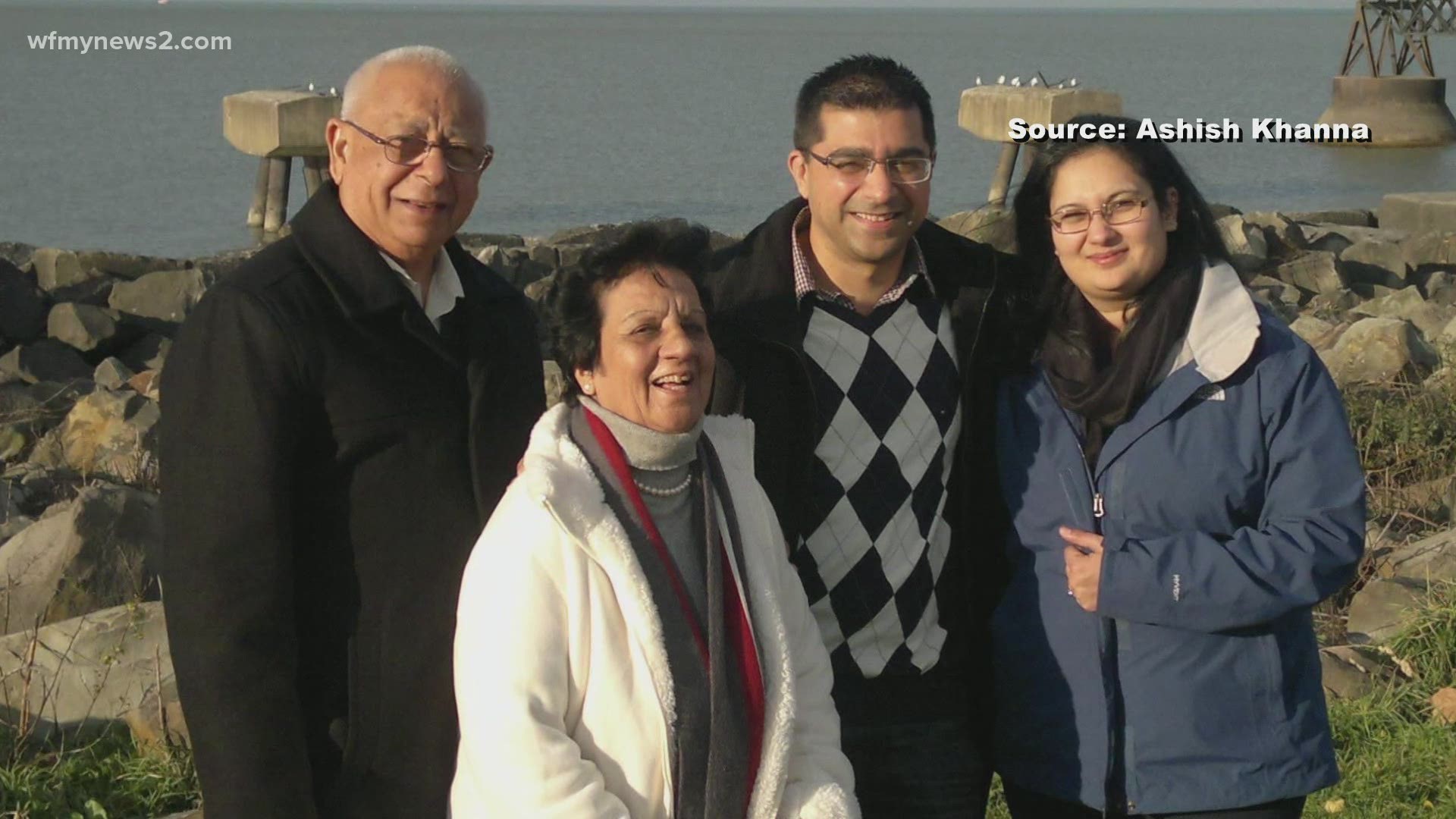 Constantly being around people with the virus prompted him to be extra cautious when going home to his family. Dr. Khanna said he'd isolate himself away from his wife and children to keep them safe from the virus.

With the job, also comes the understanding of what patients battling COVID-19 in the ICU go through. So, when Dr. Khanna's parents tested positive for the virus at their home in India back in April, he feared the worst.

"They looked OK but they were like you know we got some fever and my heart sank," he said, "As soon as I heard the word fever I knew that something wasn’t right."

"Knowing what I had seen in the same age group I had here, I had visions of escalating oxygen, more oxygen, needing to come to the hospital, the ICU the ventilator," said Dr. Khanna, "and suddenly it hits you. It hits you that, 'Hey, you know, I could suddenly lose both of my parents within a week or two weeks."

His mother is 75-years-old. Dr. Khanna said he had been in touch with fellow medical experts over in India who were taking care of his parents. They advised him with the limited resources the country had at the time, it was best his family stay at their home for care.

RELATED: A Triad doctor and nurse reflect on the past year - and share thoughts about the future

"His best chance is that he and your mom stay at home, arrange oxygen for yourself at home, and hope you don’t have to come to the hospital because if you do we don’t know what the outcome will be," Dr. Khanna said he was told by a friend who worked overseas.

Dr. Khanna said once he learned his mother went on oxygen at her home, he tried to board the next flight to India. While he was sitting at his gate to board his plane, his airline announced they would be suspending service to India indefinitely.

"I'm driving back from Raleigh airport. I call my dad and I’m like, 'Listen I want to be with you guys but now I cannot,'" Dr. Khanna said, "He said, 'Just hold on I know you're very emotional right now, you want to be with us but just do the right thing and well take this one day at a time.'"

"You take care of hundreds of thousands of patients right. You sort of detach yourself on the emotional front. You treat a disease like a disease and as a doctor, you say, 'OK this patient is COVID positive and I'm going to try and help them, but suddenly it's your parents and you're sitting halfway across the planet," Dr. Khanna said.

His mother and father have both recovered from COVID-19, but Khanna said the virus has had long-lasting impacts on his mother's brain.

He said she gradually came off oxygen, and they continue their video calls every day, which has turned into every few hours sometimes, according to Khanna.

One thing he attributes to the ability to still be able to do those video calls to this day - the vaccine.

"If there’s one reason my parents are alive today it's because of the vaccine," he said.

Khanna said his parents got the first dose of the shot just weeks before testing positive.

"I would say this, based on all the patients that I've treated and now my own parents: vaccinations save lives," he said.

Dr. Khanna is still working in the ICU, taking care of patients with COVID-19. While the outside of hospital walls seem to have improved in terms of a return to normalcy, inside the ICU has not.

"I was on service last week and people have died. I have been witness to a family of four of which one of the children has died, one has recovered and the parents are still in the ICU – both of them," said Khanna.

Khanna said there is still no magic cure, no magic treatment once someone gets COVID-19 that will help doctors make it just go away.

"I still stand helpless by a patient's bedside and watch them dwindle away," he said.

To date, Khanna said he has not taken care of one vaccinated patient in the ICU.

RELATED: Second round of HOPE program checks going out in North Carolina to help with COVID relief efforts