The San Diego County Sheriff's Department announced that it was investigating the episode, even though deputies were not called in at the time of the incident. 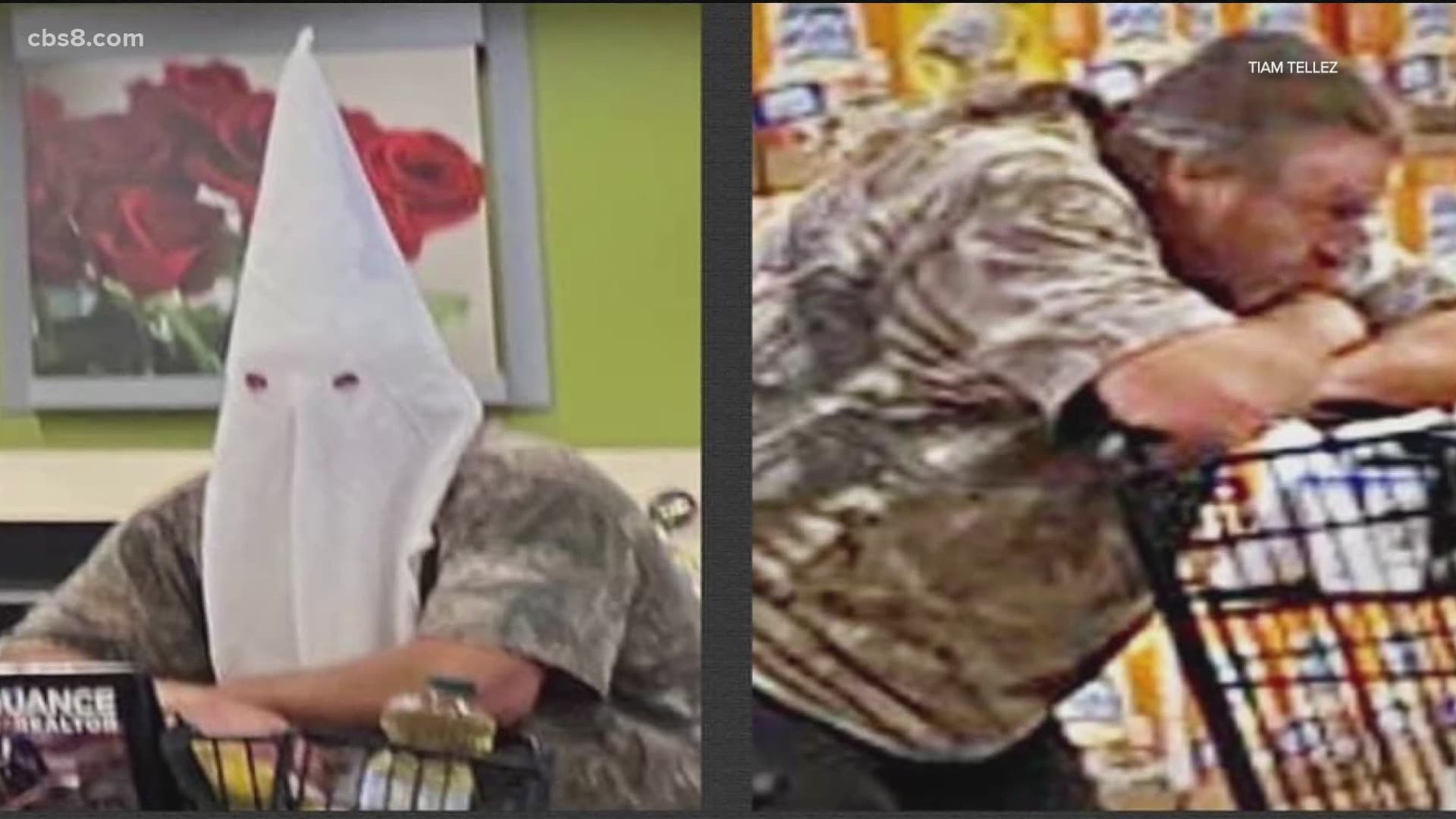 SANTEE, Calif. — WARNING: This story contains graphic images that some may find disturbing.

Update Tuesday, May 5 at 4 p.m.: The San Diego Sheriff's Department said it continues to investigate the incident of a man photographed in a KKK hood in a grocery store in East County San Diego.

Detectives have identified the man and will continue their follow-up, according to the department.

An investigation was underway Monday into whether the appearance of a customer wearing a Ku Klux Klan-style hood at an eastern San Diego County supermarket amounted to a criminal act.

A disturbing post, showing the man wearing a KKK hood while grocery shopping at Vons, has been circulating on social media. The photos were taken at the store on Mission Gorge Road in Santee Saturday afternoon.

The photos have drawn outrage from local leaders and civil-rights organizations that condemned the display of a key symbol of a racist hate group.

In a prepared statement (seen below), the San Diego County Sheriff's Department announced that it was investigating the episode, even though deputies were not called in while it was happening.

"I think he's a fool, I think he's inciting problems in the store, he's looking for a fight," said shopper Colleen Williamson.

The San Diego Anti-Defamation League says hate cases are on the rise.

"What history shows us, when there's a crisis people look for a scapegoat," said Regional Director Tammy Gilles.

Employees at the store repeatedly asked the unidentified man to remove the pointed white hood, and he finally did so while he was standing in a cashier's line, according to Melissa Hill, a representative for Vons and Albertsons stores in Southern California.

Hill provided News 8 with the following statement on the matter:

"Unfortunately, an alarming and isolated incident occurred at our Vons store in Santee, where a customer chose an inflammatory method of wearing a face covering. Needless to say, it was shocking. Several members of our team asked the customer to remove it, and all requests were ignored until the customer was in the checkout area. This was a disturbing incident for our associates and customers, and we are reviewing with our team how to best handle such inappropriate situations in the future."

"The images I've seen are abhorrent this blatant racism has no place in Santee or any part of San Diego County. It is not who we are. It is not what we stand for and can't be tolerated."

"There was an incident in Santee on Saturday where citizens photographed a male wearing attire that depicted a symbol of hatred.  The citizens and Vons employees took steps to address the situation.  Many thanks to all who stepped forward to curtail this sad reminder of intolerance. Santee, its leaders, and I will not tolerate such behavior.  Santee and its citizens are great, and this particular individual's actions are not representative of us as a people and a wonderful city."

"The San Diego County Sheriff's Department has been made aware of an incident involving a man wearing a white Ku Klux Klan hood at a grocery store in Santee on Saturday, May 2nd. Deputies were not called to the scene at the time the incident took place. Detectives from the Sheriff's Department are looking into the matter and will pursue any appropriate criminal charges. The Sheriff's Department does not condone hate or any acts of intolerance in our communities. We are a county that is welcoming of people from all backgrounds. Anyone with information on this incident can contact Sergeant Claudia Delgado at (619) 956-4050."