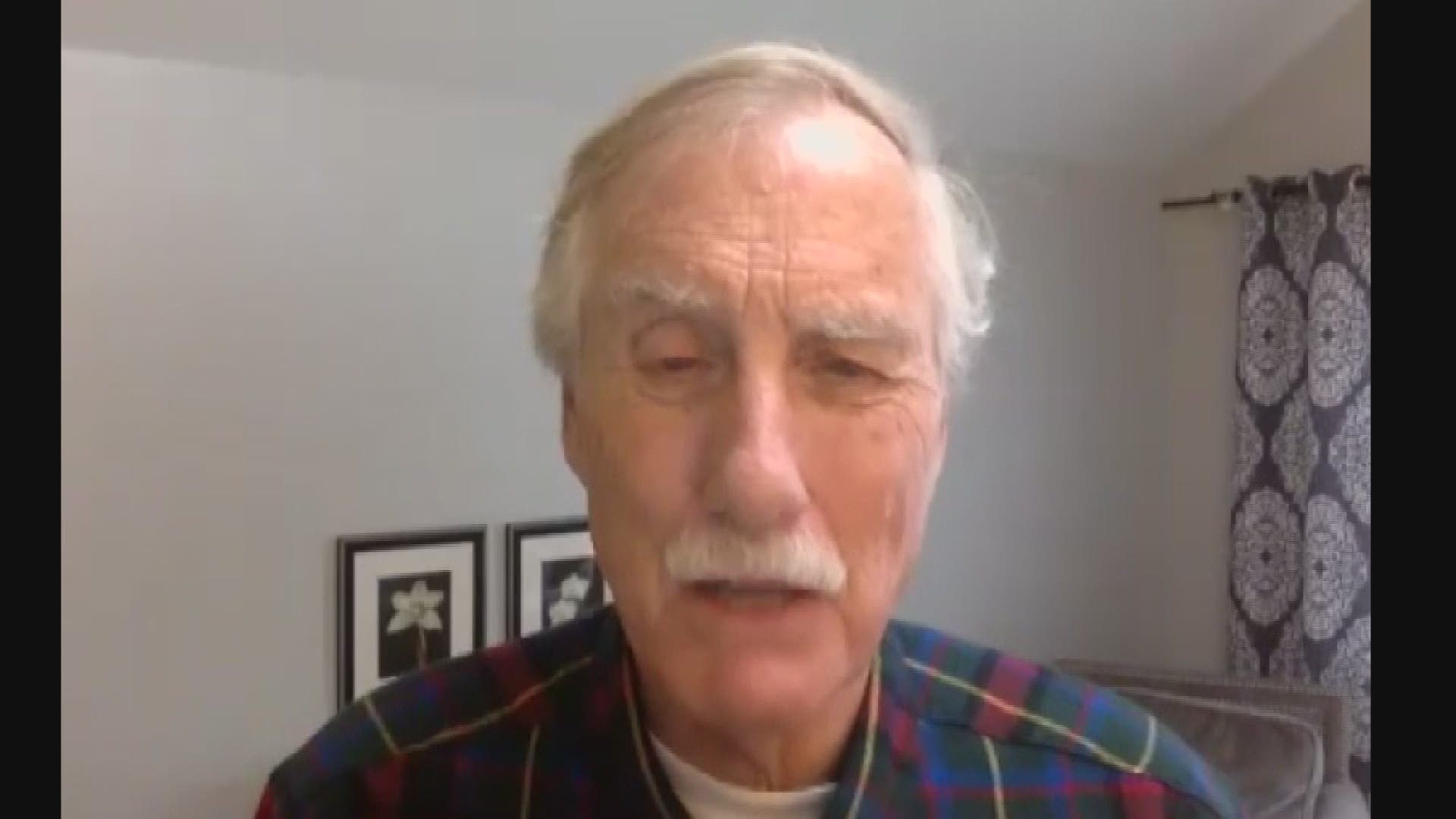 PORTLAND, Maine — Amid a worldwide shortage of the personal protective equipment used by medical staff while treating victims of the coronavirus pandemic, Maine Sen. Angus King said Thursday he’s not confident his state is as prepared as it could be for the virus to peak -- and he suspects politics is among the reasons.

Since returning to Maine from Washington, D.C., a week ago, King’s days have been filled with online meetings and phone calls with state leaders, hospital administration and the Pentagon.

He said he's thrilled -- but not surprised -- that so many Maine companies have shifted gears to begin manufacturing the personal protective equipment (PPE) so sorely lacking in Maine and around the world.

The senator praised Maine Gov. Janet Mills and Maine CDC Director Nirav Shah for their leadership and for being "calm, forthright and factual."

But he said Maine wouldn't be scrambling to obtain necessary supplies to fight COVID-19 if the federal government had better managed the national stockpile of supplies and the distribution of those supplies to states.

On Friday, the Washington Post reported that Maine had received about five percent of the PPE it had requested, although other states such as Florida received far larger percentages.

Asked Thursday if he is confident Maine is as prepared as it could be, King responded, “No I’m not, in part because of what I consider a failure from the federal government to, number 1, anticipate this problem, and number 2, to get the equipment out to the places where it’s needed.”

King said he worries that politics played a role in determining which states received adequate supplies from the national stockpile.

"Here’s what’s really bothering me," he said. "There are indications that some of the allocations of these things – and I say indications … this is a worry, not a straight up accusation -- that there’s some politics in this, in the way things are being distributed. The president has said, ‘Well I don’t like that governor because they said something nasty about me and we’ll see if I return their phone call.’ That’s very worrisome. I think we have an obligation to be sure that’s not the case. If there was ever a time politics shouldn’t play a role, this is it."

Asked about a Washington Post report Thursday that the national stockpile is almost depleted, King said Maine's recourse "is to make it ourselves, which we're already doing." In addition, he said the state must "tap into private companies" for supplies, and utilize resources overseas.

King spoke of a plane chartered by New England Patriots owner Robert Kraft, which was due to land at Logan Airport in Boston on Thursday with what King said were 1 million masks for healthcare workers.

He said L.L. Bean is working with its suppliers in Asia to obtain additional equipment.

"We've got to be doing the things that Maine people do, which is invent and create and figure out how to work these things out," he said.

King said he has not been given specific estimates of the toll the coronavirus may take in Maine, but he said he suspects it will be far less than elsewhere.

During his daily briefing Thursday, Shah also declined to offer projections of the number of cases or deaths Maine is likely to see, saying instead, "Whatever the death toll may be, it will be far too high for all of us to bear."

On Wednesday, the president said the country could see 100,000 to 240,000 deaths with mitigation efforts, and 1.5 million to 2.2 million without those measures.

King said Mills' "aggressive" actions regarding social distancing are having an effect, but the state has already seen a sign of what is likely to come.

He said he had a long phone conversation Wednesday with Shah, who he called "the real star" and "just the right person in this job."

"We certainly won't be unscathed," he said. "We've already had deaths and the number of cases will continue to go up. But I think if we can stick to what the governor has proposed and ordered, I think we're going to come out of this a lot better than a lot of other places."

King, who returned from Washington, D.C., last week, continues to self-quarantine at an inn near his Brunswick home. He said he hopes others arriving in the state will do the same.

He urged Mainers to follow guidelines and "flatten the curve."

"If I had to pick a place in the country to be right now, it would be the state of Maine," he said. "Number 1, because we have strong leadership in Augusta. Number 2, because we have a tradition of taking care of one another and looking out for one another. Number 3, we have a tradition of being civically reponsible. All you've gotta do is walk out -- not walk out, but look out your window and see people are staying in their houses and staying off the streets."

RELATED: Dr. Fauci's face will soon be on a bobblehead