For many Maine hotels, the road back from coronavirus shutdown has been rough, and business very slow. 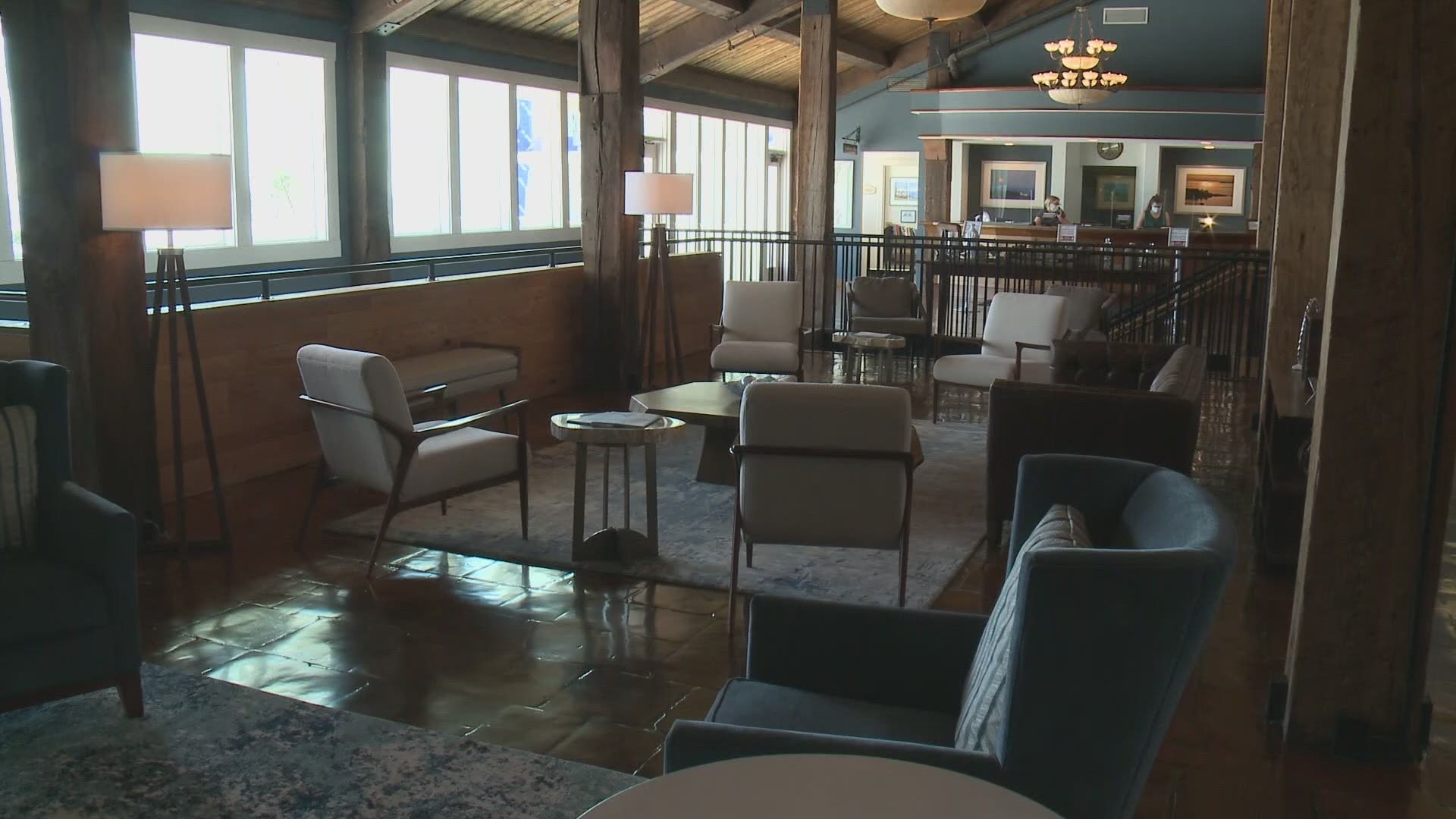 ROCKPORT, Maine — The sprawling Samoset Resort sparkled in the sun of a near-perfect June day. The golf course and lawns a rich green, flowers and shrubs growing and blooming. Inside, the polished wood floor made from slices of old timbers gleamed.

But there were almost no guests to enjoy it.

Like many Maine hotels, the road back from coronavirus shutdown has been rough, and business very slow.

Longtime General Manager Connie Russell said June is typically a very busy month for conferences and meetings that fill the hotel in the month before the big tourist surge.

But not this year.

Conferences and meetings have been cancelled through August, he says, and the hotel is waiting to find out of any fall events will take place.

But the biggest hit to the Samoset and other Maine hotels is coming from the current state restrictions on travel from other states. Maine still requires tourists from other states to self quarantine for 14 days when they get to Maine, or get a COVID 19 test in their home state no more than 72 hours before they arrive.

It’s a burden and requirement the resort’s owner says most tourists aren’t willing to bear.

"We get cancellations because people aren’t willing to go through all that, because they can go other places without having that burden, and the cost,” said Mark Walsh, vice president of the family owned Ocean Properties, which owns the Samoset, 13 other hotels in Maine and 125 in North America.

Walsh was raised in Brewer and now works out of the Ocean Properties headquarters in Florida, but he spends part of each year in Bar Harbor, where the company owns three hotels.

Walsh says the company hired a consultant that has done pandemic-related work for the Pentagon to analyze Maine’s situation and the quarantine requirement. He says the consultants determined the state’s plan doesn’t do what Governor Janet Mills' administration wants.

“Out experts (concluded) that it really doesn’t work, Because you can take a test 72 hours before you come to Maine and then be infected after the test and arrive in Maine,” Walsh told NEWS CENTER Maine. “The issue isn’t should we test. the issue is where to we test. who do we test and what’s the safest way to do that? I can’t find any state that thinks testing tourists is practical or effective.”

Walsh says he presented a different plan to the Mills administration; one that requires strict standards of hotels for cleanliness, careful communication with guests and constant monitoring of the staff, including daily health screenings.

He says that of the company’s nine hotels open in Maine through the pandemic months, none had a positive case.

Walsh said he had the chance to meet and talk with leaders of the Mills administration about his plan and the problems the governor’s quarantine order poses for the hotel industry, but that it did not change the final decision.

Kate Foye, spokeswoman for Maine Economic Development Commissioner Heather Johnson, says the administration continues to believe the quarantine requirement, with the option for testing, is currently the best way to safeguard Mainers from new cases of the virus. Foye said they continue to monitor activity and science in other states on a daily basis, understand the problem it poses for the tourism industry, and are hopeful an alternative can be found.

At the Samoset, Connie Russell says potential guests are making decisions not to come because of the quarantine and testing..

“We are receiving record call volume,” he said, noting many callers with and without reservations say they don’t understand the state’s requirements.

“Some want to make reservation, some have reservations are cancelling. You can tell there is anxiousness to come to Maine but at the end of the call they’re not booking,” he added.

Russell said the hotel was at just 16 percent occupancy Monday night, while in a normal June it would be 70 percent occupied, if not higher.

That sparse business is also having a direct impact on the local economy.

Russell said that last year at this time, the Samoset had 300 people working, many of them local. This year, he said, is a fraction of that.

Mark Walsh said the company’s three Bar Harbor hotels employed 650 people last June, but as of right now, have just 45 on the payroll.

RELATED: Gym installs air purification system in hopes it will prove to be a game-changer