Students worry about having to leave the country if UMaine or other universities switch to online-only this fall. 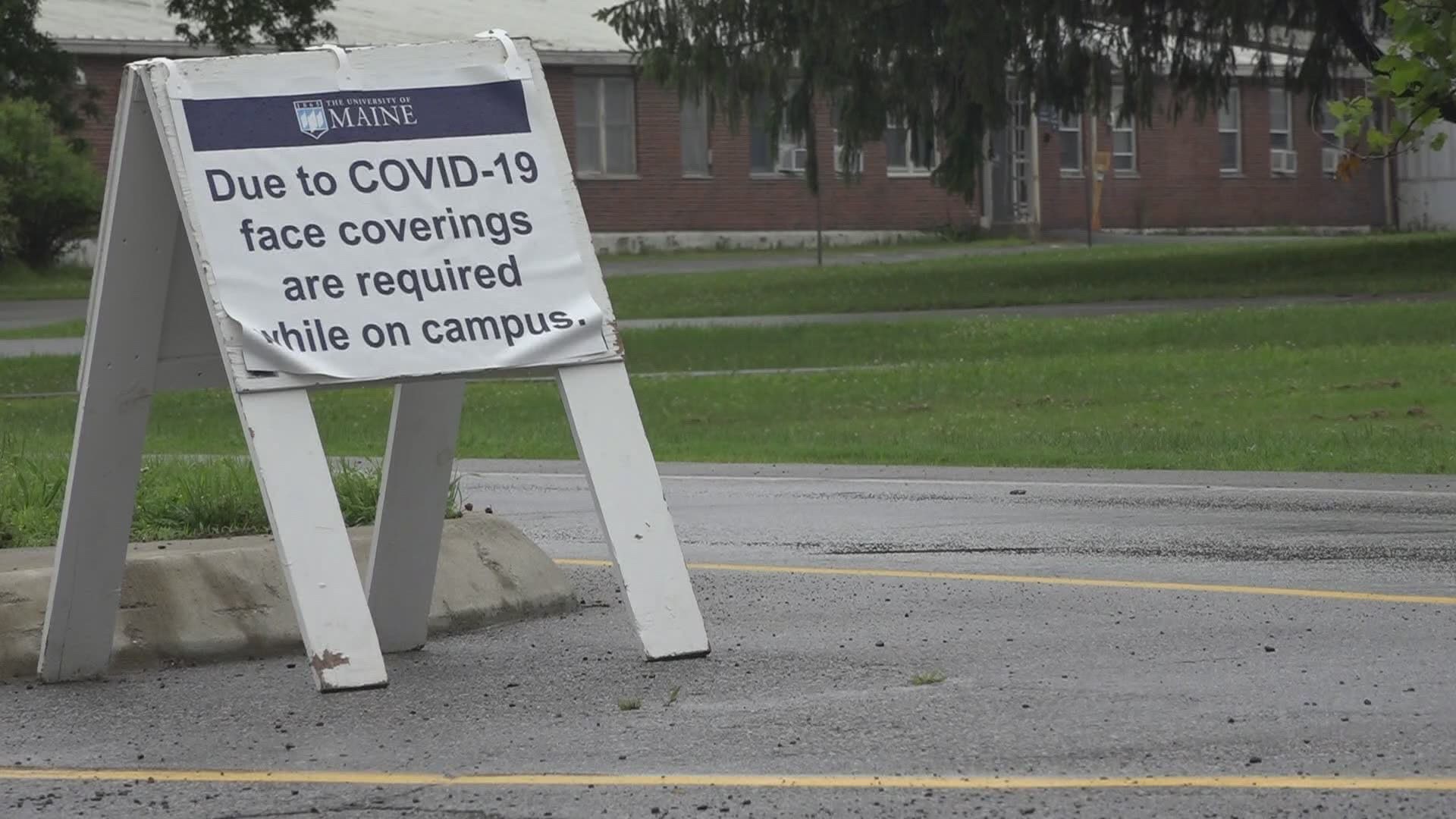 ORONO, Maine — Henry Amponsah is originally from Ghana and Zarni Chanapatdaychaporn from Thailand, they are just two of more than 500 international students that are currently enrolled at the University of Maine. Both with F-1 student visas.

This year has already been very challenging for most people due to the ongoing COVID-19 coronavirus pandemic, but now international students living in the United States have another reason to worry.

Immigration and Customs Enforcement, or ICE, recently announced new rules that say international students in the US will have their visas invalidated and will be forced to leave the country if they only take online classes this upcoming fall semester. This applies to nonimmigrant F-1 and M-1 visas.

UMaine in Orono has international students from 80 countries enrolled.

Faye Gilbert is the interim provost and dean of the Undergraduate School of Business in the Maine Business School at UMaine.

"They are an important part of who we are," says Gilbert.

"They bring a sense of culture for each other and for the rest of our students," says Gilbert.

New guidelines by @ICEgov for this upcoming fall semester say that international students “may not take a full online course load and remain in the United States.” I spoke with 2 @UMaine int'l students that are feeling anxious and uncertain about what's next. #NEWSCENTERmaine pic.twitter.com/RgUyUt1WsX

Weeks before the start of the fall semester a new guideline for international students was released by ICE.

"Requiring international students to be enrolled on in-person or hybrid classes, and for students who's institutions are fully online, they have to depart the country," says Orlina Betova, the Director of International Programs at UMaine.

"I'm really really worried because if Thailand closes the border again, how am I going to travel back to Thailand?" says Chanapatdaychaporn.

Luckily, UMaine will be following a hybrid model this fall semester, which is a mix of in-person classes with some online components too. This will satisfy the new regulations by ICE.

"We will be switching to a remote instruction on November 25th, but because its part of our hybrid instructional model for the fall semester, our students can remain in the country and complete their semester," says Betova.

UMaine has decided to switch to fully online starting on November 25th. The completion of courses fully online after Nov. 25 fits within the hybrid model and will allow international students to remain in the U.S. for continued studies.

Students like Henry and Zarni are concerned and worried about their uncertain future.

"I just feel that probably that will be the end of my program," says Amponsah.

"So that uncertainty you can imagine is not a comfortable way to live, or to focus on your studies and what you are learning because the worry of is it today, is it tomorrow that I have to have all my things in a suitcase ready to depart the country?" says Gilbert.

"Since we pay full-tuition, it's really a lot of money!" says Chanapatdaychaporn.

International students pay out-of-state fees. Chanapatdaychaporn asks NEWS CENTER Maine that if UMaine closes in the fall because of a spike in cases what will happen to his tuition? Another concern... if UMaine or other universities close in the middle of the semester, all international students would have to pack their bags and leave since ICE has made it very clear that the only way they can remain in the US is if they take in-person courses.

UMaine in Orono currently has about 500 international students enrolled.
The school is expecting about 300 to stay or come this fall and take at least one in-person class to satisfy the new ICE regulations.

"New international students admitted for Fall 2020 remain unable to secure a US student visa due to US consulates abroad not processing student visas. Some students also face travel restrictions - the US is not allowing individuals who have spent the last 14 days in the European Union, China, UK, Ireland, Iran and Brazil to enter the US," says Betova.

University of Maine Women's Basketball Coach Amy Vachon took to twitter to voice her concerns about her students.

"There have been a lot of tough things about this pandemic. 1 of the hardest for me right now is not being able to help my international players return or come to Maine - a place that’s their 2nd home," said Vachon in the tweet.

There have been a lot of tough things about this pandemic. 1 of the hardest for me right now is not being able to help my international players return or come to Maine - a place that’s their 2nd home. Also supporting them through the “threat of deportation” This is not right.

UMaine officials tell NEWS CENTER Maine the Office of International Programs will work with students to make sure they are enrolled in the appropriate mix of online and in-person courses to remain compliant with immigration requirements.

There are also guidelines for students who left at the beginning of the pandemic and plan to remain in their home countries for the rest of the year. UMaine officials tell NEWS CENTER Maine they can take all online coursework and still be part of the UMaine system.

"Enrollment in online courses, full time or part-time, is permitted under the guidelines as long as the student is outside the U.S.," says Betova.

UMaine wants to remind students that they are there for them and they will do everything in their reach to help them feel safe and welcome.

"We know that this is a stressful time for everyone. We are pleased that those who want to begin or continue their studies in Maine will be allowed to under the current guidance," says Betova.

Many Maine state leaders have addressed their concerns about this new guidance.

Congresswoman Chellie Pingree asked DHS and ICE to clarify and reconsider the modification, which would cause undue harm to international students during the coronavirus pandemic.

“Because ICE failed to provide any justification for its guidance, it is unclear what problems these new rules are designed to solve. It is obvious, however, that the guidance will impede attempts by colleges and universities to respond effectively to the COVID-19 pandemic, thus endangering the health of students, teaching assistants, professors, and others,” says Chellie Pingree along with 136 other lawmakers in a letter to Acting Secretary of the Department of Homeland Security (DHS) Chad Wolf and Acting Director of U.S. Immigration and Customs Enforcement (ICE) Matthew Albence.

“Many schools have yet to determine whether they will hold in-person, online, or hybrid classes this fall, and most plan to make that determination based on guidance from States and health experts monitoring the COVID-19 health crisis. Students at these schools are currently in limbo, and they do not know whether they will be able to stay or be forced to leave, making planning for the upcoming semester impossible. This rule could force schools to rush the finalization of their plans or encourage them to reopen prematurely and put more students, staff, and faculty at risk to prevent international student deportation. These decisions should be made based on the safety of students and faculty and should not be influenced by rash immigration policy objectives or with the sole goal of going back to business as usual,” stated the lawmakers in the letter.

According to the State Department, there are nearly 400,000 holders of F visas and nearly 10,000 holders of M visas in the United States, who would be affected by this policy change.

Senator Angus King also wrote a letter urging the Acting Secretary of Homeland Security Chad Wolf to allow students to remain in the US to learn.

“While I share the goal of resuming in-person instruction at our colleges and universities, the increase of cases of COVID-19 throughout the country is cause for concern,” wrote Senator King. “There have been spikes in the South and West, and experts including Dr. Fauci have predicted a second wave of cases in the fall. Therefore, it is important that we allow schools the flexibility they need for their students to learn.

“I know you have many decisions to make as you release guidance and regulations that are in the best interest of students, faculty, and staff. It is clear that schools are making their decisions for the same reasons. That is why I urge you to consider allowing an extension of waivers during the fall semester," added Sen. King.

A new visa rule would jeopardize the education of nearly one million international students and harm hundreds of colleges and universities, including in Maine. This policy must be rescinded to allow students to retain their visas if they attend classes online due to COVID-19. pic.twitter.com/vGwxA1yvzh

“[The March 13th] exemption worked and ought to be extended.  Its termination on short-notice is especially troubling given that the Student and Exchange Visitor Program’s (SEVP) new guidance requires colleges and universities to certify by July 15 – just one week from now – whether or not fall semester courses will be offered online only, in-person only, or using a hybrid model,” wrote Senator Collins.  “Allowing these students to take courses online, if that option is available to them, would tend to slow the spread of COVID-19, whereas the SEVP’s new guidance could have the opposite effect.”

“SEVP’s new guidance not only puts the education of one million foreign students at risk, but also the reputation of hundreds of institutions of higher education around our country, including many in Maine, such as Bowdoin, Bates, and Colby colleges, as well as the University of Maine system,” Senator Collins wrote.  “I fear that the arbitrary and capricious SEVP guidance will cause real, deep, and long-lasting harm to these institutions and to our nation’s interests.”

Many, like Coach Vachon, think the messages to international students are mixed, at best.

"Also supporting them through the 'threat of deportation.' This is not right."