Mainers swarmed outside the Augusta State House and Blaine House Saturday afternoon to urge the Governor to ease up on coronavirus restrictions. 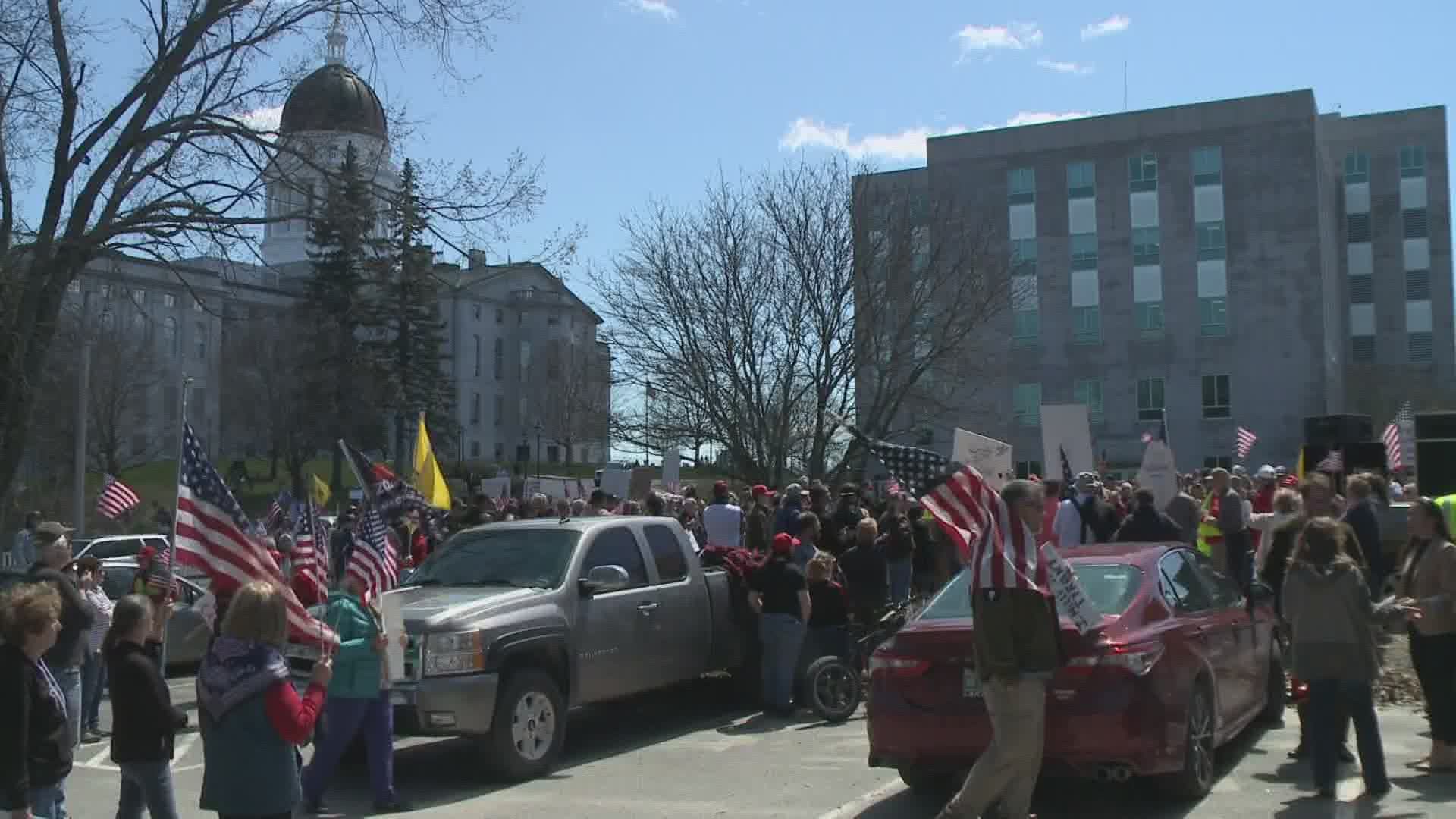 AUGUSTA, Maine — Protesters took the streets of Augusta Saturday afternoon once again, urging Maine Governor Janet Mills to ease up on her restrictions amid the current COVID-19 health crisis.

With a far bigger crowd than a similar protest held there last week, the group again hoped to gain the attention of the Governor, who hasn't commented on the protests thus far.

The protests come after Mills' staged approach to reopen the state's economy took effect on Friday, entering the first of four phases. Under Phase 1 of her plan, some personal service businesses, including barbershops and hair salons, drive-in services, outdoor recreation, auto dealerships and car washes, as well as health care from Maine-licensed providers.

In order to reopen, these businesses must follow strict safety precautions and pass certain guidelines.

"People have to go back to work, the fix is worst than the disease, and Gov. Mills is clearly not listening to the people of Maine," Sleeper Steven of Bangor said.

"The lockdown was supposed to be to flatten the curve, but Maine never had a curve to flatten," Bob Manchester of Turner said.

The coronavirus pandemic has wreaked havoc on the state economy, and many businesses are frustrated with Mills' plan. Critics claim the Governor’s plan will damage Maine’s economy because it takes far too long to reopen businesses. The plan is particularly worrisome to many tourist businesses.

Republican candidate for U.S. Congress Adrienne Bennett of Troy spoke at the protest on Saturday.

"There is no fear here, the only fear is that the government is going to take our constitutional rights away from us," Bennett said.

"To think that people are going to suffer all across the country, that's not fair," Noah Hall of Bangor said.

"I think you need to listen to your constituents governor mills, they are overwhelmingly opposed to the plan you have presented to shut down Maines tourist season and bankrupt our state," Guerin said.

“I have people frightened to death [that] their life and livelihoods will be gone,” State Senator Robert Foley (R-Wells) said.

Some businesses have defied the Governor's orders and reopened to the public.

One of those business owners was Rick Savage, owner of Sunday River Brewing Co. in Bethel. Savage was at the protest on Saturday, shaking hands with those who recognized him for his efforts on Friday that caused a stir in the local and mainstream media.

After defying the order, Savage's health and liquor licenses were revoked by the state. Despite saying he would remain open, he later said he would close his restaurant again until further notice.

Savage's attention-grabbing efforts on Friday started a trend among other Maine businesses who are also frustrated with Mills' plan and struggling amid the crisis.

Although Mills has not directly commented on the protests, she addressed the frustrations live at the daily Maine CDC coronavirus briefing on Friday as the first phase of her plan took effect.