About a dozen states have COVID-19 vaccination mandates covering health care workers in hospitals, long-term care facilities or both. 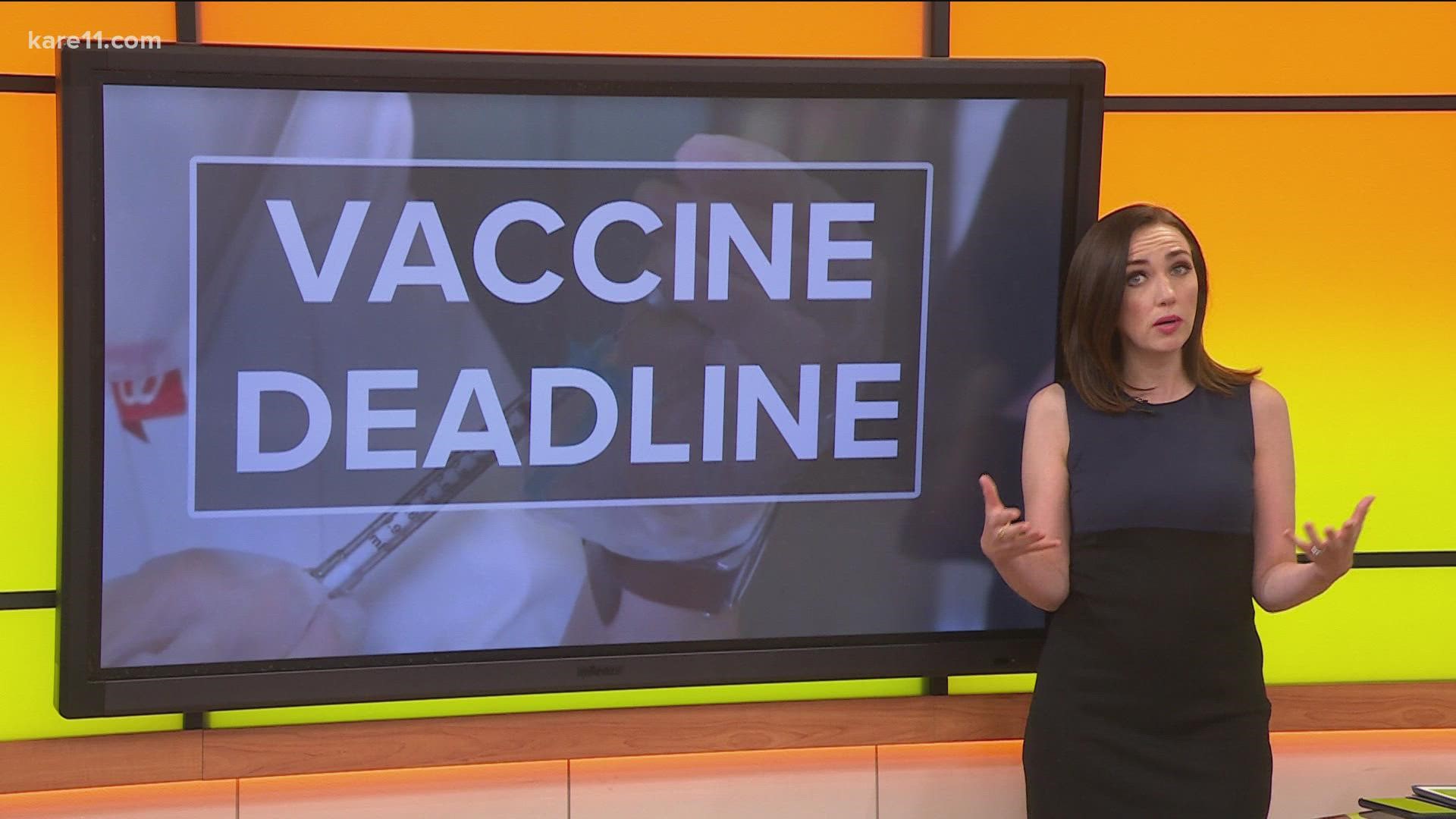 Hospitals and nursing homes around the country are bracing for worsening staff shortages as state deadlines arrive for health care workers to get vaccinated against COVID-19.

With ultimatums taking effect this week in states like New York, California, Rhode Island and Connecticut, the fear is that some employees will quit or let themselves be fired or suspended rather than get the vaccine.

“How this is going to play out, we don’t know. We are concerned about how it will exacerbate an already quite serious staffing problem,” said California Hospital Association spokesperson Jan Emerson-Shea, adding that the organization “absolutely” supports the state's vaccination requirement.

New York health care employees had until the end of the day Monday to get at least one dose, but some hospitals had already begun suspending or otherwise taking action against holdouts.

Erie County Medical Center Corp. in Buffalo said about 5% of its hospital workforce has been put on unpaid leave for not being vaccinated, along with 20% of staff at its nursing home. And the state’s largest health care provider, Northwell Health, said it has begun removing unvaccinated workers from its system, though it said its workforce is nearly 100% vaccinated.

“To those who have not yet made that decision, please do the right thing,” New York Gov. Kathy Hochul said.

Some New York hospitals prepared contingency plans that included cutting back on noncritical services and limiting nursing home admissions. The governor also drew up plans to summon help from National Guard members with medical training, retirees or vaccinated workers from outside the state.

About a dozen states have vaccination mandates covering health care workers in hospitals, long-term care facilities or both. Some allow exemptions on medical or religious grounds, but those employees often must submit to regular COVID-19 testing.

States that have set such requirements tend to have high vaccination rates already. The highest rates are concentrated in the Northeast, the lowest ones in the South and Midwest.

The Biden administration also will require the roughly 17 million workers at health facilities that receive federal Medicare or Medicaid to be fully vaccinated under a rule still being developed.

That has worried some hospital officials, particularly in rural communities where vaccination rates tend to be lower.

“We are looking at the need to reallocate staff, in some cases just to maintain services that are essential, and there are going to be some delays" in care, said Troy Bruntz, president and CEO at Community Hospital in McCook, Nebraska.

He said 25 of the hospital’s 330 employees said they would definitely resign if they were required to be vaccinated. The remainder of the approximately 100 unvaccinated employees — a group that includes nurses as well as cleaning and maintenance staff — haven’t decided.

He also worries that it will be difficult to hire new workers when the hospital is already short-handed.

“It doesn’t make us feel too confident that this isn’t going to turn into something short of a nightmare for American health care,” he said.

Many hospitals and nursing homes are already suffering staff shortages because many nurses and others have quit as a result of pandemic-related burnout or have left for lucrative jobs traveling from state to state.

In California, where health care workers have until Thursday to get fully vaccinated, some hospitals are anticipating firings, suspensions or the moving of people to other positions, Emerson-Shea said. She said many traveling nurses have declined assignments in California because of the state's vaccine requirement.

In Rhode Island, where the vaccine mandate takes effect Friday, the state said hospitals can allow unvaccinated employees to keep working 30 days past the deadline in cases where firing them would compromise patient safety. The mandate is being challenged in court because it doesn't allow religious exemptions.

In states that don’t have mandates, some hospitals are imposing their own.

Ginger Robertson, a registered nurse who works in a mental health clinic at a hospital in Bismarck, North Dakota, has requested a religious exemption from her hospital’s vaccination requirement. She said she will look for other work if she doesn’t get it.

She said other nurses are also considering leaving over what she called the “insulting” mandate.

“We feel demoralized, like as though we aren’t intelligent enough to make these choices for ourselves,” Robertson said.

In Connecticut, a vaccine mandate for employees of state-run hospitals took effect on Monday. It does not apply to privately run hospitals, some of which are imposing their own requirements. Medical and religious exemptions are possible, but anyone else who fails to get vaccinated will be barred from the workplace.

“I feel good, very good about our ability to have the staffing we need in the public hospitals,” said Mitchell Katz, head of the city’s public hospital system.

In Missouri, which became a severe COVID-19 hot spot over the summer, the Mercy hospital system is requiring vaccinations among staff at its hundreds of medical centers and clinics in Missouri and neighboring states by Thursday.

Anyone who doesn't comply by then will be placed on a 30-day unpaid suspension, said Mercy spokeswoman Bethany Pope.

Webber reported from Fenton, Michigan, and Hollingsworth from Mission, Kansas. Philip Marcelo and Mark Pratt in Boston; Michael Melia in Hartford, Connecticut; and Michael Hill in Albany, New York, contributed to this story.