He was hospitalized last month after testing positive for COVID-19 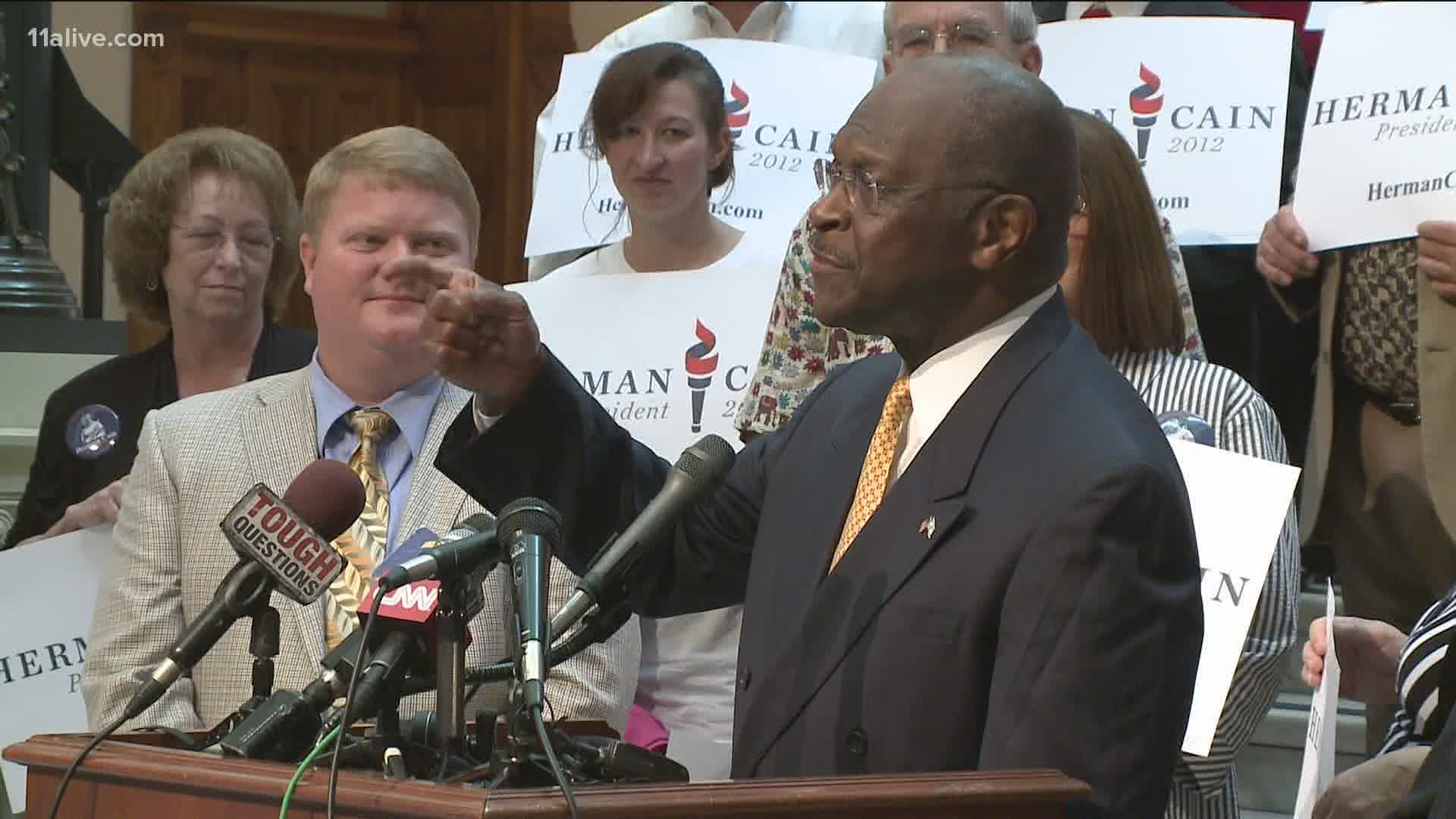 ATLANTA — Former Republican presidential candidate Herman Cain died Thursday, his website announced. He was hospitalized last month after testing positive for COVID-19 and recently had complications. He was 74.

Cain, who ran for President of the United States in 2012, grew up in Georgia and graduated from Morehouse College with a bachelor's degree in mathematics.

On Monday, his Twitter account announced was was still in the hospital being treated with oxygen for his lungs. Thursday, they announced his passing.

His website said when he was first hospitalized they knew it was going to be a "rough fight" after he had trouble breathing and that he was "in for a battle."

Cain attended a highly-publicized rally for President Donald Trump in Tulsa on June 20. It was the first large-gathering event the president put on since the pandemic. Many were seen not wearing masks at the event. Cain tested positive for the virus on June 29 and was hospitalized on July 2.

Cain was considered a high-risk because of his history with cancer. In 2006, he was diagnosed with stage IV colon cancer. Doctors found a tumor in his liver, a common location for the cancer to spread, Cain wrote in a book.

"Herman Cain – our boss, our friend, like a father to so many of us – has passed away. He’s entering the presence of the Savior he’s served as an associate minister at Antioch Baptist Church in Atlanta for, and preparing for his reward," a message from Dan Calabrese said on his website.

Calabrese said just five days ago doctors thought he would recover, but it wouldn't be quick. They said they "felt real concern about the fact that he never quite seemed to get to the point where the doctors could advance him to the recovery phase."

President Trump took to Twitter Thursday afternoon and said he spoke to Cain's wife and family and offered them his condolences.

My friend Herman Cain, a Powerful Voice of Freedom and all that is good, passed away this morning. Herman had an incredible career and was adored by everyone that ever met him, especially me. He was a very special man, an American Patriot, and great friend. I just got off...

Georgia Gov. Brian Kemp also took to Twitter to offer his condolences. He said Cain⁩ "was an unwavering patriot, a conservative stalwart & a deeply wise, thoughtful man who lived the American Dream. He was truly one of a kind & his loss is devastating to many, including our family. Please pray for his loved ones, friends & colleagues."

Sen. David Perdue said he was devastated to learn of the passing of one of his closest friends.

Bonnie and I are devastated to learn of the passing of one of our closest friends, Herman Cain. pic.twitter.com/9DFbX69jqJ

In a statement, president of Morehouse College, David A. Thomas, wrote that the Morehouse community was "deeply saddened" over Cain's death.

“He was a philanthropist, a successful business executive, a political activist, a media personality, a caring father, and a son of Morehouse who graduated in 1967. Our hearts and prayers are with the Cain family,” Thomas said.

According to his website, Cain just started hosting a new show on Newsmax TV. This came after he "walked away" as a contributor with FOX News to head a Super PAC.

Cain began his business career climbing the corporate ladder at Pillsbury and then Burger King. He was most known to many as CEO of Godfather's Pizza.

Late Thursday, on Twitter, his account posted a message thanking those for their support and information on where to make a donation in his name.

"Obviously, we appreciate and thank you all for the outpouring of support but, in lieu of flowers, Herman's family requests donations to:

In memory of HC”