The president of Hannaford tells NEWS CENTER Maine the company is preparing for a 'new reality' that could last months. 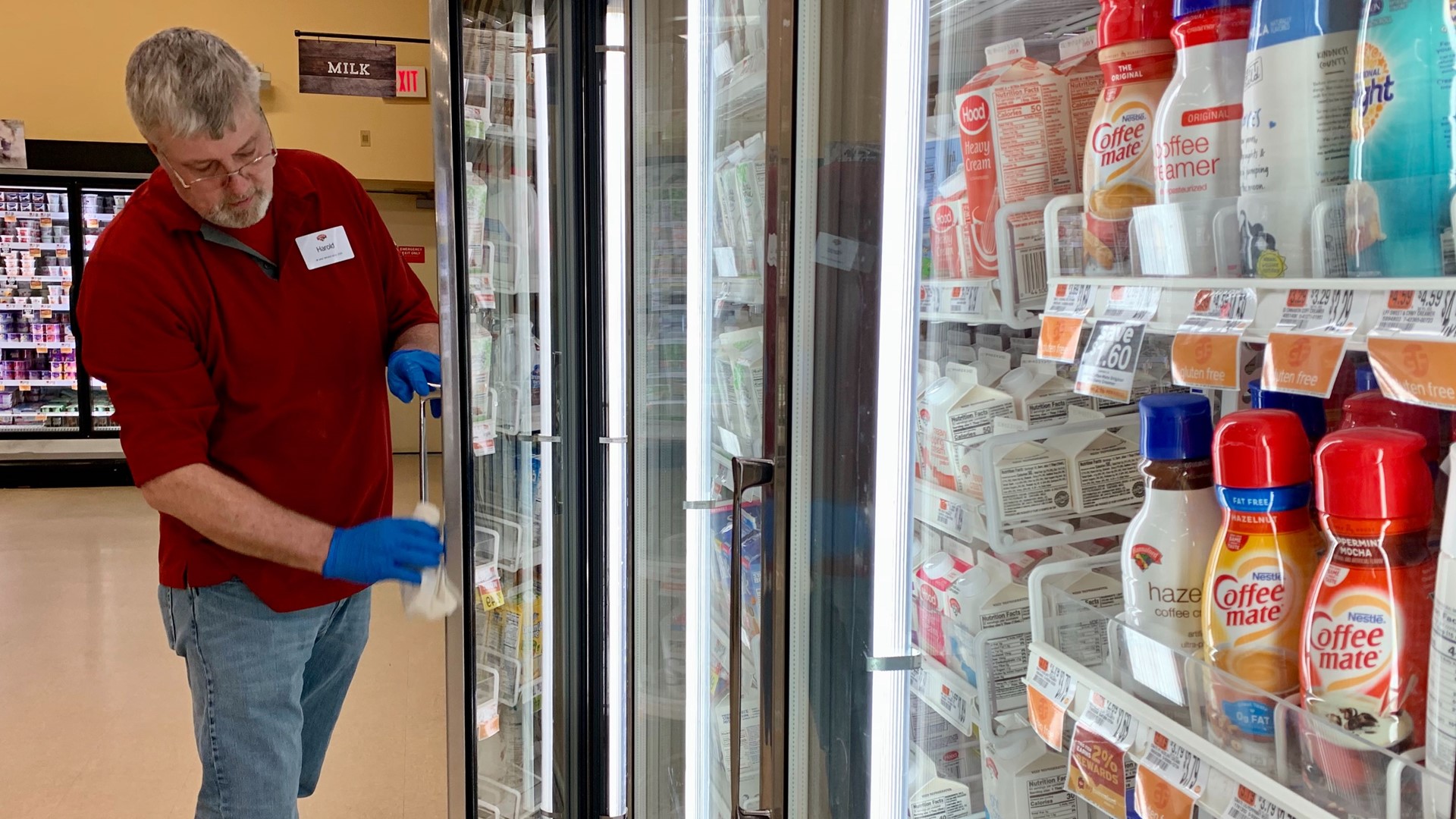 SCARBOROUGH, Maine — Maine's largest grocery store chain, Hannaford, is enacting new protocols to protect both its workers and customers amid the coronavirus outbreak.

Mike Vail, the company's president, told NEWS CENTER Maine it has seen a more than 50-percent increase in sales over the last two weeks with so many people panic buying.

One of those employees, Harold Elliot, said he never thought his eight-hour work shift would be spent meticulously scrubbing the cooler doors over and over again.

"For the last three days this is what I've been doing," he said. "Eight hours a day. It's my life now."

Credit: NCM
Hannaford stores have installed Plexiglass shields at all of its stores to protect customers and employees during the coronavirus outbreak.

The Scarborough store is a different experience for shoppers who have to awkwardly navigate the store while avoiding contact with other people.

The deli is closed to customer interaction, with pre-sliced meats and cheeses available in a nearby cooler.

Despite signs telling customers to limit their purchases, toilet paper and paper towels are nowhere to be found, and only a handful of Kleenex boxes are left on the shelves.

"I'm quite confident our supply chain will return but it may be several months," Vail said.

He added that there will be certain items that may be out of production for an extended amount of time.

For example, Kraft may choose to only produce its traditional macaroni and cheese to keep up with demand instead of producing other varieties.

In the store, there is tape up between the ends of the aisles and the registers to force customers into a certain flow.

Vail said it is just as much about protecting them as it is protecting his workers.

"We're very worried for our associates and taking as many precautions as we can to make it safe for them," Vail said.

Credit: NCM
New signs at Hannaford stores tell customers to practice social distancing and maintain a six-foot distance from others at all times.

Workers have also been given paid leave if they are at-risk or have family members who contracted the virus and need to be quarantined, according to Vail.

Contrasting the current situation to a large snowstorm, he said his goal now is to make sure stores and associates are functioning in a way that can sustain them for months.

"You start out with adrenaline and then fatigue sets in and we're really now starting to prepare and schedule and work our folks for a new reality. This is going to continue on for a while," Vail said.

Customers are encouraged to shop at off-peak times and avoid bringing there families with them, following recommendations made by Governor Janet Mills.

Mills called for action by large box stores and grocery stores in the state as she announced a new order to force non-essential 'public-facing' businesses to shut down Tuesday.

Credit: NCM
Mike Vail talks to reporters at the Hannaford store in Scarborough about new changes in the wake of the coronavirus outbreak.

She also encouraged limiting customers in stores over 5,000 square feet to 100 at a time.

Mills once again echoed that same message in a press conference on Friday after saying she has been in contact with managers of large stores statewide.

"I’m going to applaud some of them and urge the rest to be doing what they’re supposed to do," Mills told reporters.

Hannaford stores are open 6-7 a.m. on Tuesday, Wednesday, and Thursday for customers 60 and older, as well as those considered 'at-risk.'

The company's 'Hannaford To Go' service that was suspended last week is expected to be back online in the next couple of weeks but may have fewer offerings.