Citing unsafe work practices, the largest union at BIW elevates call for shipyard to be shut down

Sen. Susan Collins told NEWS CENTER Maine she asked the Secretary of the Navy on Friday for more flexibility for BIW to meet deadlines and "he seemed receptive." 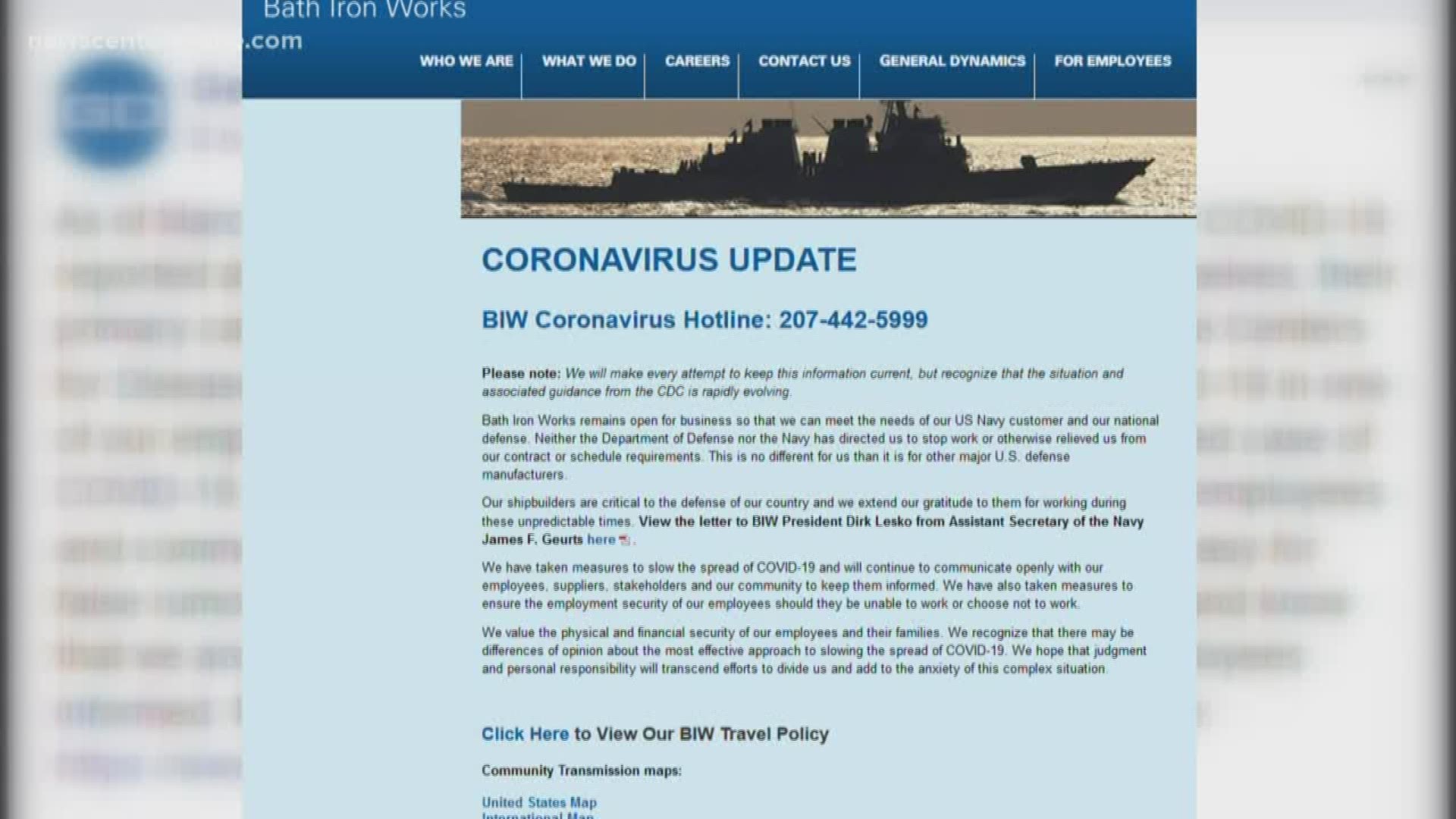 BATH, Maine — Nearly two weeks after the U.S. Department of Defense authorized Portsmouth Naval Shipyard to offer paid administrative leave to civilian employees at high risk of contracting COVID-19, employees at Bath Iron Works (BIW) are questioning why that option is not available to them.

Citing unsafe working conditions and the potential of employees carrying the virus to all 16 Maine counties, leaders of two BIW unions have called upon BIW to close the shipyard for two weeks.

Chris Wiers, president of Local S6 of the Machinists Union, the largest union at BIW, said Friday that while the company has reiterated a Maine Centers for Disease Control (CDC) recommendation that attendees at meetings stay at least six feet away from each other, he was told by management that the rule doesn't apply to workers in the actual shipyard.

"This is probably the most defining example of how BIW puts product ahead of workers," Wiers told NEWS CENTER Maine.

Shipyard workers say they are increasingly concerned about working conditions at BIW, and about high-risk employees and those with high-risk family members potentially contracting the virus.

Wiers said he was notified twice this week by employees that co-workers had reported for work either with symptoms or having just returned from traveling. Both times, he said, BIW security arrived and escorted the employee from the shipyard.

Wiers said each day, workers enter the shipyard through only a few gates, push turnstiles and enter their ID numbers on the same touchpads. He said BIW's response was to place bottles of hand sanitizer near the touchpads.

BIW spokesman David Hench said Friday evening that employees of the main shipyard enter through five main gates, which each have four or eight turnstiles. The turnstiles are cleaned multiple times each day, he said, and estimated approximately 200 accounting terminals, or "touchpads," throughout the shipyard, and most have hand santizers.

BIW said the shipyard had implemented measures recommended by the CDC and encouraged all employees to work with them to keep the shipyard safe.

On Thursday, legislative and local leaders joined the call, and Maine's Congressional delegation wrote to the Secretary of Defense, asking that they "clarify their ... guidance" to contractors and "work to mitigate ... financial burdens ... to include relief from contracting requirements" affected by the pandemic.

But BIW spokesman David Hench, citing "guidance" from President Donald Trump and the U.S. Navy, says that as part of the country's "critical infrastructure," the shipyard must maintain its production schedule.

"Bath Iron Works builds destroyers for the U.S. Navy," Hench said in an email Friday. "As a defense contractor we cannot unilaterally refuse to perform our government contracts or discontinue operations."

Hench referred to a letter from Assistant Secretary of the Navy James F. Guerts to BIW President Dirk Lesko on Thursday which reiterated the importance of shipbuilding and repair.

But U.S. Sen. Susan Collins (R-Maine) told NEWS CENTER Maine that she spoke to Guerts and Acting Secretary of the Navy Thomas Modly on Friday, and asked that BIW be granted more flexibility to meet deadlines, as well as additional cash flow, in order to allow BIW and other private shipyards to operate with the same standards as public shipyards like Portsmouth Naval Shipyard.

"He seems receptive to that," she said. "All three of them did and there are going to be further conversations between the Assistant Secretary of the Navy and the President of BIW."

On March 8, the Department of Defense authorized Portsmouth Naval Shipyard in Kittery to authorize civilian employees who could telecommute to do so, and those who could not but were deemed high-risk -- 60 years old or older, with a pre-existing health condition or caretaker or with a family member with a pre-existing health condition -- to go on indefinite paid administrative leave, spokesman Gary Hildredth told NEWS CENTER Maine.

Approximately 30 percent of the shipyard's 6,500 civilian workforce are either telecommuting or on administrative leave, he said.

Defense industry analyst Loren Thompson of The Lexington Group said contractors for the federal government must comply with "a huge collection of rules and regulations" and typically must receive a federal waiver before they could modify their production schedule.

Thompson said defense industrial associations such as the Aerospace Industrial Association have asked the Pentagon to allow greater flexibility in meeting contract deadlines.

Thompson said the only way to resolve the stalemate "is for the federal government to provide some sort of relief."