Grace Fecteau, co-owner of the Huiskamer Coffee House, sells almost all local Maine products -- an initiative that's supporting the economy during the coronavirus. 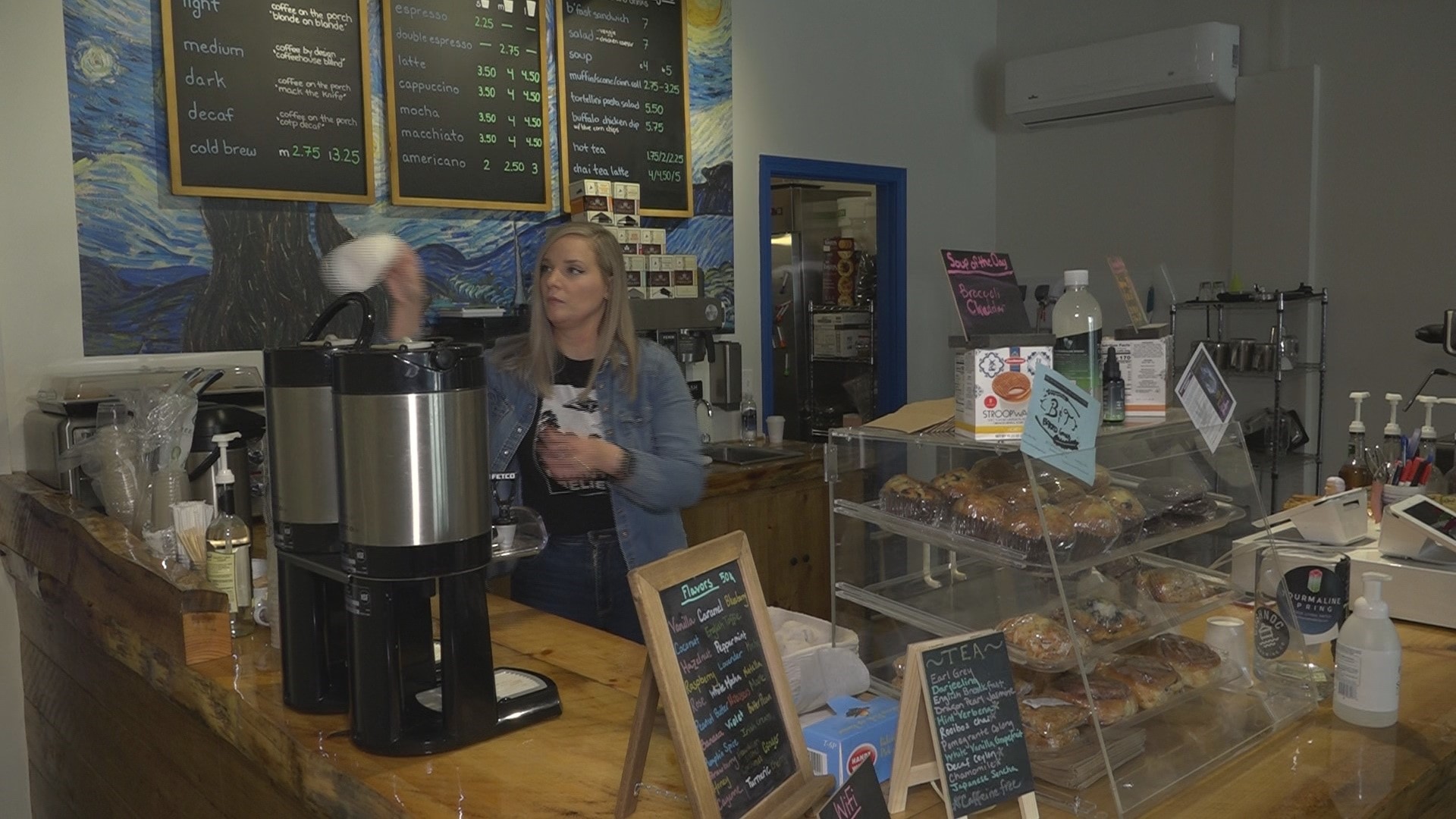 AUGUSTA, Maine — On a bright Tuesday afternoon in Augusta, Water Street is alive with the sounds of bustling construction work. For some, the loud noises and clustered roadways may grow tiring, but it's a sure sign that the downtown of Maine's capital city is expanding.

One of those relatively new businesses in the up-and-coming metropolis is Huiskamer Coffee House, a quaint coffee shop with Dutch influences, made apparent by the sprawling Vincent Van Gogh "Starry Night" replica behind the counter. Grace Fecteau and her husband, Justin, started up the shop with hardly any experience in the business. Grace says it's been a "wild ride" so far, but it's one that she's grateful for.

"There was nothing here," Grace expressed. "So, it was quite the adventure to completely renovate and kind of start this new lifestyle."

That new lifestyle has been tested these past couple of months by the coronavirus pandemic. The journey has been difficult for a number of small, local businesses for obvious reasons -- but Grace says at times, the unknowns are hard to manage.

"I’m like a numbers (and) data person," Grace explained, detailing her roots in the army, which is where she and her husband met. "You just can’t collect data in these types of environments. It’s all over the place, so I think for us that’s been the biggest challenge -- is you kind of have to go with your gut."

A gut feeling she has had since opening, though, has been the importance of supporting other local businesses by outsourcing to them, rather than stores run by large corporations. Grace explained proudly that almost every product she sells comes from a local Maine company -- and that was another reason that she felt compelled to stay open during this pandemic.

"If we were to shut down operations, that’s a hit (to) our baker for example, or who supplies our honey, (our) two coffee roasters," Grace said.

It would also be a hit to Ryan Hill, the owner of Wrapped Up, located about a minute or two away on Hichborn Street. He supplies the popular breakfast sandwiches at Huiskamer and says that their partnership has allowed for some sense of relief during these challenging times.

"I would say the biggest importance is just having a small little partnership working with the other business owners, showing that we’re all trying to support the local economy before corporations that will be here when everything is left over and done," Hill explained from behind his sandwich counter.

He says that the emotional support they offer one another is uplifting too.

"We get to have that nice little, 'So, how slow are you? (Was) yesterday winter numbers again?'" Hill chuckled. "That kind of thing."

Grace's partnerships extend as far out as Camden, where Dan Dishner roasts his Coffee on the Porch coffee beans. Dishner says that his online sales have helped him immensely during COVID-19 and so has Grace's business, since he is one of her two primary coffee suppliers.

"There’s only so much I personally can do," Dishner acknowledged. "You know, when people are like Grace and need more coffee... We can bring it the next day if it worked out."

The Augusta Downtown Alliance has also been a lifeline for some of these local businesses as of late. Members were able to raise up to $50,000 through private businesses and then gave out grants to 20 small businesses in Augusta and Gardiner via the Kennebec Valley Downtown Relief Fund.

"This was sort of a lifesaver," said Michael Hall, the executive director of the Alliance. "(It) sort of let them be able to continue to make payroll, continue to pay rent, and in a sense, continue to function."

"I think it saved a lot of businesses," Heather Pouliot, the board president for the Alliance, added. "Even just $3,000 can make a big difference in such a small business."

To find out what local businesses are open in your region, click here.

RELATED: The long-term effect social distancing during coronavirus, COVID-19 pandemic may have on kids, including depression and anxiety