A year of pandemic marked with church bells

The congregation at the Episcopal Church of St. John Baptist on Main Street in Thomaston has been ringing the bell each night for a year to honor first responders. 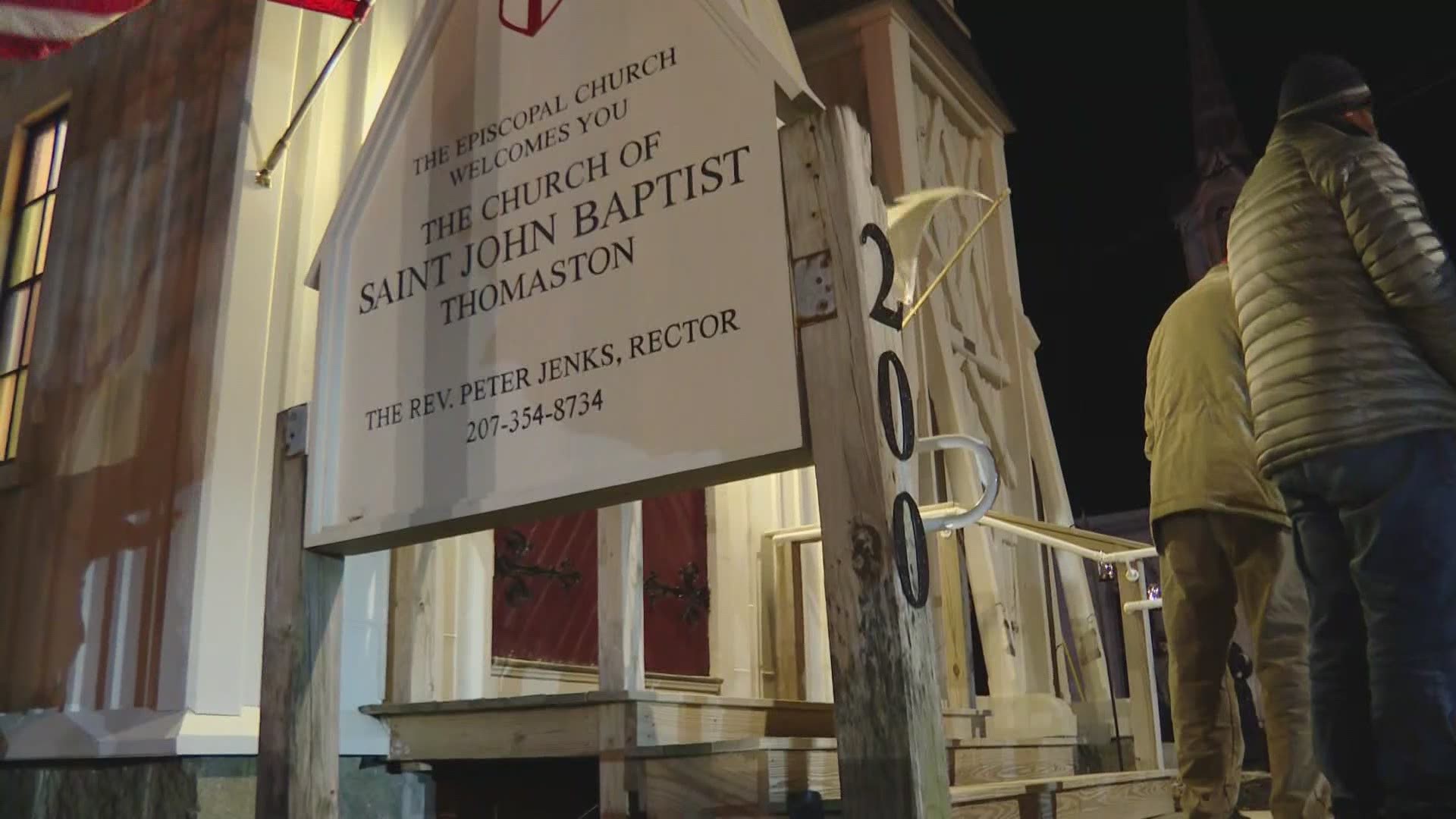 THOMASTON, MAINE, Maine — On one of the coldest nights of this late winter, a line of firefighters, EMTs, and police officers stood on the curb in from of Thomaston’s Episcopal Church.

They were not working. They were listening.

For the past year, the congregation at the Episcopal Church of St. John Baptist on Main Street has been ringing the church’s bell to honor first responders who have been helping those with the COVID virus.

It is not an occasional event. The church members have been ringing the bell every night at 8 p.m. since March 15 of last year.

“Who thought it would last this long? Not one of us,” said Chris Rector, a former firefighter and long-time member of the church.

Rector and other members of the church vestry, who began the bell ringing 366 days earlier, said it was a spur of the moment decision at the time. Mark Ranney said that the first night, people in town noticed.

“As I was walking home, a neighbor said 'What’s going on? The bell is ringing. Is there a fire?' I said, 'No, we’re just ringing to say thank you to first responders,' and it spread fast.”

They said the community response has been gratifying. Starting in summer, the Baptist church next door, with a mostly elderly congregation, let people climb the tower to ring its bell.

The Federated church about two blocks away also joined in so all three could be heard ringing on summer evenings—which the church members say people seemed to appreciate.

“People who are walking by will say its so great you guys are still ringing, it means something,” Sandra Hoekstra said, who was the first ringer that day in 2020 and started the ringing Monday night as well.

As the firefighters, police, and EMTs stood to watch in the cold, the bell at St. John’s rang out, echoed by the Baptist church bell seconds later. Church members rang, and some of the first responders took turns as well.

One of the firefighters said the year of ringing the bell was “awesome,” and they all thanked the church members for the nightly support.

The church members said it means a lot to them, and while a number of others have also come to ring the bell, those who started it keep coming back—including in the dark days of December and January when cases and deaths spiked.

“It was always intended to be a joyful, hopeful act, so when things became more difficult we were even more aware that what we are doing is important,” Brian Perkins said.

It has also made people more aware of the churches, Sandra Hoekstra said.

“So it has put a face to our church,” she said. “It's kind of given a little glimpse of who we are.”

It has also given the churches a voice, as they remind others in the town to also show thanks and appreciation for the first responders and others on the front line of the pandemic.

How long will they keep at it? None of them know.

After a year of nightly ringing and two broken bell ropes, they keep doing it, inspired, Chris Rector said, by knowing the bell has an impact on the town and on those who serve it.

“And I’ve never said to myself I don’t feel like going up tonight.”