Kenzie Dickinson’s genetic disorder is so rare it doesn’t have a name. She suffers from seizures, growth delays, speech problems, and other physical conditions. 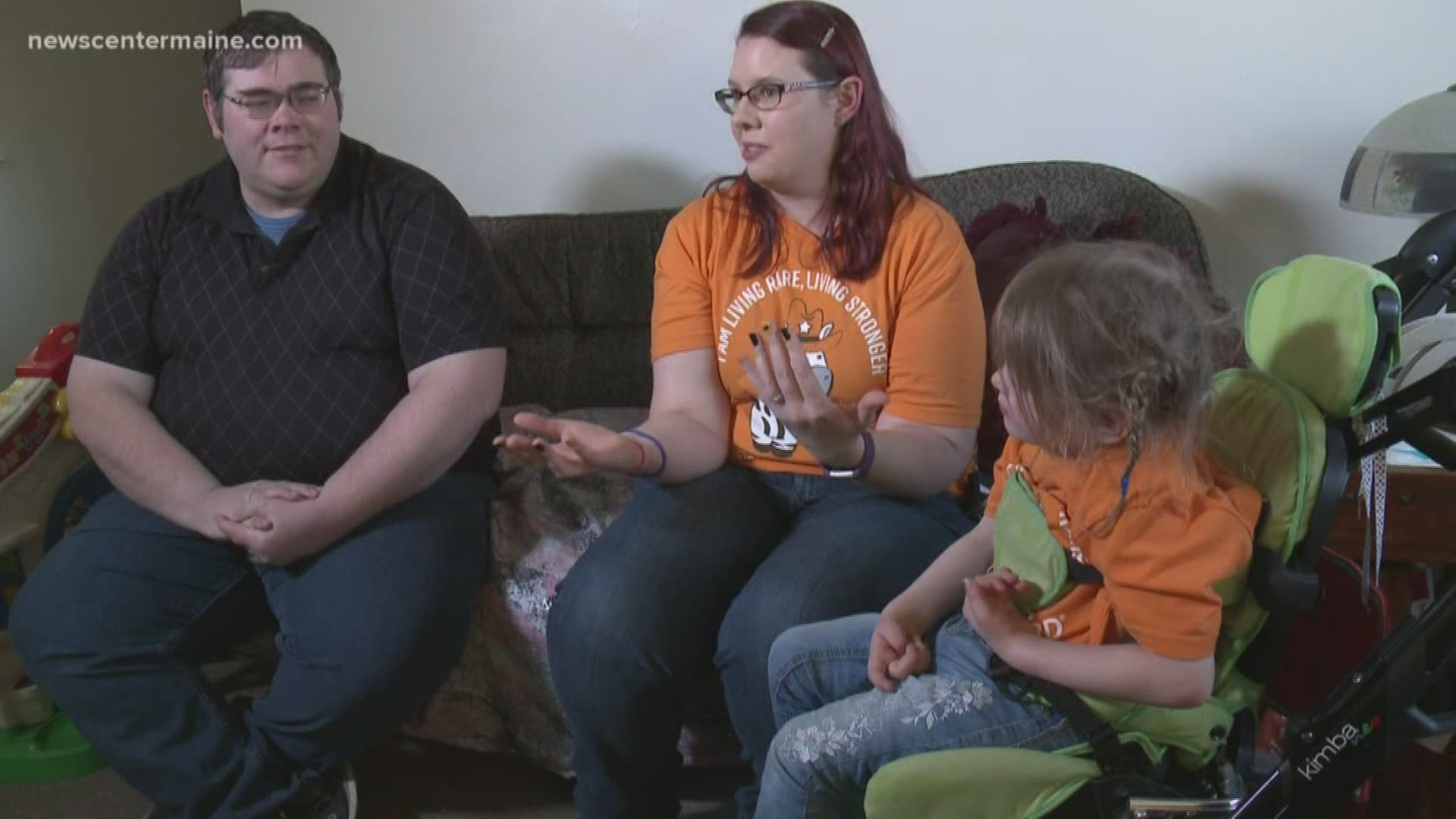 PORTLAND, Maine — Kenzie Dickinson is a 5-year-old spitfire. Her favorite things are animals, Minnie Mouse, the Spice Girls, and sports.

“She'll yank her sock off and stick it in her mouth and wait for you to notice and start laughing," Cyndi said.

When Kenzie turned one year old her parents thought something wasn’t right. She wasn’t hitting her milestones.

“We went through a litany of what they thought it was which it wasn’t, Rett Syndrome, Cerebral Palsy. They went through round after round trying to eliminate the possibilities until finally it was 'we’re coming up empty,'” Kevin said.

Kenzie’s parents decided to try genetic testing. They both supplied DNA samples, including Kenzies and doctors were finally able to narrow it down.

"We've isolated this gene that doesn't have a name other than the name of the gene itself,” Kevin said.

VPS13D disorder is so rare Kevin says, only 19 people in the world have it.

Kenzie Dickinson has a rare disorder

Because of the disorder, Kenzie has experienced growth delays. She can't walk and struggles with speech and seizures. She also suffers from several conditions, like Spasticity, Dystonia, and Chorea that cause her muscles to contract uncontrollably, leading to extreme tightness in her arms and legs and keeps her entire body in constant motion.

"Her arms are constantly moving so when she tries to do a task she has to really work at it to get it. And those constant movements have been burning calories off," Kevin said.

For two years Kenzie's weight stayed at 25 pounds, but thanks to a feeding tube she is now up to 32 pounds.

She also takes nine different medications and regularly sees a team of six specialists in Boston. Doctors who can provide few answers for Kenzie's parents.

"We don't have an idea of life expectancy. Life span, is it affected? We imagine it is," Kevin said.

Today though, Kenzie is making great strides. She attends Pre-K, can crawl, and is learning sign language.

Like most parents, Kenzie's mom and dad just want their youngest daughter to be happy and to be able to experience as much joy as she can.

"I love her the way she is and I just want to be able to provide for her the best life I can," Kevin said.

This family's priority, after all the hospital visits are done, is simply spending quality time together.

You will literally see her vibrating, her whole body is shaking, she just is so happy and excited," Kevin said.

And Kenzie is all about sharing that love.

Cyndi says, "you have to remind her that not everyone wants a hug because she'll try to hug strangers."

All the trips to Boston Children's Hospital have taken a toll on the family's car. It broke down last week.

As Kenzie continues to grow and gain weight the Dickinsons are hoping to be able to purchase a wheelchair accessible van to make their travels easier.

A fundraiser for Kenzie and her family is being held Friday, Jan. 31 at the Portland Elks Lodge to help raise money for the Dickinson Family. There will be a cash bar, appetizers, and music provided by DJ Jim Fahey. There is no cost to attend, however donations will be accepted at the door.