The "Sesame Street" characters appeared in a virtual town hall event Saturday morning called "Coming Together: Standing Up to Racism." 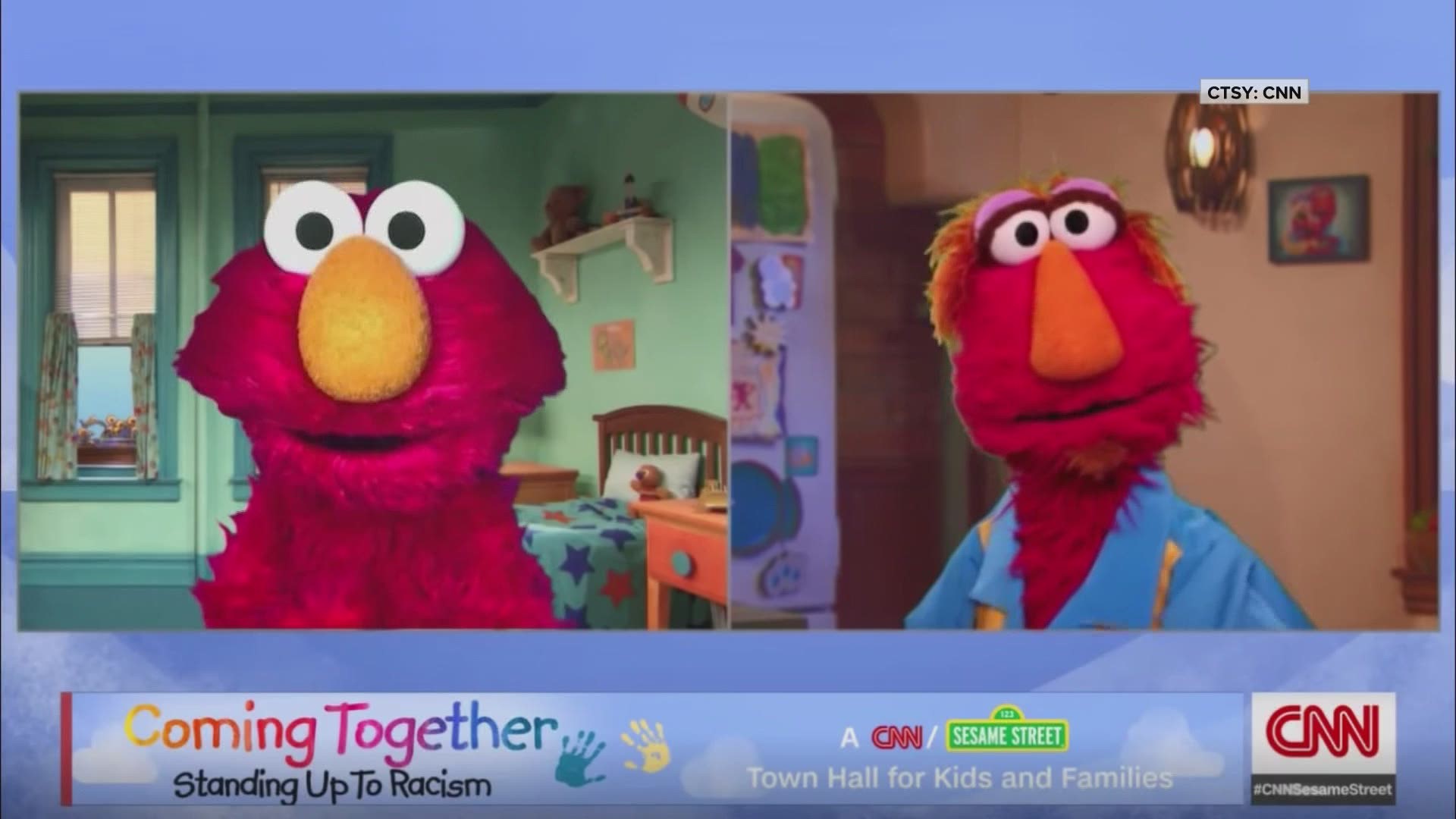 Finding the right words to explain to children what's happening in the world around them is sometimes the most difficult role a parent has, and as protests across the U.S. continue, many children are asking a lot of questions. So, "Sesame Street" teamed up with CNN to help.

In a virtual town hall, CNN's Van Jones and Erica Hill partnered with "Sesame Street" for Coming Together: Standing Up to Racism, a special event for kids and families.

To start the town hall event, Elmo’s dad, Louie, takes the opportunity to explain the ongoing protests calling for racial justice happening around the United States.

At the start of the CNN clip (found below), a crowd chants “Black Lives Matter” while Elmo looks out the window and tells his dad that he doesn’t understand what’s happening. The red Muppet then asks his dad, “Why are these people together?”

“They’re gathering together to protest,” Louie says. “A protest is when people come together to show they are upset and disagree about something. They want to make others aware of the problem. Through protesting, people are able to share their feelings and work together to make things better.”

Elmo’s dad goes on to explain that sometimes protesters make signs, sharing an example of one that says “Love Justice Peace” that he reveals he will be bringing to a protest at the community center later in the day.

“They look upset,” Elmo pointed out. “Are the protesters sad?”

“They are sad and upset and they have every right to be, Elmo,” Louie says. “People are upset because racism is a huge problem in our country.”

When Elmo asks what racism is, his dad replies, “Racism is when people treat other people unfairly because of the way they look or the color of their skin.”

“The color of their skin?” Elmo asks. “Elmo doesn’t understand, daddy. Elmo has friends with different types of skin, oh, and fur, too."

“I know Elmo, but not all streets are like Sesame Street,” his dad says. “On Sesame Street we all love and respect one another. Across the country, people of color, especially in the black community, are being treated unfairly because of how they look, their culture, race, and who they are. What we are seeing is people saying enough is enough. They want to end racism.”

In the full clip, Elmo tells his dad that he wants everyone to be treated fairly and wants to end racism, asking his dad, “What can I do, daddy? How can Elmo support his friends?”

“Well we can start by learning and talking about what is happening and take action,” Louie tells his son.

A little history of "Sesame Street"

For more than 50 years, "Sesame Street" has provided educational content for children, and the show hasn't shied away from difficult topics.

The show got its start during the Civil Rights Movement in the 1960s.

A senior advisor of "Sesame Street" during the early stages of the show was a man named Dr. Chester Pierce. He assisted in shaping the show's overall mission.

Dr. Pierce had a major concern with how black people, in particular, black children, were conveyed on television. With his help, the show was populated with the most racially diverse cast that public television had ever seen.

What mattered most to Dr. Pierece about “Sesame Street” was not the alphabet songs, the counting games, or the puppets. What mattered most was the vision of an integrated society where everyone was a friend and treated with respect.

Dr. Pierce was the founder of a group called the Black Psychiatrists of America founded in the wake of Dr. Martin Luther King, Jr.'s assassination. Their mission was to challenge their white colleagues to think about racism in a new way.

With the town hall event, "Sesame Street" clearly has not forgotten its roots. Throughout the years, the show has discussed other difficult topics, too. It has introduced a character who has a parent who is incarcerated, shined a light on foster care and homelessness, and even talked about the coronavirus pandemic.

RELATED: Dwayne 'The Rock' Johnson to President Trump: 'Where are you?'

RELATED: "It made me feel disgusted inside." Protesters in Sanford say counter protesters held long guns and yelled racial slurs