The queuing lanes at Ocean Gateway were filled with cars, lined up in front of a small raised stage. Loud honks, instead of applause, lauded the speakers and grads. 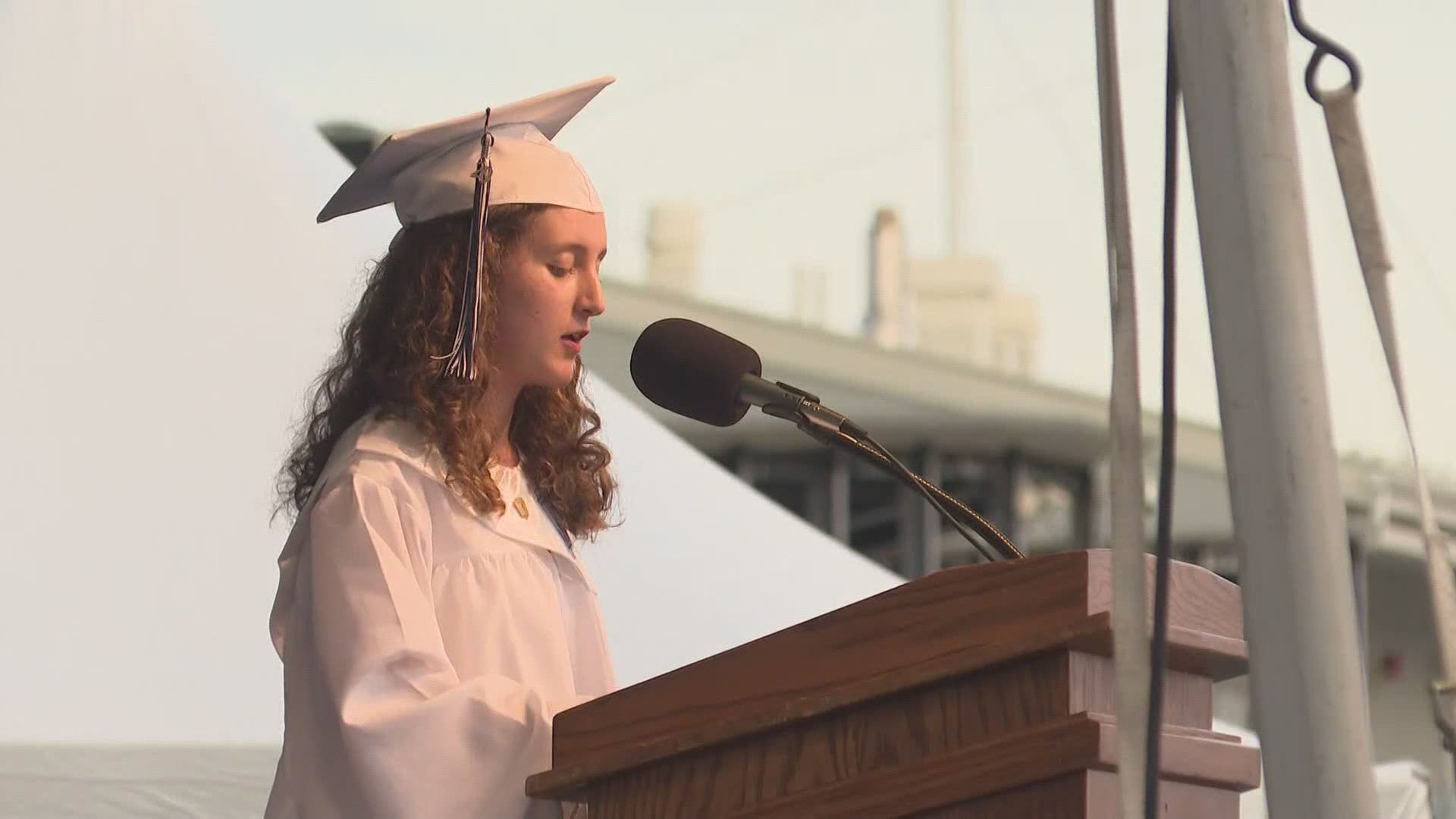 PORTLAND, Maine — Portland High School held its graduation exercises on Wednesday, Aug. 5, at the Ocean Gateway terminal. It was the high school’s 199th commencement ceremony but the first drive-in ceremony in the school’s history, due to the COVID-19 pandemic.

There were 181 graduates in the Class of 2020.The hour-and-a-half long ceremony included remarks by Portland Superintendent Xavier Botana and Portland High Principal Sheila Jepson, addresses by students, and the presentation of awards and diplomas.

Each graduate was allowed to bring one vehicle to the graduation ceremony, filled with family members and other supporters as desired.The queuing lanes at Ocean Gateway were filled with cars, lined up in front of a small raised stage. Loud honks, instead of applause, lauded the speakers and the graduates.

The graduates walked, wearing masks, from their cars to the stage to receive their diplomas. Botana told graduates he recognized the disappointments of the last months of their senior year.

“You missed out on many cherished rituals that you’ve been looking forward to for four years,” he said. “And you had to wait two months longer than usual to celebrate your graduation in this unconventional way.”

But he praised the students for their resilience in the face all the adversity caused by the pandemic. He quoted Desmond Tutu, former South African archbishop, human rights activist and Nobel Peace Prize winner, who said: “A time of crisis is not just a time of anxiety and worry. It gives a chance, an opportunity, to choose well or to choose badly.”

Botana praised the Class of 2020 for its accomplishments in academics, athletics and activities.

“Members of the Class of 2020, you clearly have chosen well,” he said.

He noted that an impressive 88 percent of the class applied to college and are now headed to 70 institutions of higher learning, including elite colleges and universities all across the country and in Maine.

Class President Erin Chadbourne said students never guessed that when they left school on March 13 at the start of the pandemic, it would be their last day together.

She said the phrase, “You don't know what you've got 'til it's gone,” took on new meaning for the Class of 2020. But she spoke proudly of how the class coped and also reached out to help others.

For example, the class donated the $800 it raised from an online silent auction – originally intended as a fundraiser for such class event as senior prom – to support Black Lives Matter-Portland and racial justice.

Valedictorian Jean Wriggins said another phrase – “May you live in interesting times” – took on a new meaning. She noted that the pandemic has caused great suffering and death and exposed inequities worldwide. But she said she was full of hope that her generation had the ability to face and address that and other challenges.

Class Salutatorian Amelie MacDonald recounted how she had so much stage fright when she was in a school play during her freshman year that she vomited between acts. But she said she went back out and performed because “I wasn’t going to let everybody down out there, including myself.”

RELATED: All 16 Maine counties get initial go-ahead for in-person instruction in schools

She advised the Class of 2020: “Do what scares you. That’s what makes you really alive.”Principal Jepson told graduates they should be proud of what they have accomplished and “how you have represented yourselves and our school.”

She also recognized the Class of 1970 because the pre-COVID plan had been to have members of that class join the Class of 2020 as they celebrated the 50th anniversary of their graduation. Those class members stayed home because of the pandemic but they took the time to write 200 cards wishing the Class of 2020 well. Every graduate this year got one of the cards and Jepson thanked the former graduates for their kind gesture.