'It is overwhelming': Maine teachers unions call for support as pandemic surges

In a letter, teachers from at least 8 school districts across Western Maine described 'struggling' students and 'palpable stress.' 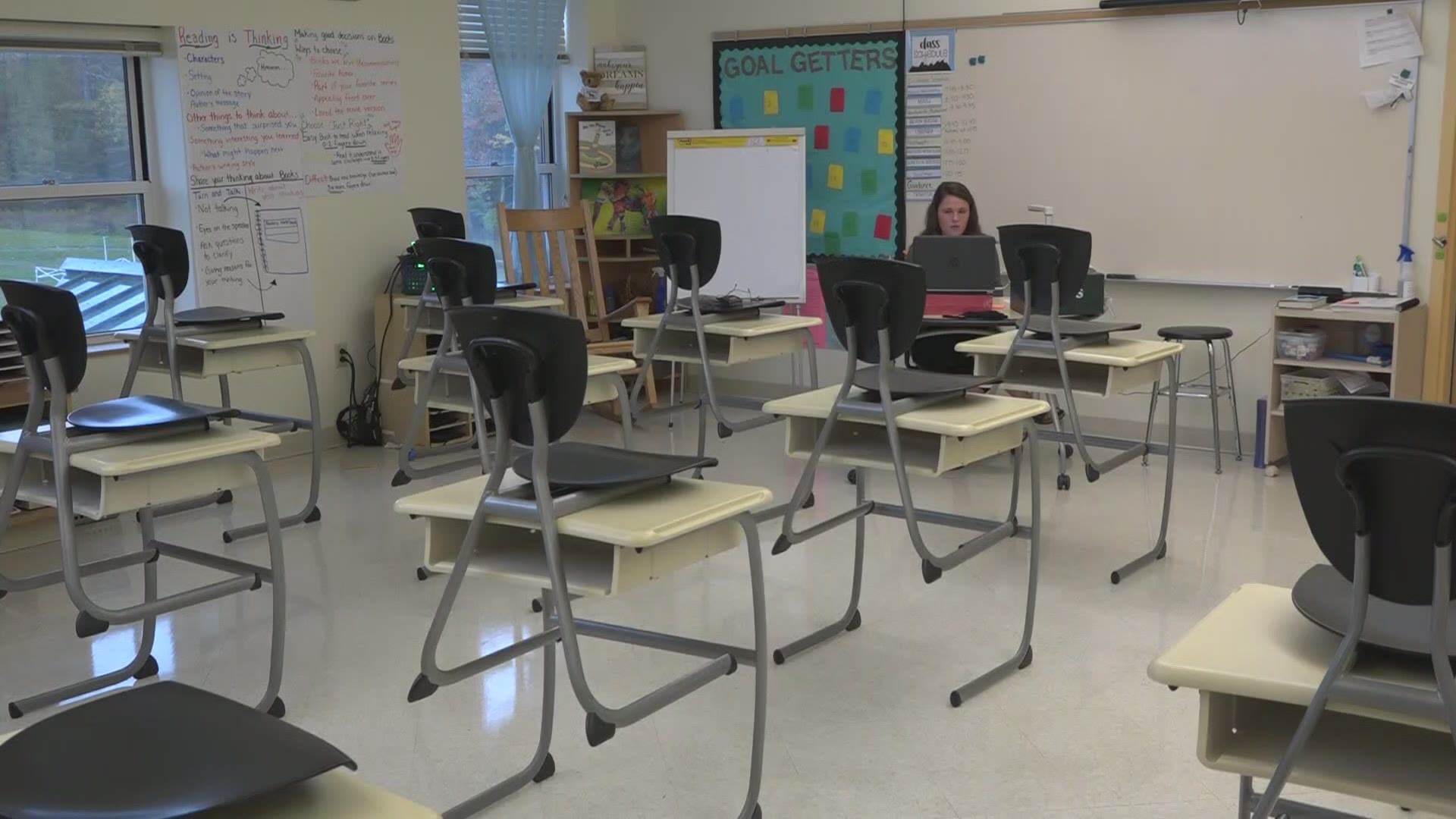 FARMINGTON, Maine — As students across the state slept off their Thanksgiving feasts Friday morning, Doug Hodum was in his classroom.

"The work is exhausting. It's overwhelming," Hodum, a science teacher at Mt. Blue High School in Farmington said.

He and hundreds of teachers across the state are calling for more support as the pandemic continues to put a seemingly unending strain on them, their administrators, and their students.

Hodum, who also serves as president of the Mt. Blue RSD Education Association, was among at least seven teachers union leaders across Western Maine to pen a letter about their ongoing struggle this week.

While the letter entitled 'What's Really Happening Inside Our Schools' acknowledged widespread efforts by state and local leaders, it also called for more continuity and change.

"As leaders of Education Associations in Western Maine, we have dire concerns about our students and the future of public education in our state," it read.

It listed eight demands, including remote-only teachers, removal of testing requirements, and more time to connect with students and plan.

Hundreds of #Maine teachers are calling for more support as the COVID-19 pandemic surges. At least seven teachers unions signed on to a letter to voice concerns about everything from PPE, to struggling students and burnout. MORE DETAILS TONIGHT ON #NEWSCENTERmaine pic.twitter.com/J2DCAgLO8b

"It has just been extremely tiring," Allison Lytton, President of the Lewiston Education Association told NEWS CENTER Maine. "The biggest resource we're lacking right now is simply time. There's not enough time in our contracts to allow for the work that's required of us at this point."

Lytton said she has received countless emails and messages from teachers statewide in recent weeks. She said they 'all have the same story.'

"It's not just one place. It's not a county line. It's not a town line. We're all facing the same thing," Lytton said.

Early this week Maine Dept. of Education Commissioner Pender Makin thanked teachers across the state for their tireless dedication ahead of the Thanksgiving holiday.

"We've been asking more of our schools than we've ever had to ask before," Makin said.  "I wanted to take a minute today to thank you for your extraordinary efforts and deep commitment to the education of Maine's children."

Makin also noted that it was teachers' hard work that allowed 100-percent of Maine's public schools to safely get back to learning in one way or another.

But for teachers like Hodum, in his empty classroom on his day off to just get caught up, they want more than a 'thank you.'

"We just needed to make sure people understood how hard it is to do what we're trying to do," Hodum said.

The head of the Maine School Management Association said he was surprised by the letter and did 'have specific information regarding many of the districts referenced.'

"Workload for all involved in this effort has been immense: by teachers, educational support staff, building administrators, central office staff, superintendents, school board members, and parents who are employees in other businesses that have been impacted by COVID-19," Steve Bailey said.

Bailey noted that plans and practices in districts statewide are evolving and changing regularly to meet the needs of the individual communities.

He also said more action from the federal government to get a new COVID relief package is required. Funding provided through the federal CARES Act is set to run out come Dec. 30.

"None of this has been easy and all are concerned," Bailey said. "The effort needs to continue to be a combined effort and everyone is not going to be happy all the time as opinions will vary."

Due to the holiday, the Dept. of Education as well as superintendents for Mt. Blue and Lewiston schools did not return immediately return NEWS CENTER Maine's request for comment.