Vetri recently was accepted into Massachusetts Institute of Technology and will most likely pursue a double major there in electrical engineering and physics. 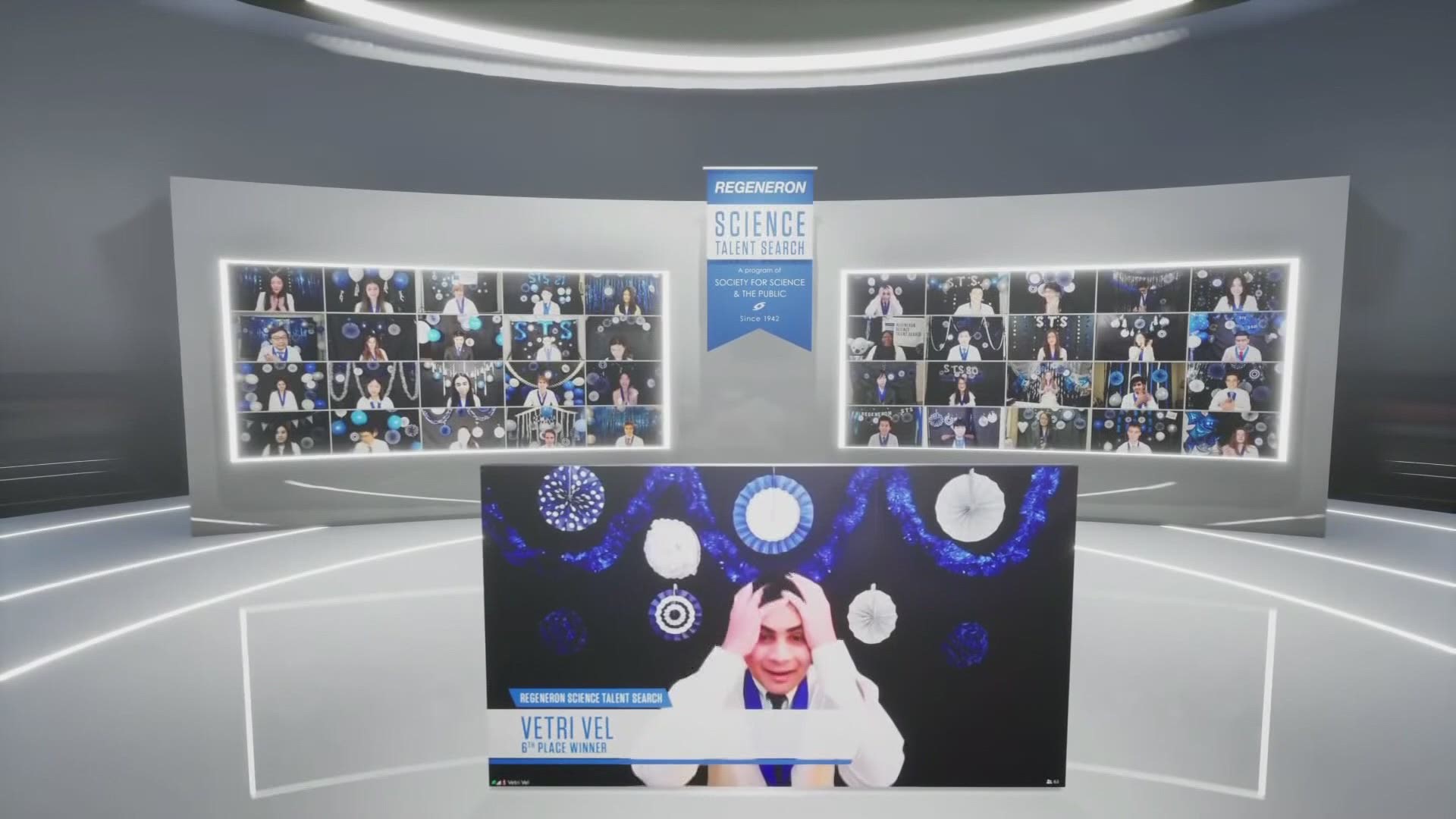 Regeneron and Society for Science Talent Search is the nation’s oldest and most prestigious science and math competition for high school seniors.

Vel created a deep learning system that combines a small computer and a thermal camera to detect heat signatures of a fallen person and immediately text for help.

His hands-free detection system was able to distinguish among competing images to identify a fallen person at an average accuracy of 98 percent. Vetri says he started his project after a neighbor collapsed alone at home, and knew that was a popular problem many seniors in Maine and throughout the world were facing. Vetri tells NEWS CENTER Maine that falls among senior citizens are a leading cause of fatal injury among older adults, the reason why he decided to focus his project on finding a solution to the wide-known problem.

"One of the things I think the judges appreciated was that I kept continuously improving the system, not the big test is testing it for a month in an actual senior living facility in a room and see what kind of false positives it gets and then I can use those to cut down on some of the common errors that it has," said 16-year-old Vel.

“Congratulations to Vetri on winning a sixth place in the Regeneron Science Talent Search 2021,” said Maya Ajmera, President and CEO of Society for Science and Publisher of Science News. “He is a bright young scientist whose research has the potential to increase the safety and independence of elderly people living alone at home or in assisted living facilities, and we are excited to see where his research takes him.”

Historically, the competition and award ceremony is held in person in Washington, D.C., but due to the ongoing pandemic, the competition took place virtually to keep the finalists and their families safe.

More than $1.8 million was awarded to the finalists, who were evaluated based on their projects’ scientific rigor, their exceptional problem-solving abilities, and their potential to become scientific leaders.

"These young people are the stewards of our future and I could not be more inspired by their hard work and pure grit," said Ajmera.

The Regeneron Science Talent Search competition celebrates the hard work, innovative thinking, leadership qualities, and creativity of students who are bringing a fresh perspective to solving significant global challenges through their own research and discoveries.

“Congratulations to this year’s winners of the Regeneron Science Talent Search. Your curiosity and passion for science – as well as your unique genius for it – has now been validated,” said George D. Yancopoulos, M.D., Ph.D., Co-Founder, President and Chief Scientific Officer of Regeneron, who credits his experiences as a winner of the 1976 Science Talent Search for propelling him on a path that led his team to invent several of the world’s most important medicines, including treatments for blindness, allergic diseases, Ebola and COVID-19. “I hope you now take on the responsibility of using your powers and ingenuity to help address some of the truly existential challenges facing humanity, from disease to climate change.”

Vel tells NEWS CENTER Maine he will use all of those $80,000 to help pay for his university education. He recently was admitted into the Massachusetts Institute of Technology. he said MIT was his dream school, so he most likely will pursue a double major in physics and electrical engineering.

"I'd like to thank Regeneron and the Society for Science for setting this up, because they did such a good job, they sent us packages with everything we needed, items for each day and it was fun doing that, they scheduled events every day for us,  we played games and got to know each other and that formed a pretty big net with the rest of the kids," said Vetri.

Vetri says about 18 of the new friends he made at Regeneron have been accepted to MIT, so he is excited to potentially go to a school with some familiar faces!

These students will join the ranks of other Science Talent Search alumni, many of whom have gone on to have world-changing careers in STEM fields, and some of whom have earned the most esteemed honors in science and math, including the Nobel Prize, National Medal of Science and MacArthur Foundation Fellowships.

Each year, around 2,000 student entrants submit original research in critically important scientific fields of study and are judged by leading experts in their fields.

The Regeneron Science Talent Search focuses on identifying, inspiring, and engaging the nation’s most promising young scientists who are creating ideas that could solve society’s most urgent challenges.

In 2017, Regeneron became only the third sponsor of the Science Talent Search, increasing the overall awards distribution to better reward the best and brightest young minds. Through its 10-year, $100 million commitment, which also supports a range of outreach and equity programs, Regeneron nearly doubled the overall award distribution to $3.1 million annually, increasing the top award to $250,000 and doubling the awards for the top 300 scholars and their schools to $2,000 each to inspire more young people to engage in science.

If you would like to learn more about the other contestants and winners of Regeneron's Science Talent Search, click here.