Kallie McPheters is a student at Mary Snow School in Bangor. She says if a child sits on the bench, it's a sign for others to take notice and ask them to play. 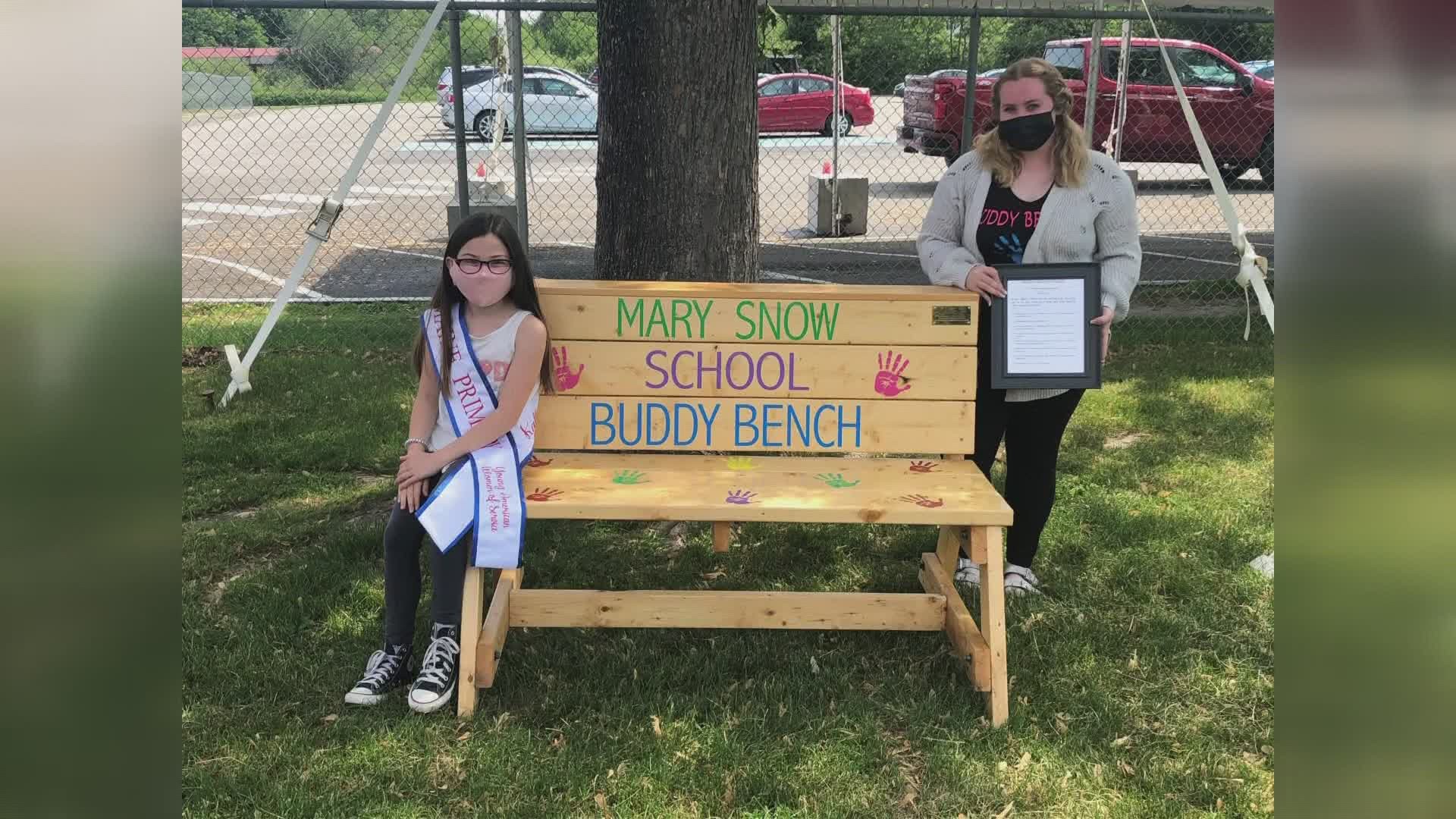 BANGOR, Maine — A new "buddy bench" at Mary Snow School in Bangor is teaching children what to do when they feel lonely.

The bench is a place where kids can sit when they are feeling lonely, sad, or in need of a friend. 4th grader Kallie McPheters came up with the idea and the school principal supported it.

"If somebody gets excluded then they'll sit on the buddy bench, and hopefully someone will ask if they will want to play with them," McPheters said. "So students can make and have new friends."

Kallie McPheter is a 4th grader at Mary Snow School in Bangor. She wanted to have a ‘buddy bench’ at school and she got one!

How it works? If a child feels lonely they can sit on the bench and a classmate will take notice and ask them to play!

Libby is a bullying prevention advocate for Crown Cares at Crossroads Youth Center, an organization whose mission is to end bullying in schools.

Libby along with the youth center selected McPheter's request, bought, decorated, and delivered the chair to the school.

The buddy bench at Mary Snow School is a new tool for students to foster relationships.

"I think that everybody should have a friend," added McPheters.

Brian Bannen is the school principal. He said the buddy bench is a way for kids to help kids.

"It gives them an opportunity to offer that they need help without putting them in a situation where they might not be comfortable asking," Bannen said.

Bannen said he had been previously discussing with his staff members the idea of having a buddy bench, and when McPheters approached him with the proposal, it was a no-brainer for him.

"The first day that we actually had it set up, we had a student sit on it and kids automatically came over, so I think they just naturally gravitate to the idea of helping other people out," Bannen said.

Libby has bought and decorated six buddy benches now being used by schools all across Maine.

The funds Libby got for her community development project were made possible by a grant provided to Crossroads Youth Center from the Myra Craft Foundation, the foundation run by New England Patriots.

Every year since 1998, the foundation has been celebrating those who give their time to help others and is presented to people who exemplify leadership, dedication, and a commitment to improving their communities through volunteerism.

Libby said the buddy benches are all about inclusion and trying to promote bullying prevention on playgrounds.

Libby says she had money to purchase and decorate about 15 more benches.

So far, six schools have received them:

People can contact Libby through the Crossroads Youth Center for a buddy bench by clicking here.

If you would like to make a donation to the Crossroads Youth Center to support its state-wide buddy-bench program click here.