Police in Dover, New Hampshire have located and arrested 38-year-old Nicholas R Mitchell. He is a former associate of “It’ll be Pizza" company. 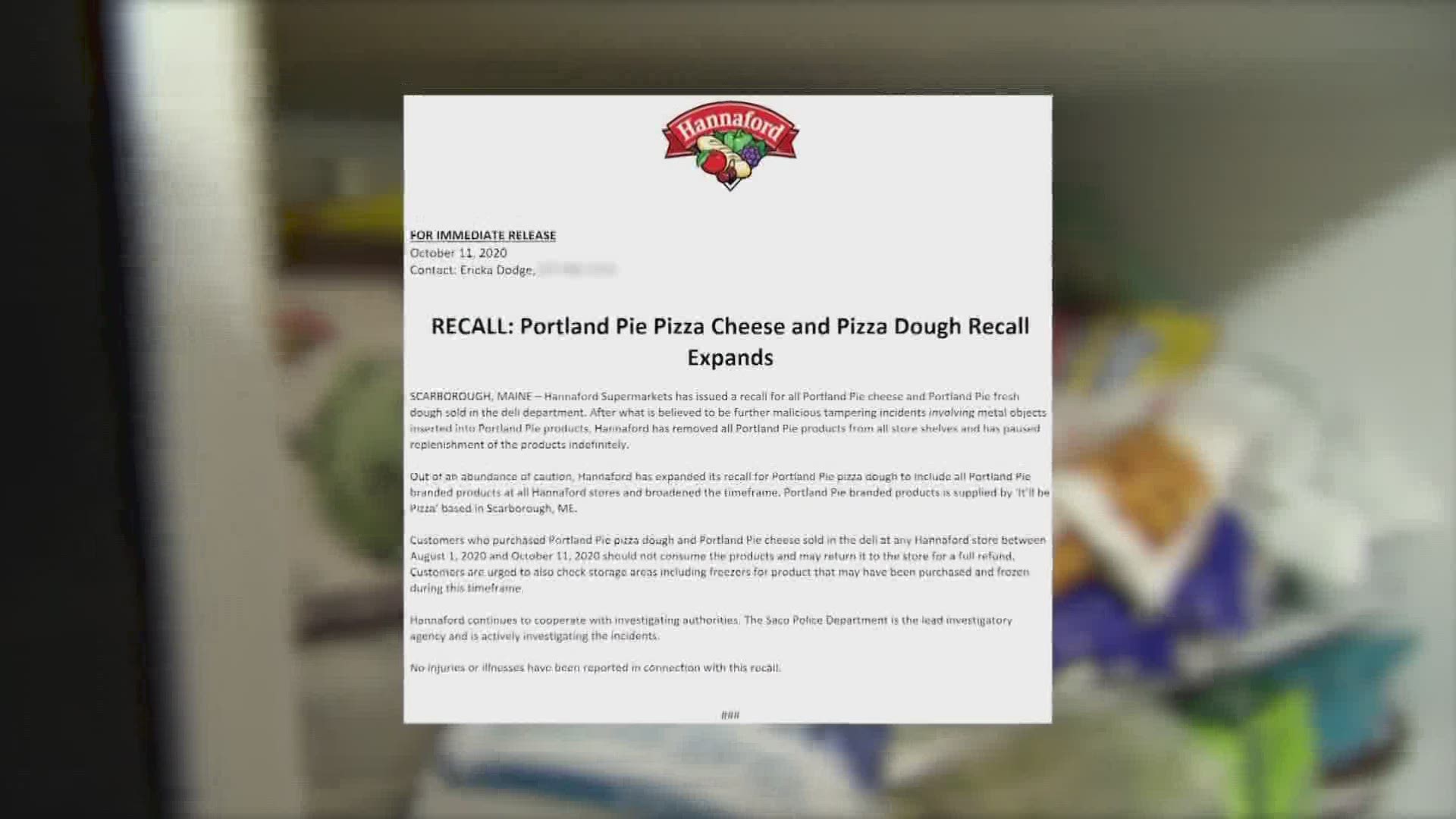 SACO, Maine — According to Saco Police, the person involved in the tampering with pizza dough at the Hannaford in Saco, Nicholas Mitchell, 38, was arrested by the Dover, N.H. police department on Sunday.

Saco police said, "We wish to thank the public and the Dover, N.H. police department for their help in locating and taking Nicholas Mitchell into custody."

On Tuesday, October 6, the Saco Hannaford Supermarket notified the Saco Police Department of a suspected incident of tampering with food items. A customer had purchased a Portland Pie Pizza dough and located razor blades inside the dough.

According to a review of store security surveillance footage, it revealed Mitchell tampered with the packaging of several Portland Pie Pizza doughs. Mitchell is a former associate of “It’ll be Pizza company” who manufactures products for Portland Pie. According to the company, Mitchell worked for them for about 15 months. The company added that there were logical and very compelling reasons why his employment didn't last longer.

According to NEWS CENTER Maine's partners at the Portland Press Herald, Mike White, CEO of It'll Be Pizza, told Saco police that Mitchell worked as a forklift driver at their warehouse in Scarborough. However, he was terminated in June after not showing up for work too many times because of unidentified personal problems.

The Press Herald reports that since Mitchell was let go, It’ll Be Pizza had received more than 100 harassing phone calls. The company’s information technology department linked the calls to Mitchell, and said the number matched the one that Mitchell gave his probation officers.

Police have not said if Mitchell’s employment there may have contributed to a motive for his alleged tampering and calls to It’ll Be Pizza from NECN and NBC 10 Boston were not immediately returned. Investigators did say they do not believe any tampering occurred at that company’s facilities.

Saco police have said charges against Mitchell could include felony reckless conduct charge but the final charges would not be clear until the local district attorney’s office looks at the case.

It's not immediately clear if Mitchell has an attorney who can speak to his arrest. He was expected to be extradited to Maine for court proceedings.

On Monday, Saco deputy police Chief Corey Huntress told NECN that similar incidents with razor blades were being investigated at Hannaford stores in both Sanford, Maine, and Dover, N.H.

Hannaford officials say "out of an abundance of caution," the grocery chain has expanded its recall for Portland Pie pizza dough to include all Portland Pie branded products at all Hannaford stores.

Hannaford also says it has removed all Portland Pie products from all store shelves and has paused replenishment of the products "indefinitely."

Shaw's and Star Market are also removing Portland Pie pizza dough from stores. A Shaw's spokesperson told NEWS CENTER Maine, "we take the quality and safety of products very seriously," and said customers who purchased any of the dough products may return them for a full refund.

Portland Pie branded products are supplied by ‘It’ll be Pizza’ based in Scarborough, Maine.

According to Hannaford, customers who purchased Portland Pie pizza dough and Portland Pie cheese sold in the deli at any Hannaford store between August 1, 2020, and October 11, 2020, should not consume the products and may return it to the store for a full refund. Customers are urged to also check storage areas including freezers for products that may have been purchased and frozen during this timeframe.

No injuries or illnesses have been reported in connection with this recall.

RELATED: Diabetes drug recalled because it may have high levels of cancer-causing compound