The 11 suspects -- who all claimed to be part of a group called the Rise of the Moors -- began appearing in Malden District Court on Tuesday. 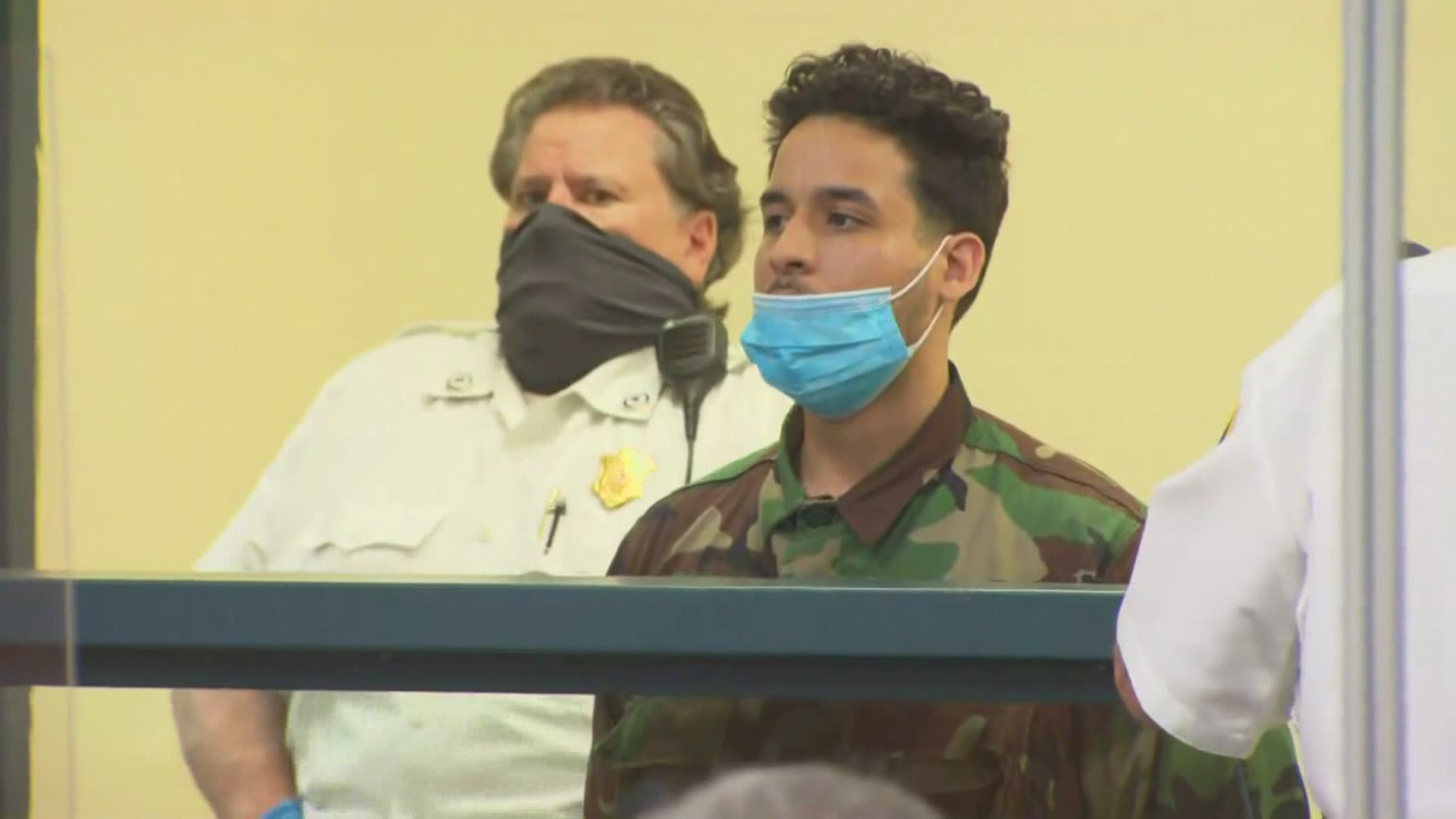 MEDFORD, Mass. — Court proceedings began after a delay on Tuesday for the 11 people who were arrested Saturday after a 9-hour armed standoff that partially shut down Interstate 95 in Wakefield, Massachusetts.

The 10 men and one teenager—who all claimed to be part of a group called the Rise of the Moors—allegedly refused to speak with their court-appointed lawyers, thereby delaying their arraignments.

They arrived at Malden District Tuesday morning and were greeted by family, friends and a large police presence. The courtroom reached maximum capacity, where the men from Rhode Island, New York and Michigan were scheduled to be arraigned on various gun-related charges.

The Massachusetts State Police have identified eight of them. Two men refused to identify themselves. One of the suspects is 17 years old. His identity was not publicly released.

Long line outside Malden District Court where suspects from an armed standoff that shutdown a highway in Wakefield over the weekend are set to face a judge. Courtroom is at capacity. @NBC10Boston @necn pic.twitter.com/tBtbrDJKJ5

The Zoom session watching this is now interrupting. “Free the Moors.... This is BS.” We’re now in recess until 1:30pm. @NBC10Boston @necn

Supporters now coming out to defend the group. “We’re not sovereign citizens.... we have a right to bear arms.” @NBC10Boston @necn pic.twitter.com/nlN0S9rl2n

RELATED: 11 members of group in Massachusetts standoff arrested, I-95 reopened according to police

Quinn Cumberlander, 40, of Pawtucket, Rhode Island, was the first defendant to go before a judge. He told the court that he would like to proceed without a lawyer. He said he was a "foreign national" who cannot face criminal charges and refused to answer certain questions, including his level of education.

He invoked his Second Amendment right to bear arms, said the case should be heard in federal court, and said he meant no harm.

"We didn’t want to cause fear. I object to being held without bail. I am not a threat to society or anybody,” Cumberlander said in court.

The judge eventually held him without bail pending a hearing to determine whether he is dangerous scheduled for Friday.

Another defendant, Rodriguez, 21, of the Bronx, New York, asked that a fellow defendant serve as his attorney but the judge noted the man is not a licensed lawyer.

He also refused to be interviewed by Probation.

“I was seen by a probation officer,” Rodriguez said. “But I did not commit a crime.”

A third defendant, who has refused to identify himself to authorities, told the judge he was a “free Moor.”

The judge ruled he had waived right to counsel, then ordered him out of the courtroom to watch proceedings on Zoom because he kept interrupting her.

The 17-year-old was released to parental custody, with the adults all being held on $100,000 bail at the Billerica House of Correction. Three of the people taken into custody were brought to hospitals to be evaluated, state police said. Two of them have since been released.

All of the suspects are charged with conspiracy to commit a crime, unlawful possession of guns and ammunition, possession of a high-capacity magazine, use of body armor in a crime and improper storage of firearms in a vehicle. Hernandez, Johnson, Dow and the unnamed teen are also charged with giving a false name to police. It could not immediately be determined if they have lawyers.

Troopers recovered three AR-15 rifles, two pistols, a bolt-action rifle, a shotgun and a short-barrel rifle. The group refers to itself as a militia and said they adhere to "Moorish Sovereign Ideology,'' police said. One of the people arrested was a male juvenile and two others refused to give their names.

The standoff began early Saturday when a Massachusetts State Police trooper stopped to offer assistance to the vehicles he found on the side of the highway in the town of Wakefield. Police later said they were refueling. The trooper called for backup and most of the group went into the nearby woods until they surrendered to a police tactical team just after 10 a.m.

The standoff closed Interstate 95 in the area during the busy holiday weekend and some area residents were told to shelter in place. The group told police they traveling from Rhode Island to Maine to conduct "training.''

During the standoff one member of the group broadcast on a social media account of the group "Rise of the Moors" that they were not antigovernment or anti-police. The website for the group says they are "Moorish Americans dedicated to educating new Moors and influencing our Elders.''

The Southern Poverty Law Center's website says the Moorish sovereign citizen movement is a collection of independent organizations and individuals that emerged in the 1990s as an offshoot of the antigovernment sovereign citizens' movement. People in the movement believe individual citizens hold sovereignty over, and are independent of, the authority of federal and state governments.

It is not clear if Rise of the Moors is specifically affiliated with that movement.

Two people who claim to be members of the group spoke outside of the courthouse Tuesday and said the incident was merely a miscommunication.

Mason said he can't confirm that they are "validated members" of the group. "They identify as they identify."

He said police are also aware of what the group promoting on social media sites, but didn't elaborate on what that was.

"This particular group, Rise of the Moors, is actually interested in that so that makes them unusual for groups within this movement,'' Pitcavage said.

"I find it very ironic... that the Moorish sovereign citizen movement is so large and active, they actually repeat many theories that were actually cooked up, again many years ago, by white supremacists,'' he said.