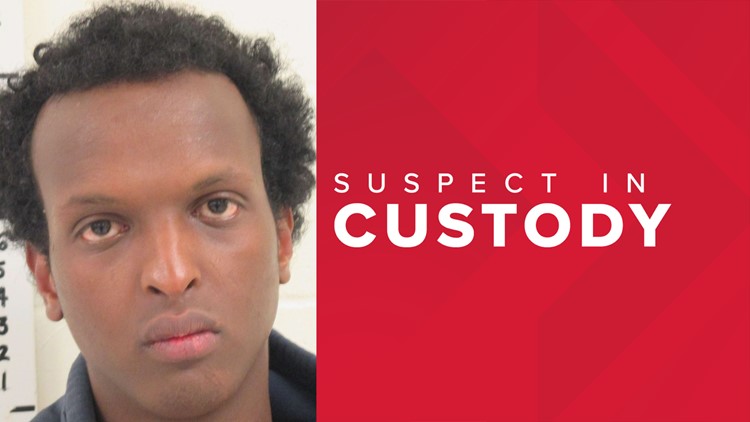 Portland man charged with robbery, assault with a dangerous weapon in Buxton

Muhamud Said Abdullahi, 27, of Portland was arrested on Friday after threatening a homeowner with a handgun. Abdullahi is charged with three Class A crimes.
Author: Maddison Raynor (NEWS CENTER Maine)
Published: 4:41 PM EDT May 23, 2020
Updated: 7:53 PM EDT May 23, 2020

In a news release, Buxton Police say the first incident occurred on Thursday, May 21 when officers responded to a report of three subjects threatening the person living at 151 Turkey Lane in Buxton.

According to police, the alleged victim reported being beaten and having a handgun pointed at him by one of the suspects. The suspects fled the scene prior to officers arriving.

At 10:45 a.m. on Friday, May 22, police were called to the same address. The homeowner reported the same suspects from the previous incident had returned. A Buxton officer found two men and a woman in a car in the driveway, along with a tall man standing near the window of the residence. The responding officer tried to detain all four subjects, however the male outside the car fled, prompting the Maine State Police K-9 unit to track him.

The suspect returned 15 minutes later and was detained for further questioning. Abdullahi was subsequently identified as the primary suspect in the alleged May 21 incident. Buxton Police say Abdullahi also threatened the homeowner with a handgun a second time and demanded money prior to fleeing the scene.

According to a press release, Abdullahi has been charged with robbery and aggravated assault with a dangerous weapon for the Thursday incident, and attempted robbery for the alleged altercation on Friday. Abdullahi is also facing charges upon his release for spitting at and threatening an officer during his arrest.

Abdullahi was taken to York County Jail in Alfred after being uncooperative during the booking process, police say. He is being held on $25,000 cash bail with multiple bail conditions.

RELATED: The fine art of murder in Maine

RELATED: UPDATE: Body found in Jonesport believed to be man who went missing 11 months ago