No one was injured, but Portland police are investigating the shooting at the scene near the homeless awareness encampment at City Hall. 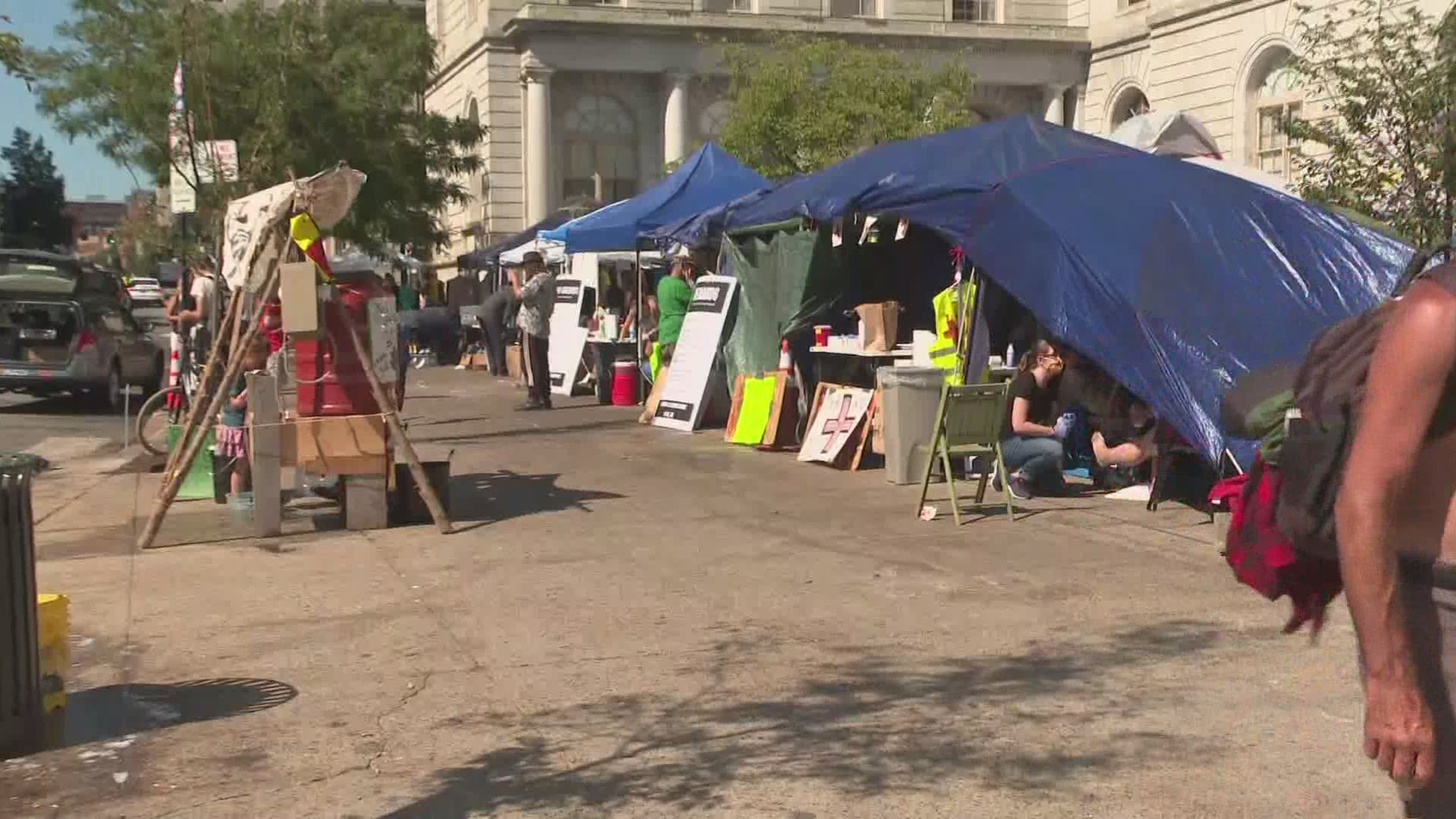 PORTLAND, Maine — Portland police are investigating reports of gunshots in the area of City Hall around 4:50 a.m. Saturday, nearby where protesters have been camped out for more than a week.

"I am definitely very scared and I feel very unsafe with it," Sarah Nouhan, 19, said.

Nouhan is staying at the camp at City Hall and said she has been since it started more than a week ago. She said shots fired early Saturday morning wasn't the first time the camp has gotten violent.

"There were fist fights. A lot of people got hurt last night," she said.

Police say a car stopped and the driver fired several rounds. No one was injured.

According to police, witnesses reported seeing a black vehicle driving east on Congress Street before making a U-turn in the area of Central Fire Station and stopping by Market Steet. A protester from the encampment approached the parked vehicle and threw a firework that exploded near the car. The protester was walking back toward the encampment when the driver of the vehicle discharged several rounds from a handgun before making another U-turn and driving east on Congress Street.

Witnesses described the driver as being a white man in his 30s with an athletic build and facial hair. Detectives are working to identify witnesses and locate video cameras from the area.

Police investigating report of gunshots in the area of City Hall at 4:50 AM. No one injured when driver of a vehicle stopped and discharged several rounds. pic.twitter.com/VxlNh21lDM

Police say two protesters were arrested for interfering with officers while they worked to investigate the shooting. Nicholas Closson, 38, of Portland and Jacob Jensen, 31, of Portland were both arrested for obstructing government administration. They were released on bail.

Police ask that anyone with information that could help the investigation please call 207-874-8575.

About 100 people have been camped outside of Portland City Hall, protesting numerous issues facing Portland's community. It's a group mixed of people experiencing homelessness and their supporters, and all of them plan to stay until demands are met.

Protesters are demanding Portland take action to better assist the city's homeless population. They're asking for the city to decriminalize camping out, defund the police and reallocate money for essential services, establish overdose prevention sites, create plans for permanently affordable housing led by impacted peopled and to extend the current eviction freeze.

On Thursday, Gov. Janet Mills expanded measures that were put in place at the height of the pandemic to protect renters from evictions. The order prevented evictions until the courts reopen on Aug. 3. The expanded measure extends the time frame for eviction notices but does not extend the eviction freeze altogether, which protesters listed as a demand. MaineHousing will also double its rental assistance from $500 to $1,000 through the COVID-19 Rental Relief Program beginning Monday, August 3. The expanded assistance is supported by an initial $5 million in Coronavirus Relief Funds.

We believe the combination can help renters while also not leaving landlords behind. My Administration will continue to work closely with @Maine_Housing and local agencies across the state to help keep Mainers housed. 3/

“Homelessness is a statewide problem that requires a collaborative response,” Portland Police Chief Frank Clark said in a statement Saturday. “The City Manager and I both believe that the situation as it exists in City Hall Plaza, however, is unacceptable in terms of public health, public safety and continuity of municipal operations. Officers have and will continue to respond to the encampment to address reported drug use, overdoses, indecent conduct, fights and other criminal and violent behavior that now includes gunfire. The crowd has surrounded and attempted to physically block first responders from both police and MedCU. Prompt steps need to be taken by the city and community partners to address the situation and enhance the safety of the public and city employees, including my officers.”

Protesters are here at Portland City Hall. One person we spoke to says she doesn’t feel safe here after last nights shooting and some other fights #NEWSCENTERmaine pic.twitter.com/w08XAgrSZ4

While NEWS CENTER Maine was reporting early Friday morning, our crew witnessed a few altercations between people staying at the camp, police patrolling the area multiple times per half hour, as well as even fireworks at one point.

Several witnesses told NEWS CENTER Maine that there were altercations later in the day Friday as well.

Portland’s mayor holds listening session in Lincoln Park to hear the concerns of the homeless and advocates who are camped out at City Hall Plaza. #NEWSCENTERmaine pic.twitter.com/hPbYlEpNrj

RELATED: Advocates and Portland's homeless get sit down meeting with Mayor

Many in the crowd of about 25 people shared their experiences with homelessness in Portland and criticized the city for not doing enough to help them.