While the fatal shot was self-inflicted, the suspect, Donald White, was also shot by a state police trooper. 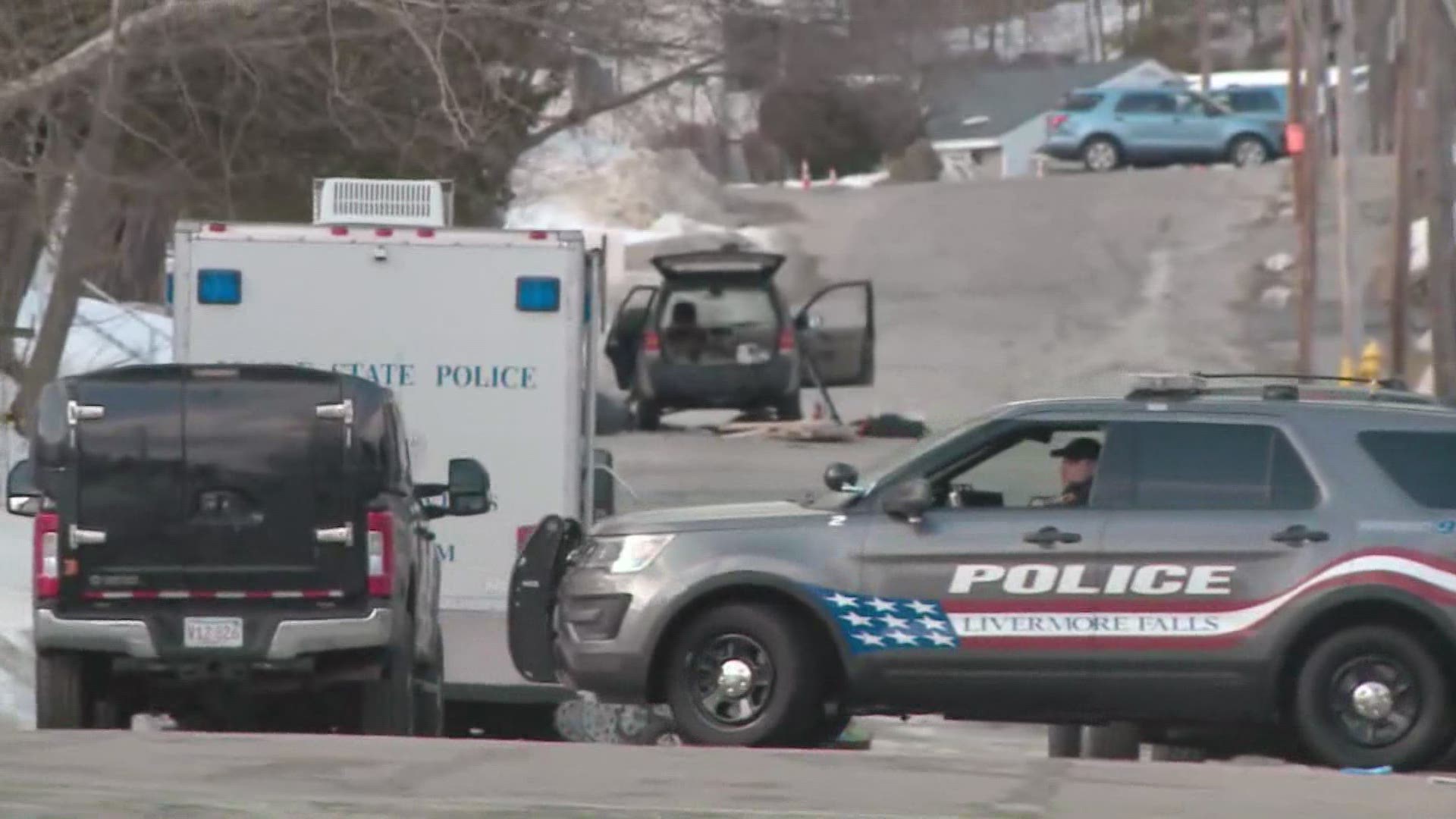 During a press conference Tuesday, Maine State Police Lt. Jason Madore said the suspect, who the Maine Attorney General's Office later confirmed to be Donald White, 44, of Jay, is dead.

On Wednesday, the Attorney General's Office said the Office of the Chief Medical Examiner determined White died from a self-inflicted gunshot wound to the head and that the injury he sustained from being shot by a state trooper was non-lethal.

The Attorney General's Office said, "the investigation of the trooper’s use of deadly force is continuing and no further details will be available until its completion."

As of 11 a.m. Tuesday, there were multiple explosive devices still in the home, according to Madore. The scene remained secured until police can made sure the area was safe.

Police said Tuesday night, the safety concerns at the scene and on Knapp Street have been addressed and it is safe for all residents to return to the area. An officer will remain on the scene.

#WATCH: We just spoke with Ken Smith, one of the hostages involved in the standoff in Livermore Falls. He was visibly bruised and says he just left the doctor's office. He says Donald White was his daughter's ex-boyfriend and describes a tense relationship. @newscentermaine pic.twitter.com/wC6o5grOHg

NEWS CENTER Maine spoke to one of the hostages, Ken Smith. He said he was awakened early Monday morning by Donald White. Smith said White told him to "just go along with it."

Smith said he knew White, and that White was his daughter's ex-boyfriend. Smith said he was tazed and cut by White during the incident.

Smith had visible scratches and marks on his body. NEWS CENTER Maine's Hannah Dineen asked how he was physically.

"I've got a big slash (on my leg) and I just came from the doctor's office...it was just a helluva night."

#UPDATE: The AG’s office identifies the suspect as 44-year-old Donald White of Jay. They also say Trooper James MacDonald with Maine State Police used deadly force on White when he fired his gun. Cause of White’s death, however, is still under investigation. @newscentermaine

Police officials were seen moving robots towards the home around 8:30 a.m. Tuesday for what seemed to be a search of the home.

NEWS CENTER Maine's Sean Stackhouse reported hearing a boom and seeing smoke coming from the area of the home.

Maine State Police now using a robot on Knapp St. in Livermore Falls following a nearly 24-hour hostage situation here. Troopers have asked for us to move further back on Knapp St. as this process takes place @newscentermaine #wakeMEup pic.twitter.com/SZkViLtftN

From there assistance was requested from the Maine State Police Tactical Response Team. Throughout the hours immediately following, multiple state, county, federal, and municipal agencies, as well as agencies from New Hampshire and Massachusetts, converged on scene to offer assistance and resources.

Livermore Police Chief confirmed to NEWS CENTER Maine that an armed man, who was known to the family, entered the home and took four people hostage. One of those people was able to escape.

Sage said the Maine State Police TAC team was called in to negotiate. An armored tactical truck and officials from the Androscoggin County Sheriff's Office also arrived at the scene early in the day.

NEW: @MEStatePolice and Livermore Falls Police will be holding a press conference this morning at 11:00 a.m. proving details on the hours long hostage situation/standoff on Knapp St. @newscentermaine

According to several sources, law enforcement help came from across New England, including special units from Massachusetts and New Hampshire.

One Massachusetts law enforcement source said they supplied local officials with equipment that was not available in Maine.

Debbie Pratt, a neighbor who said she knows the family that was held, said she saw everything happening early Monday morning when police arrived on scene and texted the owner of the house.

#BREAKING police say the last hostage in Livermore Falls is out and safe. @newscentermaine

"And like I said I saw everything that was going on and I texted him, I said 'Ken what's going on? I see lots of police around,'" Pratt said, "and he never texted me back, and then I heard it was actually him and I was like oh my god!"

The situation became more unclear as rumors circulated that a bomb had been placed at a local school.

A neighbor who claims to know the family being held hostage tells me she knows the family well and can’t believe what’s happening. “I texted him this morning and I asked him what’s going on, there is a lot of police around, and he never answered me back.” @newscentermaine pic.twitter.com/0VTJ7Z1ylx

Spruce Mountain School District Superintendent Scott Albert said he heard from the school resource officer around 10 a.m. that the suspect "might have placed a bomb in one of our schools, so we went through our protocol, dismissed all of the kids, and got them all home," Albert said.

NEWS CENTER Maine is still at the scene and will provide updates when more information becomes available.