'It's a difficult problem to solve': Bicycle theft on the rise in Bangor

Sergeant Wade Betters says residents have to secure their property better and not leave bikes unlocked or unattended. 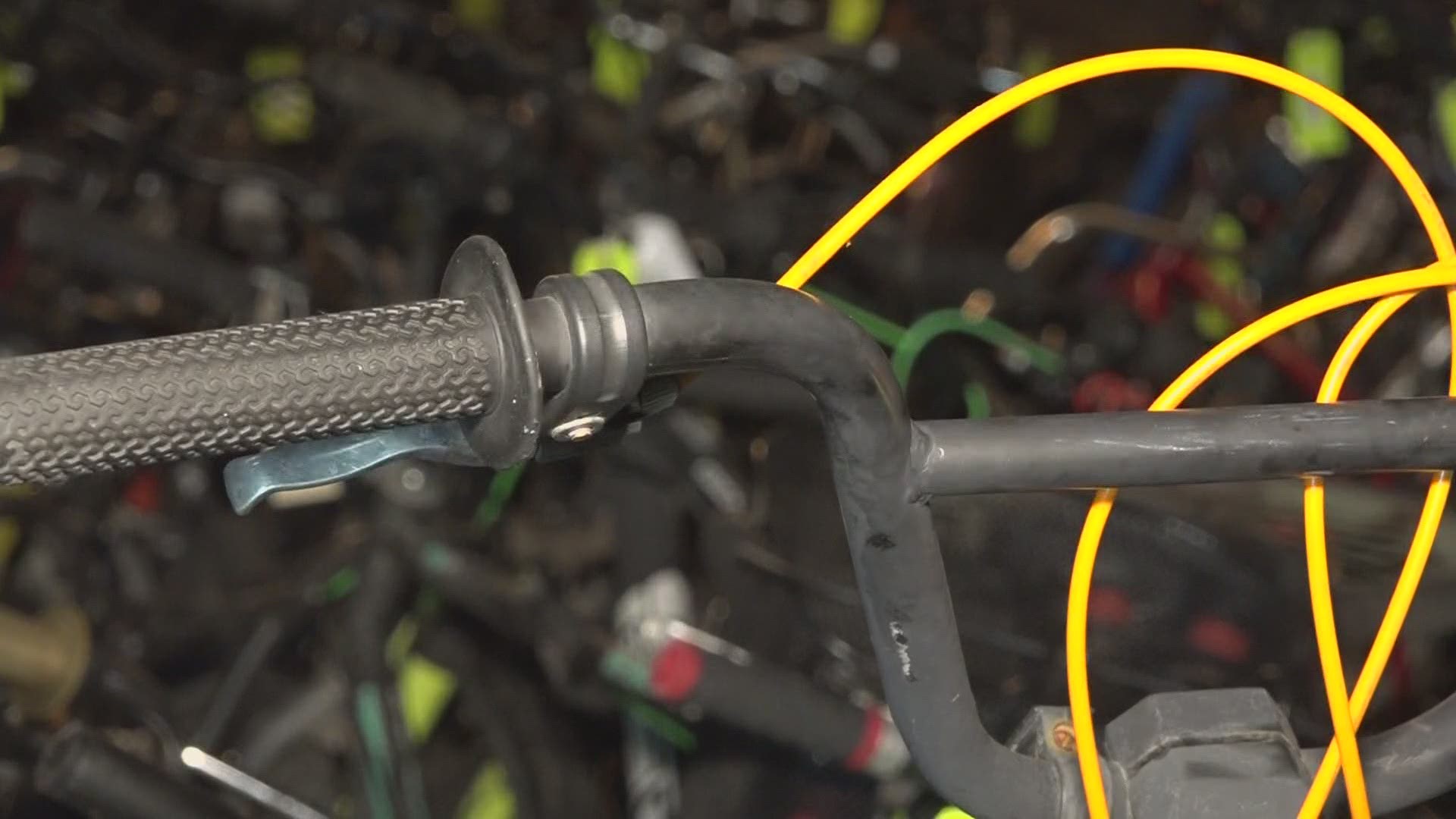 BANGOR, Maine — Hundreds of bikes sit in a Bangor Police Department warehouse after being stolen, but police officers can’t trace them to their owners.

Bangor Police Department's Sergeant Wade Betters said keeping your bike starts with simply always locking it up.  He said too, you should always write down the serial number and a complete description in the event you need to report it stolen.

"It's a sad state of the world that you can put your bike out on your back porch and have to worry that someone is going to come there in the middle of the night and take it...you got to remember there are definitely people out there every day looking for an easy chance to steal something in order to make some money, and its a very difficult problem to solve," said Sgt. Betters.

RELATED: The Bicycle Coalition of Maine's 'Slow ME down' campaign looks to stay in Bangor

Hundreds of stolen bikes. @BANGORPOLICE says it’s important to always lock up your bike in a safe spot, write down the serial number and a complete description, in case you need to report it stolen.

"It seems like weekly there is a new report of theft usually of bikes," said Bangor resident Jamie Beck.

Beck said many neighbors have opted to add surveillance cameras.

"It's very common for us to get reports of stolen bicycles or for us to respond to picking up abandoned bicycles," added Sgt. Betters. "Most of those bikes end up ultimately at the police station where we try to identify the actual owner of the bike."

Sgt. Betters said it's common for the organized bike thieves to immediately alter the appearance of the bikes when stealing them.

"I've heard going around of having a bike registry," said Beck.

Sgt. Betters said a registry is not the most effective solution because most of the time stolen bikes are later recovered stripped down, with missing pieces, no serial number, and even painted in a different color.

Officers can only link bikes to their owner if they report the bike missing and have a way of proving it's theirs.

"I'm going to be putting up a shed pretty soon here just to kind of, out of sight out of mind," said Beck, to secure the bikes of her kids.

Betters said they work hard to track down those who commit thefts in town, just this Wednesday, 32-year-old Alex Murphy was found in a backyard shed on Forest Avenue in Bangor, the homeowner hadn’t given Murphy permission to be in the shed or on his property.

"Murphy was found in possession of several bicycles and bicycle parts. Two of the bicycles had been reported stolen from a Garland Street resident two weeks prior. Those bikes have been returned to their rightful owner," said Betters.

Due to this incident, Murphy who was out on bail due to pending charges in southern Maine, was arrested and taken to the Penobscot County Jail.

"We currently have several hundred bicycles in storage right now that are most likely going to end up being sold at a police bike auction," said Betters.

The Bangor Police Department holds a bike auction once a year to clear out its shed. Due to COVID restrictions, there was no auction last year, so hundreds of bikes will be available at the auction later this year. NEWS CENTER Maine will report once that date is set.