'An act of arson and of political terrorism': Donkey sculpted by local artist burned overnight in Bowdoinham

The donkey was on the Main Street front lawn of a former Bowdoinham selectwoman, and was sculpted by a local artist and bus driver. 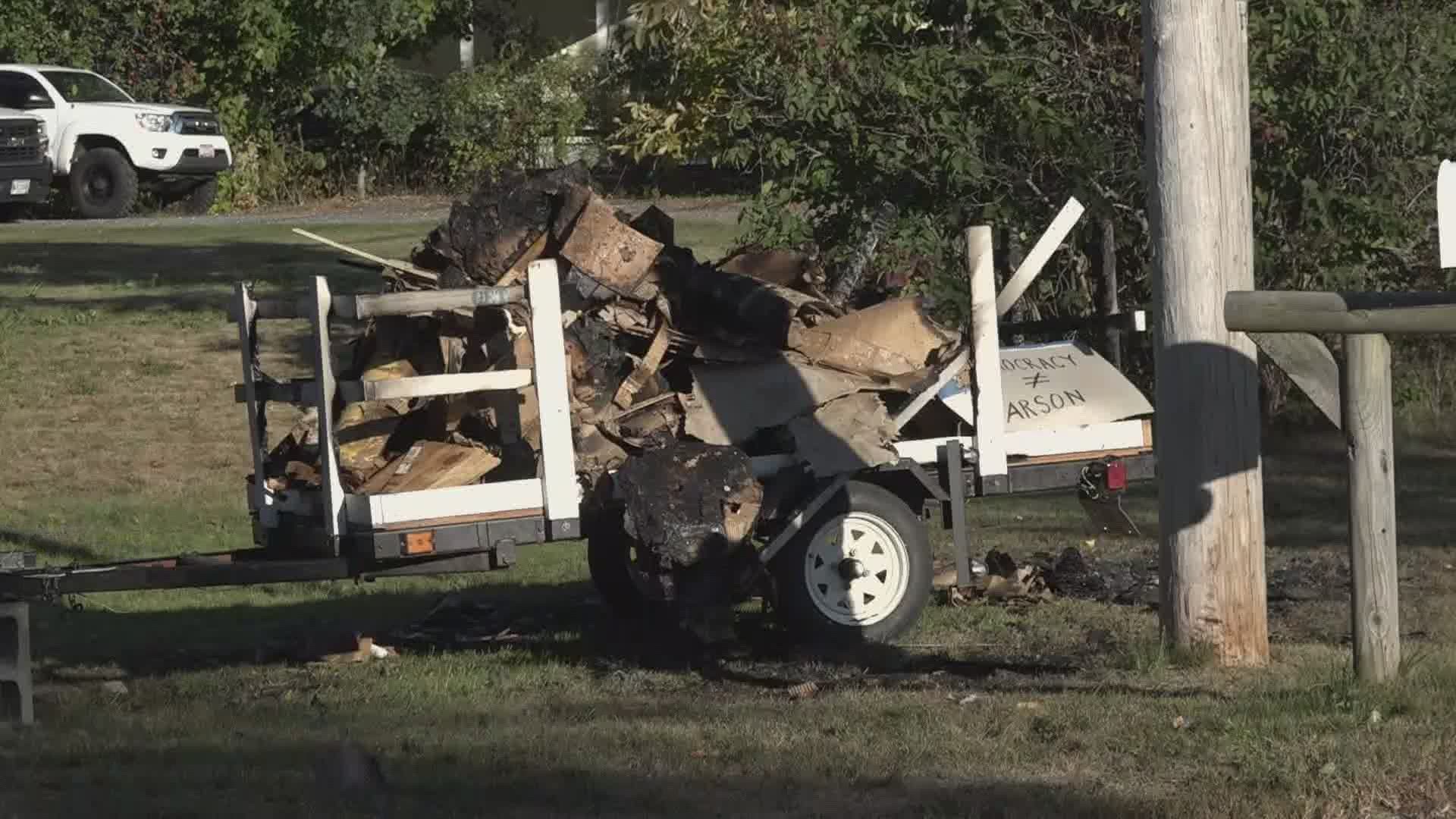 The sculpture went up in flames around 1 a.m. at the home of Theresa Turgeon, Gracia Woodward, and their two sons. Turgeon's son saw the flames and alerted the rest of the family, but by the time fire officials and law enforcement showed up the donkey was completely destroyed.

The Sagadahoc County Sheriff's Office and the Maine State Fire Marshal's Office are investigating. Anyone with information is asked to call 207-624-7076 and refer tips to investigator Ken MacMaster.

Turgeon is a former Bowdoinham selectwoman who served for six years. She said she's currently running for the town's select board again.

"For 51 years, I have felt safe in Bowdoinham.  It has always been a place where doors are unlocked, and acts of violence only happen in the news.  But not anymore," Rep. Seth Berry (D-Bowdoinham) wrote in a Facebook post Saturday morning. "An act of arson and of political terrorism was committed on the private front lawn of two constituents, living right on Main St in the heart of our town."

"The only thing as far as safety is concerned is, given the drought and how quickly things could burn, I was just glad [the fire] was out in the open and not near trees," Turgeon said. "I think it would have been disastrous then. Whoever it was does not care about safety of anybody."

The sculpture was built by Doug Chess, a local artist and bus driver, using layers of wood, wire, cardboard, fiberglass, and paint, as well as other materials.

The donkey, named "Mr. H," took Chess two full years to build, according to Berry. It had been circulating to different lawns throughout the Bowdoinham and Richmond communities, and had only been on Turgeon's lawn since Friday.

When asked if her status as a former selectwoman and current candidate factored into the crime, Turgeon said she doesn't think it was a personal attack but rather an attack on the Democratic symbol.

"I don't think it was personal to me. I can't imagine that it's personal to me," Turgeon said. "I think it's because there was a donkey and Democratic. I personally think that's what it's about."

"He was larger than life, perhaps 7 feet tall, maybe 9 feet on his nice new trailer. Like any good donkey, he was built to last, and strong enough for a grown man to ride on," Berry wrote. "Last night, it took less than two cowardly minutes to set him on fire, and twenty minutes to destroy him."

"It is just so upsetting and a bit scary," Susie Reinheimer, a neighbor, said. "That someone would destroy someone's artwork. That man spent two years on that."

Members of the Bowdoinham community gathered at 10 a.m. Saturday at the home on Main Street where the donkey was burned, to commemorate the sculpture's brief life and to honor his creator. Turgeon said Chess led everyone in a moment of silence for the late Supreme Court Justice Ruth Bader Ginsburg, and encouraged everyone to embrace her example of someone who sticks to it and keeps going forward.

"One thing that really hit me - he said, 'don't be angry, be sad,'" Reinheimer added.

"Mr. H is dead, but we fully intend to make sure his memory and his message live on," Berry wrote.