'We will not forget them.' Freeport Flag Ladies and others honor those lost on 9/11

The 'Freeport Flag Ladies' returned to their usual corner, and the town held a ceremony to remember the men and women killed in the 9/11 attacks 20 years ago. 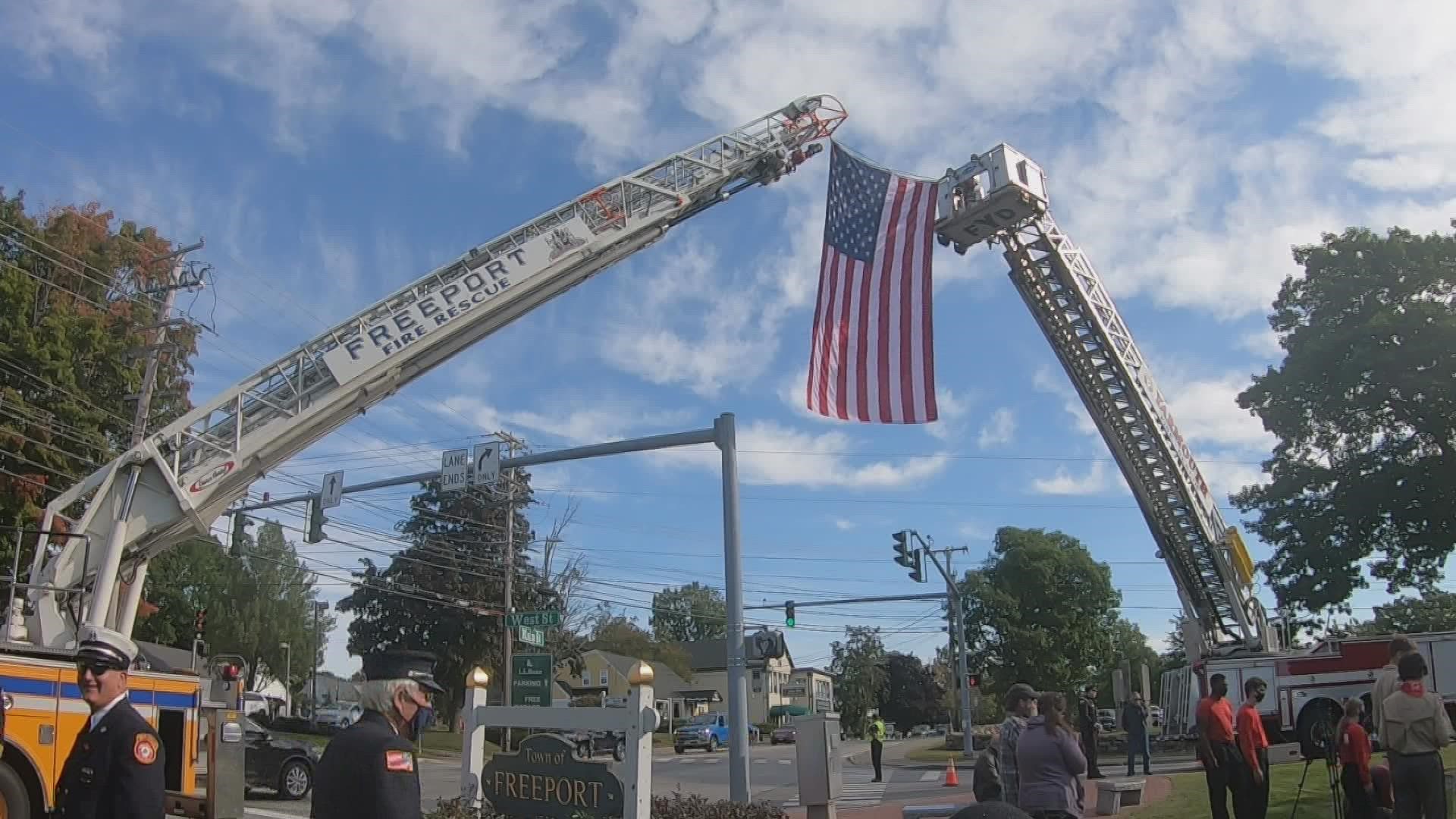 FREEPORT, Maine — A few days after the 9/11 terrorist attacks, former President George Bush asked Americans to light a candle in honor of the nearly 3,000 people whose lives were taken that day.

Elaine Greene was one of the millions who did just that. But the Freeport resident and a few neighbors went a step further. On the evening of September 11, 2001, they came together on Main Street, flags in hand.

“I ran back into the house and grabbed a flag which I didn’t realize I had there. I must have subconsciously realized it," she added.

She didn't know it back then, but her life was about to change the second she raised that flag for the first time on the corner of Main and School Street. Folks driving by and honked or waved at the sight of the American flag. It was the start of a weekly tradition.

Greene and the 'Freeport Flag Ladies' returned to that spot every Tuesday, the day the attacks on the Twin Towers occurred, for 18 years.

“Every time I hear a beep, I feel my nation is a little bit better in that moment because that person is connected to their country. Not to me, to their country, to what it means to them to be an American," Greene added.

The 'Ladies' are technically retired from their post. But they returned to the corner on the 20th anniversary of a day Americans will never forget.

“We weren’t there to tell you what to think. We were there to remind you to be thinking. Get involved, be a good neighbor, be a good citizen," Greene added.

Old friends came out to see Greene and the others as they exchanged hugs and caught up during the two-hour event Saturday. Greg Lozier was one of them.

He is the President of the Maine Chapter 2 Patriot Riders of America. He and others planned on attending a different ceremony, but when he heard the 'Flag Ladies' were making a return, he said it was a "no brainer" to join them.

“It’s [times] like this that we can’t forget we’re all Americans, we’re all Patriots, or we all should be. And I think this symbolizes and strengthens that patriotism," Lozier added.

Down the road in Freeport, the town held its own ceremony at the Public Safety building with an American flag raised high in the ski by two fire engines and near two steel beams from the Twin Towers.

Another structure near the beams summarizes the message of Saturday's events around Freepoint. The stone monument is inscribed with "We Will Remember...United We Stand."