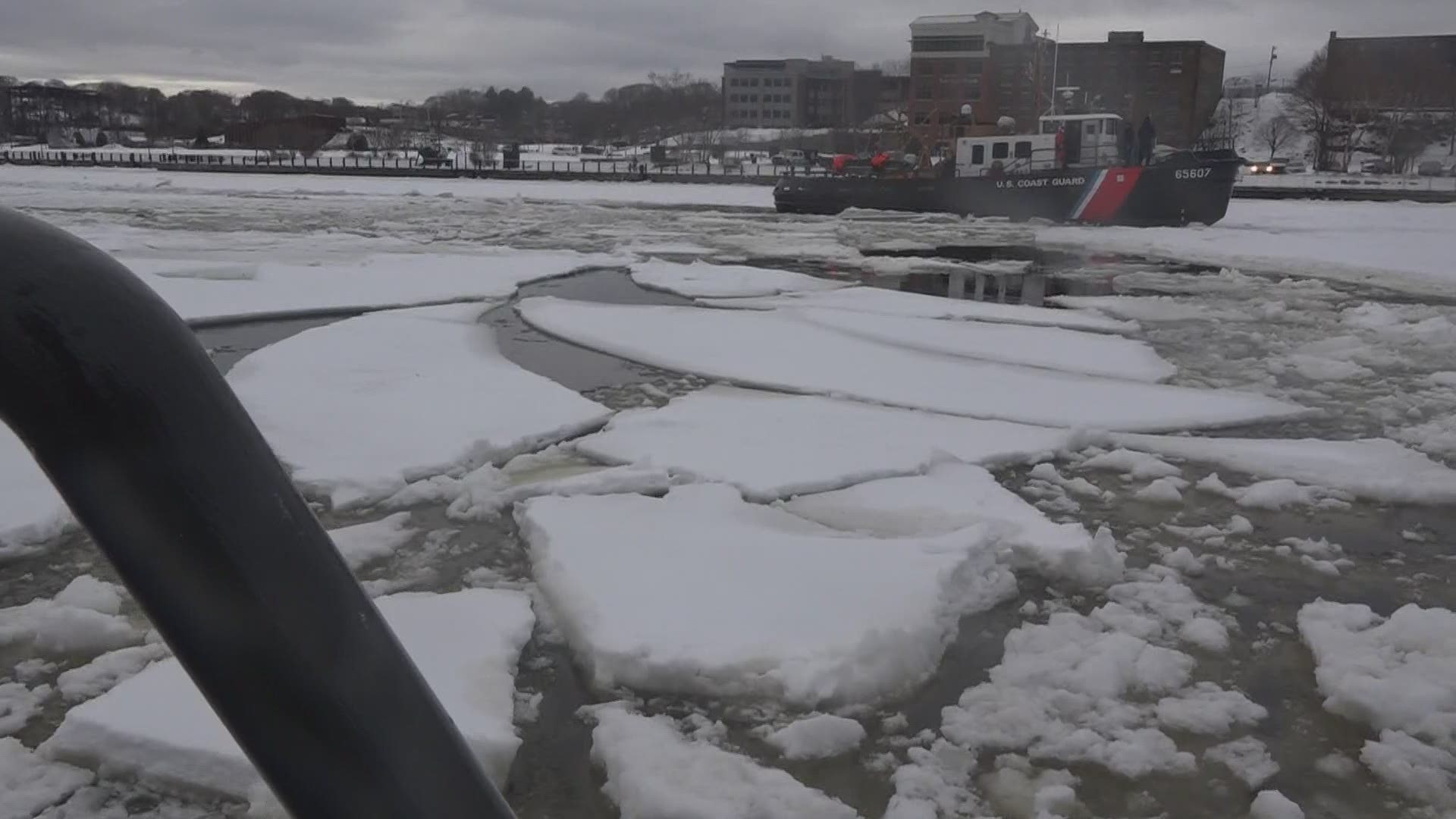 BANGOR, Maine — It's the most exciting task some U.S. Coast Guard ships in the Northeast have on their winter agenda. They are tasked to break up the ice that has been forming along parts of the Penobscot River.

"We are not looking to let the ice build-up anymore, we are looking to flush it down the waterway and break it up, and that's where the flood control for the city of Bangor comes in," Caron Gillum, an officer in charge of Coast Guard Cutter Tackle, said.

An important mission to keep the river open so heating oil can be shipped up and down to cities and towns, to reduce the chance of flooding in Bangor later in the season, to keep the waterways clear in case of rescue missions, to ensure the safe passage of cargo ships, and commercial fishing vessels.

"If we don't have this broken out local communities might not get heating oil and supplies," Gillum said.

Besides a pair of smaller ships, Bridle and Tackle, the U.S. Coast Guard's Thunder Bay joined the effort to help lead the way on Wednesday.

"The Thunder Bay is a 140-foot ice breaker. They can break a lot thicker ice than we can, so what we are going to ask them to do is cut a large channel for us, and then we are going to chip away at the edges, and then we have the ability to work in shallower waters and in tighter conditions," Gillum said.

I had such a fun day yesterday aboard @USCGNortheast “Tackle” as members of the U.S. Coast Guard used 3 cutter ships to break through the ice that has formed on the Penobscot River. The highlights tonight on #NEWSCENTERmaine. pic.twitter.com/EzFRW8N4M0

The first Wednesday of February was the first ice-breaking mission the U.S. Coast Guard held for the winter, but crew members tell us they will keep coming once or twice a week depending on how thick the ice forms back.

According to the U.S. Coast Guard, the operations are in support of "Operation Reliable Energy for Northeast Winters" (OPRENEW), an effort to ensure communities across the Northeast from New York to Maine have the security, supplies, energy, and emergency resources they need throughout the winter.

"There is a lot of training, preparation, and maintenance that goes on throughout the year to ensure we are ready to answer the call during what we call 'ice season'", said Chief Petty Officer Shae Currington, an officer in charge of Coast Guard Cutter Shackle. 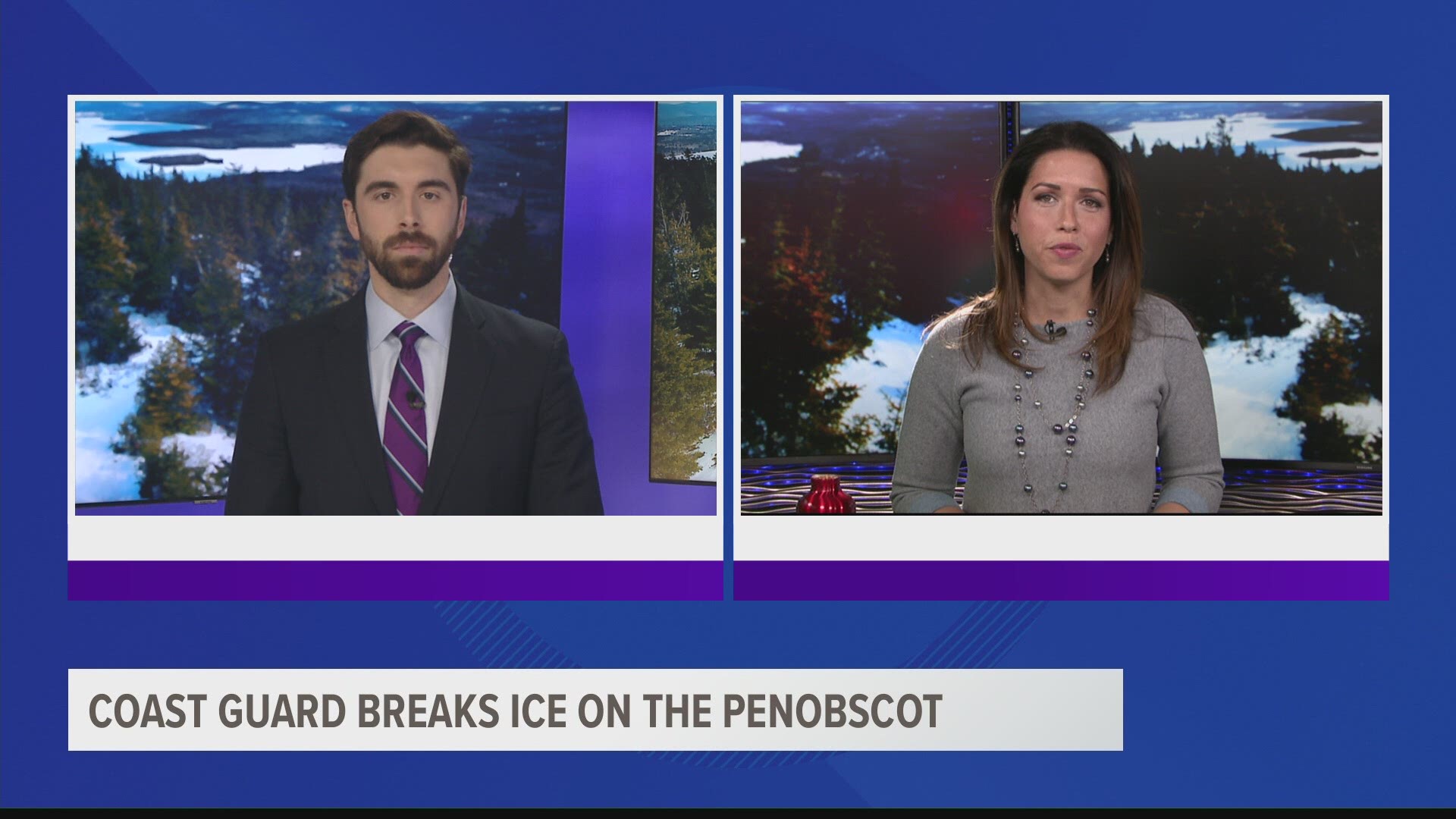 A member of the U.S. Coast Guard says "85 percent of all home heating oil used in the U.S. is consumed in the Northeast, and 90 percent of that is delivered by ship on a Coast Guard-maintained waterway."

Coast Guard ice breakers are currently operating from New York City to Maine, breaking ice on major waterways including the Hudson River, the Connecticut River, the Merrimack River, and the Penobscot River.

It takes almost all day to break through six to 10 inches of ice on the Penobscot River.

"The ice has been very thick so we might have to hit it a few times, to break it up and let it flush out," said Ryan O'Hare, officer in charge of the Coast Guard cutter Bridle.

O'Hare says the COVID pandemic has made things more challenging.

"Honestly, we're such a small crew if we lose one person due to covid, that will take out the whole ship and we will lose operations, so it's definitely been tough," O'Hare added.

An important but fun job, the Coast Guard ships do this task repeatedly all winter long to keep the river flow open.

"If we were out here by ourselves it might be a lot difficult, but because we are working together as a team that's what's making this job a lot easier to do!" says Gillum.