The public library will be on the ground floor. The upper floors will house two AIRBNB suites, which will help pay for some of the library expenses. 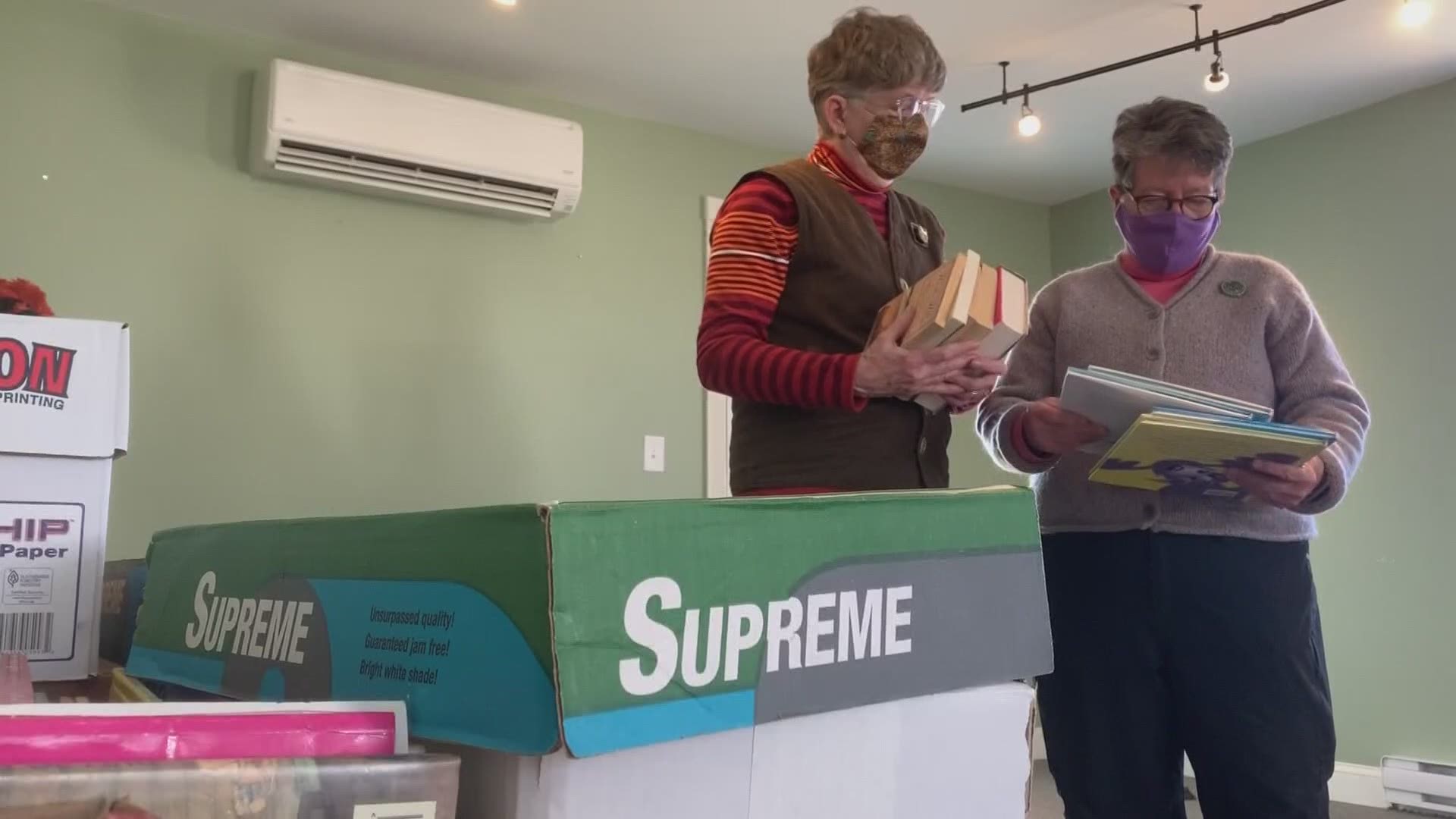 UNITY, Maine — Two women in the small town of Unity are opening up a new Unity Public Library.

Unity residents Jean Bourg and Melissa Bastien bought the building late last year with hopes of opening a new resource in town for everyone to use.

"We walked into it and said, 'It's a library! It's a library waiting to happen,'" said Bastien. "It's in walking distance to anything and everything here in town!"

The ladies say there is a lot of excitement in the area for the new library and every Saturday they are receiving dozens of book donations from neighbors who support the idea.

The building was formerly owned by the Maine Farmland Trust. It has two floors. Downstairs, they plan to have the library, and upstairs there are two AIRBNB suites they plan to rent out to help cover some of the library expenses.

"We are hoping to use that revenue to pay the cost of the mortgage and building up key taxes," added Bastien. "We have one grant submitted already!"

"We will be looking for ways, combinations of grant writing and establishing an endowment so that the library can be as independent as possible and not have to rely on tax money's and the taxpayers raising funds to run the library," said Bastien.

Right now, volunteers are focusing on categorizing and organizing the books and there are some local workers who are making bookshelves.

"I'm very excited for it. I just got an email from my library at school that said 'we have some books to donate' and I said, 'I know exactly where they can go,'" said Rose Hill, who stopped by on Saturday to donate two full boxes of books.

Bastien and Bourg say they can't cover all of the expenses of the project themselves. They have requested $50,000 dollars from the town of Unity to get the Unity Public Library up and running.

"We need that and more because we are going from zero to library, and we'd like to do it in a year, rather than five years," said Bourg.

Bourg says, with that chunk, they will purchase book cases, computers, software, tables, chairs, desks, among other things.

"We have asked for funds through the local tax incentive funding program, which is called the TIF fund," said Bastien.

They have submitted a voter's petition, which town officials are expected to discuss at a town meeting, held at the end of May or early June.

Not everyone in town supports the idea of funding a new library because there is already a public library at the town's local college.

Penny Sampson is the vice-chair of the board of selectmen for the town of Unity. She said, "I can't imagine a town of 2,000 people needs two libraries."

Sampson says the selectmen have not seen anything as to how those tax dollars will be protected in their investment of $50,000, an amount the economic development committee, the selectmen, and the voters all will vote on.

Sampson defines her concerns: "The first is the price tag that we've seen of the $50,000. Second, is the circumventing of the normal protocol for the request of TIFF money. The third concern is in the future asking for additional tax dollars to support a library when we already have one," said Sampson.

The library at the college has been closed for the last year due to the pandemic.

Melik Peter Khoury is the president and CEO at Unity College. He tells NEWS CENTER Maine that the Dorothy Webb Quimby Library on campus is just serving its students electronically, due to the ongoing pandemic.

"Currently we are not serving the wider public due to the pandemic we are not doing any face-to-face service until it is safe to do so," said Khoury. "It all depends on the federal guidelines, CDC, our ability to ensure the health and safety of our employees, and then hopefully we can reopen it to the public, that is the goal."

Khoury added the books the library has inside range from children's books to science journals, novels, fiction, CDs, he says anything you can find in a college library, Unity College has. He plans to re-open the facility once it's deemed safe to do so.

The concern about funding the new library is not detering Bastien and Bourg. They say there is enough energy and momentum in town for the new Unity Public Library and they are confident voters will vote to approve a one-time sum of money to support it.

"We hope to be able to open in some very limited capacity by the end of this year!" said Bourg.

If you would like to donate any books, computers, or money for this effort, the Unity Public library is located at 38 School Street in Unity and it is currently accepting in-person donations on Saturdays from 10 a.m. -12 p.m. If you want to mail out a book, you can do so at P.O. Box 338 in Unity, 04988.