After multiple delays related to COVID, the parts supply chain, and the complexity of the turning mechanism, Barter’s Island has a new bridge 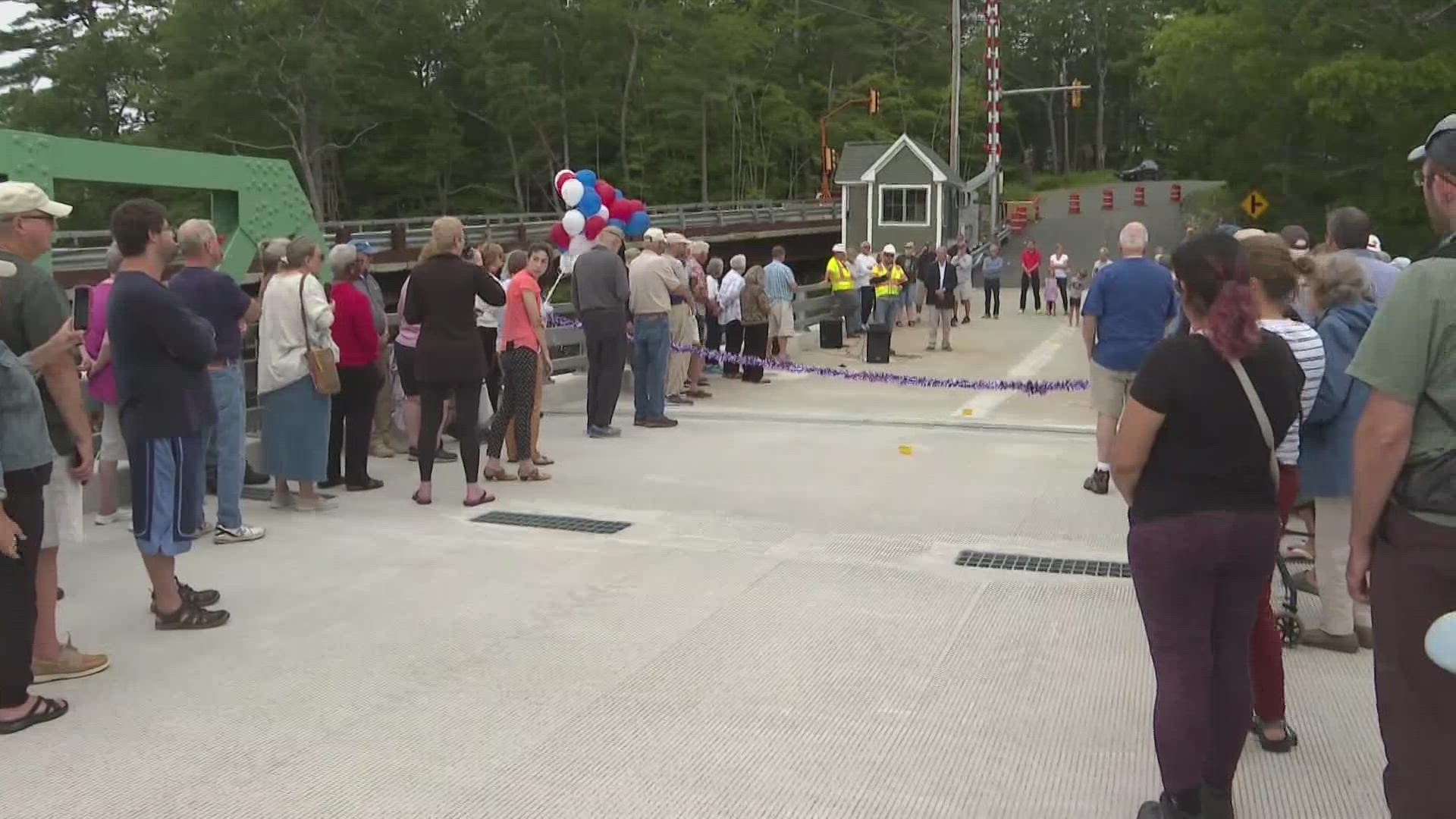 BOOTHBAY, Maine — It was a Monday morning party, 20-feet or so above the Back River, and as Glenn Philbrook began to speak, there were fireworks. Real fireworks.

Philbrook, the Maine DOT resident engineer for the Barter’s Island bridge project, smiled and then laughed. The crown of 50 to 75 people laughed with him.

They had all been waiting nearly two years for the moment.

The 88-year-old Barter’s Island drawbridge was closed and torn out in November 2019. People on the island and other parts of Boothbay have been using a narrow, clanking, one-lane temporary bridge ever since, eagerly waiting for the new drawbridge to be ready.

Multiple delays, related to COVID, the parts supply chain, and the complexity of the turning mechanism for the bridge all combined to slow the work significantly. On Monday, it was ready, at last, and local people were eager to celebrate.

“We thank Reed and Reed for all the work they have done to make such a lovely bridge we’ll be crossing,” said lifelong resident Joan Hodgdon, as part of the ceremony.

She reminisced about life on and near the bridge several generations ago when she said kids would rush to the hand-cranked bridge whenever they hear a horn blow for it to open. The kids would turn the crank to open and close it, then run to the nearby store for a piece of candy as payment.

Hodgdon’s husband, 90-year-old Stan Hodgdon, was one of those kids, and later on, became the bridge tender as a grownup—as did others in his family.

He was chosen to make the ceremonial first drive across the new bridge, which turns almost silently and much more quickly by electric motors.

“Pretty smooth compared to the other one,” Hodgdon said, likely referring to both the temporary span and the old bridge.

Philbrook of the MDOT said they were all as happy as the islanders to get the bridge open.

“Today is a very big day for us. We appreciate all the effort of Reed and Reed, and especially the patience of the community for bearing with us in putting together this very complicated bridge- in the middle of a COVID epidemic,” the engineer said.

“We’re excited to be here today, to put traffic on it, and next week we should have it open to marine traffic as well.”

Reed and Reed still has to tear out the steel temporary bridge, which Phillips said would begin with the wider section that is still blocking taller boat traffic, such as sailboats, from traversing the Back River. Lobster boats also use the passage. He said once that is done, they will remove the rest of the temporary bridge then restore all the areas away from the new bridge that were affected by construction.

But for those on Barter’s Island and Trevett, the local name for the section of town on the mainland side of the new bridge, the wait is over. As the orange barrels blocking the roadway were moved, cars quickly began using the new 110-foot swinging bridge, which cost just under $9 million to build.

Rob Wheeler said having their bridge back will make island life a bit easier.

“It just makes us feel part of the overall community of Boothbay. We like the bridge but we like to easily get back and forth across the island.”

The new span won’t be cranked open by kids, but it should keep all of them well connected for a lot of years.