Mia Dawbin is breaking a barrier by achieving the Eagle Scout rank after making more than 200 care packages for homeless adults and kids in a time of great need. 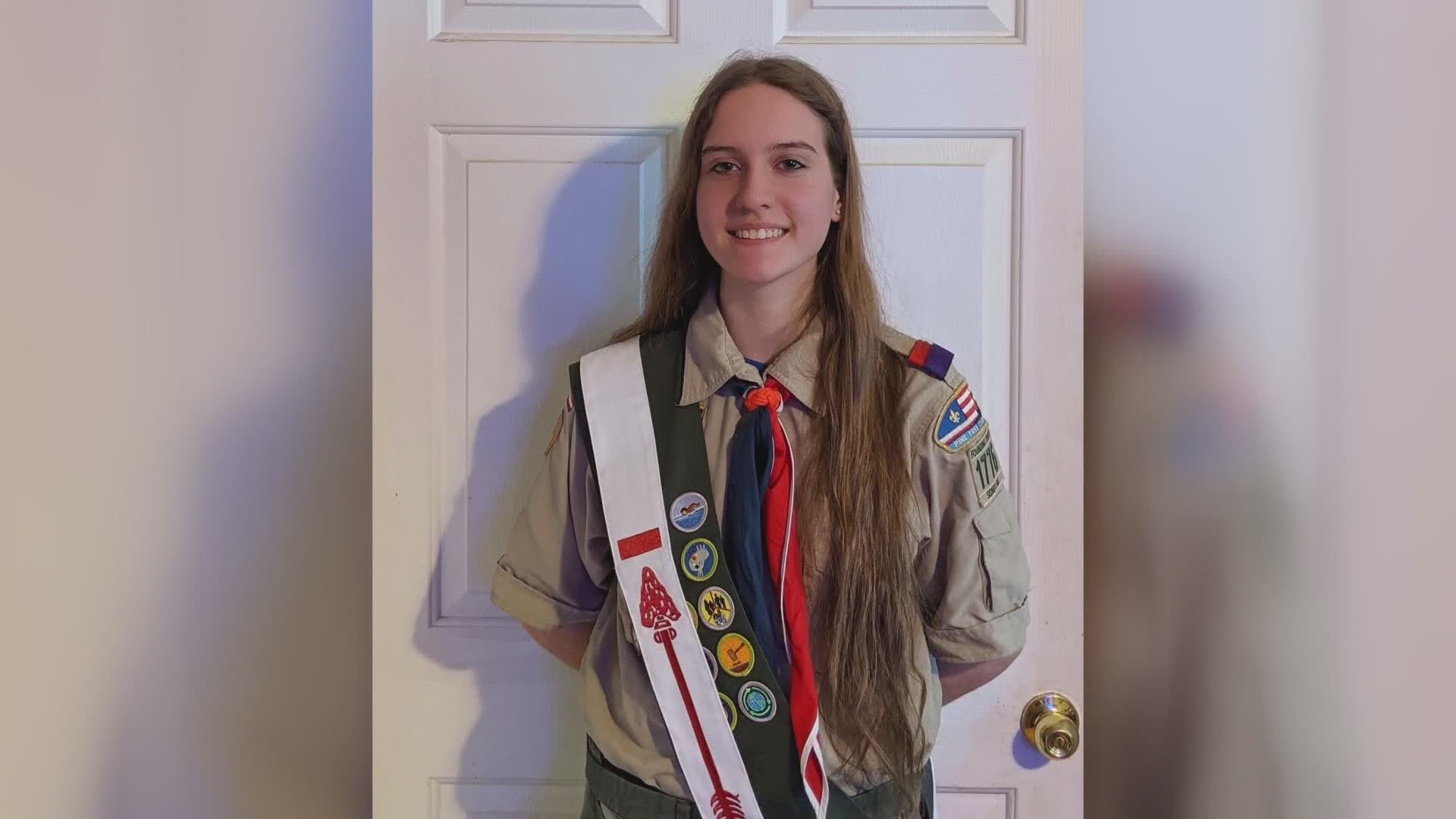 18-year-old Mia Dawbin is the first female Eagle Scout in Maine. Sidney Boy Scout Troop 1776 is one of the first Maine troops to welcome girls, and now it's called Scouts BSA.

"It's not Boy Scouts or Girl Scouts, it's scouting. With the Boy Scout program though, it brings a lot of independence to our young women where they can learn that they can go and survive and have the skills and the means to learn to be independent," said Luanne Chessley, the district advancement chair for KValley district and part of the Pine Tree Council advancement committee.

Mia Dawbin is breaking a barrier by achieving the Eagle Scout rank after making more than 200 care packages for adults and kids in a time of great need. Dawbin's community project helped hundreds of homeless people with essential items like deodorant, toothbrush, masks, and other hygiene items.

"Anything that you set your mind to you can accomplish, especially if you can find a support system of people who are willing to help you out with some of the challenges that you are having, and they don't need to listen to anything who disagrees with their goals and what they think their life purpose is," Dawbin said.

"I've seen a lot of the kids that go through the program that I work in becoming Eagle Scouts over the years, so it's nice to finally be able to get a chance to have that recognition myself," Dawbin said.

50 of the care packages Mia made went to the Mid-Maine Homeless Shelter in Waterville.

"So we have people come in off the streets that don't necessarily need a bed but they need a little help, so we are able to share them with the community that way," said Tanya Fossett, Mid-MaineHomeless Shelter and Development's director of communications.

"She went for what her goal and dream was because two years ago this didn't happen for females," said Chessley.

Dawbin said the most challenging part of the project was to fundraise and get donations for the bags during a pandemic, she got creative and with the help of her troop did a successful painting auction that helped her raise some money.

"My troop got together, and I got them to do some paintings for me and posted them online and we held a virtual art auction," said Dawbin.

"Nothing stopped her in being able to carry out this project that was so deep within her, to help others," said Chessley.

"She did it on her own, I was so supportive and now it's like...there you did it and I take pride in that!" said her father, Butch Dawbin.

Mia hopes her example can set the path for other teens to make a difference in their communities.

"They can have the same interests and hobbies that are more stereotypically for boys growing up, and there is no problem for them doing the same kinds of activities," said Dawbin.

Mia tells us she has enrolled at the University of Maine at Machias and plans on studying education and psychology.